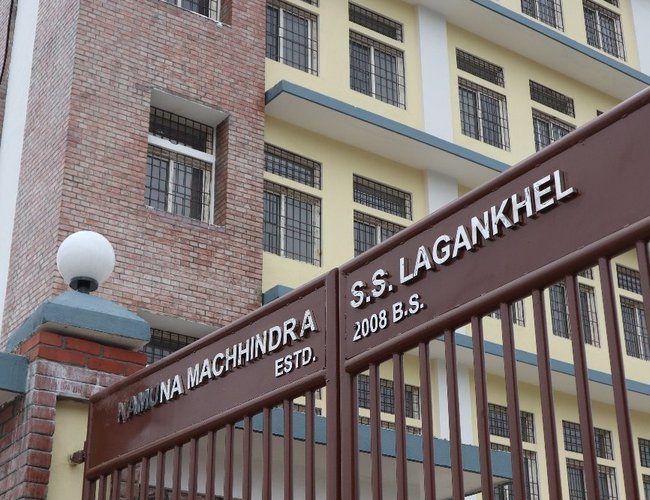 The earthquake of 2015 had destroyed the building of Namuna Machhindra Secondary School, one of the oldest public schools in Lalitpur. Pledging to provide necessary support to construct an earthquake resilient modern school there, JICA extended a supportive hand.

Severely damaged by the 2015 Gorkha Earthquake, such school buildings are reconstructed under the Emergency School Reconstruction Project (ESRP), a Japan assisted project. It will reconstruct 274 schools by November 2022.

In the presence of Prime Minister Sher Bahadur Deuba, Japan handed over the newly reconstructed building of Namuna Machhindra Secondary School to the school management committee.

On behalf of the Government of Japan and JICA, Ambassador of Japan to Nepal, KIKUTA Yutaka sent his congratulatory message to the Government of Nepal and all the people who have made contributions under the ESRP, in particular, the team of Namuna Machhindra Secondary School.

The Ambassador pointed out that this school has a facility for visually impaired students, thus reconstructed with a "Child, Gender and Disabled (CGD) friendly" concept called “Omoiyari” (Japanese spirit of caring others), being equipped with such facilities as reduced steps, braille blocks and handrails.

Ambassador Kikuta continued by expressing his hopes that all students can enjoy their school lives in a healthy and safe environment. The Embassy of Japan in Nepal hopes the ESRP schools further strengthen the relationship between Japan and Nepal, and the friendship between the peoples of the two countries for future generations.

Built under a grant assistance of the Government of Japan, the newly reconstructed buildings of Namuna Machhindra Secondary School–also a Resource Class based Integrated School for Children with Visual Impairments in Nepal, was handed over to the school management committee on September 15.

The school situated in Lalitpur was damaged by 2015 Gorkha earthquake. Since then the school faced difficulties in managing classrooms and education for the students.

Established in 2008 BS (1952AD), the school now has nearly 500 students, at levels from ECD to grade 10, including 37 students with Visual Impairment. The reconstruction of the facilities initiated in November 2019 under the Emergency School Reconstruction Project (ESRP) was supported by JICA.

The Project is being implemented by Central Level Project Implementation Unit of NRA. The new buildings were reconstructed with multi-hazard resilient structures which are environment, child, and gender and disabled friendly to provide improved learning environment for the students based on the concept of Build Back Better (BBB).

According to JICA, in the new school, there are classrooms with furniture for Early Childhood Development (ECD) to grade 10, science laboratories, a resource classroom, separate hostel rooms for boys and girls, kitchen and dining hall for the students with visual impairment. Also included are office rooms for head teacher and teachers, separate toilets for girls and boys with water supply in each floor of the academic and hostel block, hand washing facilities, tactile pavement, and handrails in the hostel block.

Speaking at the handover and inauguration ceremony Prime Minister Deuba appreciated the generous and valuable support of the Government of Japan not only in Education sector but also in different sectors in Nepal including education since a long time. He thanked all stakeholders for close collaboration and efforts for completion of the really inclusive school reconstruction.

Chief Representative of JICA Nepal Yumiko Asakuma also expressed pleasure to hand over such multi-hazard resilient school facilities with universal design, and expectation for JICA’s contribution to quality education. She also hoped for periodic maintenance and effective utilization of the provided facilities.

Emergency School Reconstruction Project (ESRP): Total 236 schools are being built and reconstruction of 38 additional schools started in January 2021 at a total cost of JPY 14 billion (about NPR 12.7billion) to support the reconstruction of disaster resilient schools in Gorkha, Dhading, Nuwakot, Makwanpur, Rasuwa and Lalitpur Districts, based on the earthquake-resistant type design guidelines formulated by JICA under the principle of “BBB”.