Goddess Kalratri is believed to be the fiercest form of Durga, and her appearance often invokes a feeling of fear. She is the destroyer of all demon entities, ghosts, spirits and negative energies, who flee upon knowing of her arrival. 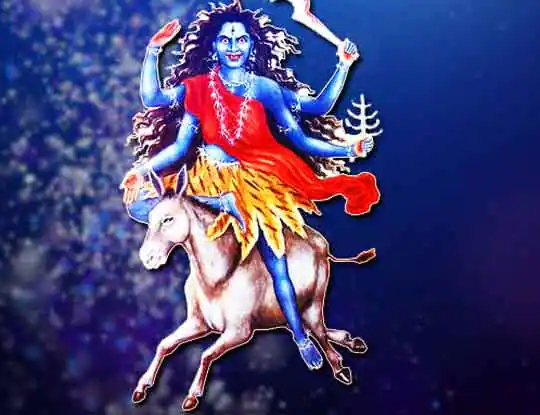 Today is the seventh day of the nine-day auspicious festival of Navratri which began on October 7 and will end on October 15. Each day, a different avatar of Goddess Durga is worshipped and on the 7th day or Saptami, devotees seek blessings of Maa Kalratri or Kalaratri, also known as Kaalratri. Devi Kalratri is regarded as one of the many destructive forms of Maa Shakti which includes Kali, Mahakali, Bhadrakali, Bhairavi, Mrityu, Rudrani, Chamunda, Chandi and Durga. Often Kali and Kalratri are used interchangeably but the two deities are separate.

On the 7th day (Saptami) of Navratri 2021, Maa Kaalratri is worshipped. Devotees will worship Goddess Kaalratri (Kalaratri) on October 12. She is the fiercest and most violent avatar of Maa Durga and she is the destroyer of all evil and negative energies.

Maa Kaalratri rides a donkey and wears a garland of skulls around her neck. Kaalratri in Sanskrit means the one who brings death and darkness. The iconography of Devi Kalratri is described as –her complexion is dark black and is depicted riding on a donkey. Maa Kaalratri is described to be four-handed, with her right hands being in Abhaya and Varada Mudra. She is shown carrying a sword and the deadly iron hook in her left hand.

Devotees offer kumkum, red flower and roli to Goddess Kalratri. Offer a garland of lemon to the goddess and lit an oil lamp in front of her. Offer red flowers and jaggery to her.

After this, recite the above-mentioned mantras or recite Saptashati to please the goddess. On this day, God Shiva and God Brahma are also worshipped after worshipping Maa Kalratri. Kalratri is also associated with the crown chakra (the Sahasrara chakra). She bestows the believer with siddhis and niddhis, namely knowledge, power and wealth. Also known as the ‘Shubankari’ which means auspicious in Sanskrit, it is said that the goddess gives auspicious and positive results to her devotees, making them fearless. She is also known by the names Raudri and Dhumorna.

Grey colour is advised on the seventh day of Chaitra Navratri. It symbolises the strength of transformation.

Worship Maa Kalaratri and offer jaggery (gud) or ladoos made of jaggery,