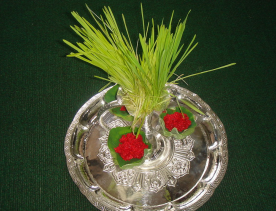 Vijaydashmi, or Dusshera is the 10th and the last day of Durga Puja; this year it’s October 15. All over Nepal and India Hindus celebrate this auspicious day in many different ways. In some parts, it’s the day Goddess Durga killed the demon Mahishasur.

After nine days of Navratri, the festival culminates with the immersion of the idol of Durga. This was also the day Rama killed Ravana, the 10-headed demon.

On the tenth and the main day of Dashain, people from the Hindu community receive tika (a mixture of red vermilion, yoghurt and rice) and jamara (germinated seeds of barley, wheat, corn and rice) accompanied by blessings from their elders.

People can receive and offer tika from the day of Vijaya Dashami to Kojagrat Purnima, the most auspicious time for receiving and offering tika this year has been fixed at 10:02 am on Vijaya Dashami day, according to Nepal Panchanga Nirnayak Samiti (NPNS).

People from the Newar community celebrate Mohni Tika, on this day.

A tika 'Mohni Sinha' (a black tika), accompanied with the red tika along with jamara and kokha (white and red shreds/pieces of cotton), are also offered and received on the day referred to as Chalan.

Main celebrations of the festival last for four days from the 8th to the 11th days of the bright half of Kaula which ithe twelfth month in the Nepal Sambar calendar.

The Marwari community perform Durga Puja during Dashain and worship Durga as the goddess of Shakti or energy. They celebrate the festival by worshipping, eating delicious meals, being dressed in new and cultural attires, and rejoicing in the company of family and friends.

Navaratri or Nawaratha is also celebrated at many parts of the country, especially the Terai plains

The festival of nine nights, Navratri, culminates with Vijaya Dasham also known as Dussehra in India. The day is celebrated with much enthusiasm across the country.

This day marks the victory of good over evil. This year, it will be observed on October 15. According to the Hindu calendar, the Navratri usually falls in the month of Ashvin, or Ashvina.

But have you ever wondered why Dussehra falls on the 10th day of the month Ashvin? According to Ramayana, it was on this day that Lord Ram defeated Ravan, the king of Lanka. Ravan is also known as Dashmukha, means 10 heads. As per belief, each head highlights a distinct quality and they are - Mada (Pride), Ghrina (Hate), Kama (Lust), Bhaye (Fear), Moha (Attachment), Krodha (Anger), Ahankar (Ego), Lobha (Greed), Jaddata (Insensibility) and Irshya (Envy). It is believed that the word Dussehra is derived from two Sanskrit words. “Dasha” means ten, which in a way represents Ravan. “Hara” means defeat.

Also, on this day, Goddess Durga killed demon king Mahishasura. Durga Puja celebrations are a reminder of the Goddess's victory over evil.

The reason these festivals come in succession is that, according to Hindu mythology, it's believed that Lord Ram worshipped Goddess Durga, on the advice of Lord Vishnu, before embarking on his journey to defeat Ravana.

In the run-up to the Vijay Dashami celebrations, several chapters of the Ramayana are enacted by actors. On Dussehra, the effigies of Ravan, Kumbhkarn and Meghnad are burnt.

In Bengal and other parts of the country, Goddess Durga's idol is immersed in water on the 10th day and people wish each other Shubho Bijoya.

This year, the auspicious occasion of Navratri began on October 7

It is often reported that the story of Rama’s victory over Ravana can be traced as far back as 5114 BC. This famous Hindu celebration says that the eighth incarnation of Lord Vishnu, Lord Rama, killed the ten-headed devil Ravana. Lord Rama, along with his brother Larkshman and follower Hanuman, trekked to Ravana’s kingdom to fight him and bring back Sita, Rama’s wife. On their way Rama prayed to Durga and was eventually victorious.

It was from around 1500BC that the first Durga Puja celebrations are mentioned, with these in Dinajpur and Malda. These celebrations often draw upon Goddess Durga’s assassination of the demon Mahidhasur.

Two Shilas Left For Ayodhya From Janakpurdham By Agencies 2 days, 14 hours ago