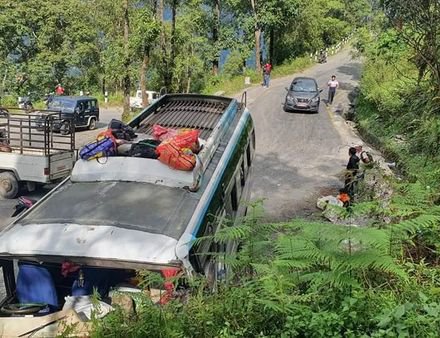 According to the Police, the health condition of two out of thirty five passengers is critical.

The bus with registration number Ba 2 Kha 3264 was en route to Kathmandu from Liksankhu.

According to police, the bus met with an accident on Sunday at Jiri-Lamosanhu highway.

"At least 35 passengers were on board and two have been severely injured," said police, adding that the passengers were under treatment at Sindhubahar Hospital in Khadichaur and two critical injured were admitted to Dhulikhel Hospital.

The bus, which had fallen 150 metres down from the highway, fell due to break-fail. The police informed that further investigation as to the accident is taking place.