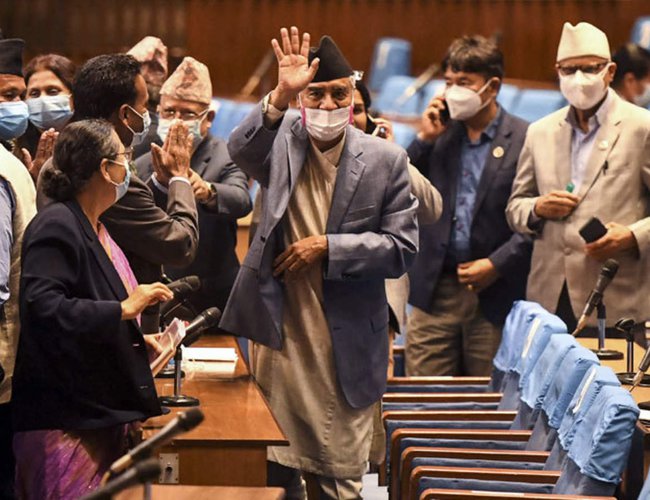 As today marks the completion of 100 days by the present government led by Nepali Congress President Sher Bahadur Deuba, there is a mixed reactions on its performance in the last 100 days.

CPN-UML leader Sher Bahadur Tamang saidt that the government is completely failed in every sector and the government has not taken any decision to remember as worthy. As we have been saying from the beginning that this government is an alliance of opportunists.

However, the ruling party leaders defended the government’s performance as a successful. CPN-Maoist Center leader Dinanath Sharma said that there is nothing to discourage. “There is ray of hope to safeguard the constitution and democratic value under this government,” said Sharma.

Nepali Congress leader Chandra Bhandari defended the government’s performance of the last hundred days. He said that the main achievement of this government is to restore faith on the constitution and democracy. “ The government has also brought the foreign policy right on the track,” said Bhandari.

He said that the government is also able provide COVID-19 vaccine to the large number of people in the country. Among those noticeable actions of the government during this period is its response to the COVID-19 pandemic. The short term target of the COVID-19 inoculation campaign has already been met. The government had set a goal of vaccinating one-third of the target group (21,756,763 populations above 18 years) by the end of mid-October and the target is already met.

It was on July 13 that NC President Deuba took charge as the head of the government. He had replaced CPN (UML) Chairman KP Sharma Oli following the Supreme Court’s order to appoint him as the Prime Minister of Nepal in accordance with Article 76 (5) of the Constitution.

It has been largely realised that the incumbent government has centred its focus on public health issues and has created a foundation for development efforts, and for the promotion of peace and good governance.

Prime Minister Deuba had pledged to implement the vaccination drive against COV ID-19 with top priority shortly after he won the vote of confidence in the House of Representatives.

It seems that the pandemic is in the phase of containment. The ability to administer 300 thousand doses of vaccine is itself an indicator to prove the government’s priority to public health.

The government has announced that it is committed to bringing all the eligible population to the vaccination coverage by mid-April. It has also pledged to provide vaccines to people below 18 soon.

Professor Dr. Surendra KC has said that political leaders are unable to maintain the political code of conduct.

In a short span of time, the government has been successful in executing vaccine diplomacy and managing 15 million doses of vaccines for its people. Implementation of the balanced foreign policy, creation of investment-friendly atmosphere, encouragement to the private sector to achieve economic stability, announcement of relief packages to the business community hit by COVID-19 pandemic, well response to COVID-19 and its management is among those noticeable actions of the government.

All local levels have been connected with internet network, an arrangement has been made to check one's tax details and pay tax electronically, digital archiving of government documents has been started and a process of digital learning for quality education in remote areas has been initiated in a short period of formation of the government.

An initiative to provide risk allowance immediately to health workers deputed in the frontline during coronavirus pandemic could also be taken positively.

The government through common minimum programme has already unveiled a special package for the revival of the economy affected by a coronavirus.

LOCAL POLLS: Independent Test By A Correspondent 3 weeks, 2 days ago