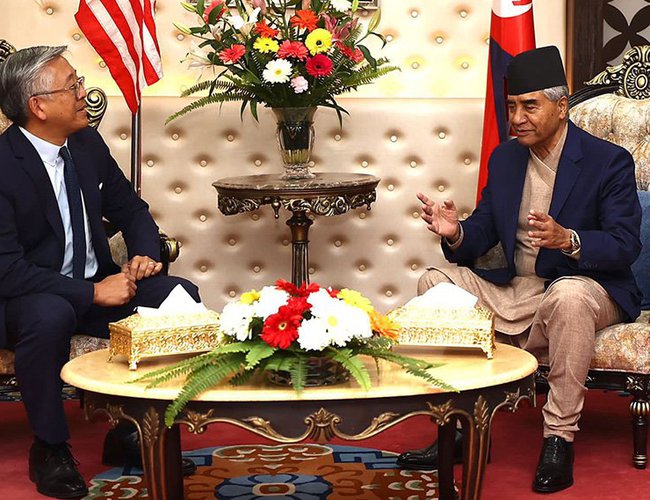 The visiting Assistant Secretary for South and Central Asian Affairs of the United States Department of State Ambassador Donald Lu paid a courtesy call on the Prime Minister Deuba this evening.

Various matters concerning Nepal-US relations, cooperation in the context of COVID-19 pandemic, post-pandemic recovery and other matters of common interests featured during the call on. The conversation also covered various areas of Nepal’s development priorities as well as the United States’ cooperation, including the MCC. Both sides expressed satisfaction on the overall state of Nepal-US relations.

Discussions were also held about the recently concluded COP26 as well as the adverse impact of climate change on the economy of Nepal. Assistant Secretary of State Ambassador Lu conveyed the US Government's planned support in the areas of adaptation and mitigation through climate finance and technology transfer.

Prime Minister highlighted Nepal’s democratic credentials and the commitment to human rights and the rule of law. The Assistant Secretary of State appreciated the progress made by Nepal in consolidating democracy and thanked the Prime Minister for confirming participation in the forthcoming Summit for Democracy to be convened by the President of the United States.

"Asst. Secretary Lu & DAS Keiderling reiterated the United States' commitment to continuing its support & partnership w/ Nepal in the areas of mutual interest like COVID-19 and climate change, & others," US ambassador Berry tweeted after the meeting.

Germany Decides To Continue With The Bilateral Development Cooperation With Nepal Beyond 2023 By NEW SPOTLIGHT ONLINE 2 days, 2 hours ago

Nepal Backs Away From US State Partnership Program: Indian Scholar, China Commends Nepal's Decision Not To Move Ahead On The SPP: CGTN By NEW SPOTLIGHT ONLINE 4 days, 1 hour ago