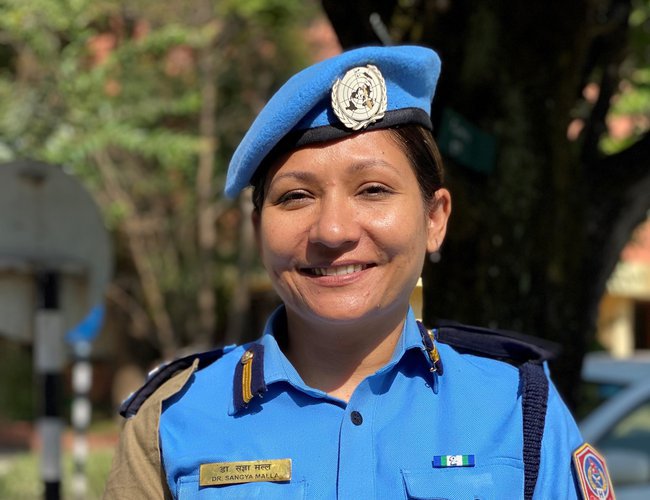 Superintendent Malla currently serves as the Chief of the MONUSCO Police Health and Environment Unit, which she helped establish in the country’s capital, Kinshasa. The unit is responsible for implementing policies and procedures concerning the health and well-being of personnel as well as United Nations Police environmental initiatives. Her contributions have added direct significance in the Democratic Republic of Congo in light of the ongoing COVID-19 pandemic and past outbreaks of Ebola virus disease, as well as natural and humanitarian crises such as the volcanic eruption in Goma last May, during which her unit alerted the local population and UN staff of precautionary measures.

“She helped establish and now leads MONUSCO’s Health and Environment Unit, enhancing the safety and welfare of our peacekeepers by mitigating the risks from COVID-19 and other threats,” said United Nations Secretary-General António Guterres. “And she represents something far larger — the many contributions of women police officers in advancing peace and security around the world. Through her work, Superintendent Malla embodies the best of the United Nations.”

A medical professional by training, Superintendent Malla helped develop guidance for preventing and mitigating the spread of COVID-19. She has organized over 300 awareness sessions this year on COVID-19 prevention as well as environmental protection for the local population, Congolese authorities and UN staff. As the MONUSCO Police’s focal point on COVID-19, she has also been disseminating information about the vaccines and promoting vaccination efforts.

“I am honored to receive this award, and I hope it will encourage more young women in my country and around the world to pursue careers in policing, which is still too often viewed as man’s work,” said Superintendent Malla.

The United Nations Woman Police Officer of the Year award was established in 2011 to recognize the exceptional contributions of women police officers to UN peace operations and to promote the empowerment of women.

“Like many peacekeepers during this challenging time amid the pandemic, Superintendent Malla has gone above and beyond the call of duty to serve local communities,” said United Nations Police Adviser Luis Carrilho. “Together with her team, her efforts to raise awareness about public health and natural risks have ultimately made her colleagues and the Congolese people safer—a core function of policing.”

Superintendent Malla previously served with the United Nations Stabilization Mission in Haiti (MINUSTAH) from 2016 to 2017, where she was a member of the Formed Police Unit’s medical team. She joined the Nepal Police in 2008 as an inspector.

The award was to be presented during the 16th United Nations Police Week from 8 to 12 November. At this annual event, heads of UN Police components and police experts from peacekeeping operations, special political missions and regional offices and United Nations senior leadership discuss performance, conduct and discipline, protection of civilians, conflict prevention, sustaining peace and other topics and priorities affecting United Nations policing.

About 7,300 UN police, almost 27% of whom are women, are currently deployed in 14 United Nations peace operations around the world where they work to enhance international peace and security by supporting host countries in conflict, post-conflict and other crisis situations.

UNPOL has already achieved the 2025 targets set out in the Department’s Uniformed Gender Parity Strategy for all categories of personnel. Women police officers comprise 30% of individual police officers and 15% of members of Formed Police Units. Women police hold 40% of professional posts at UN Headquarters and 33% in the field. Women also lead half of UN Police components in UN peace operations.

Germany Decides To Continue With The Bilateral Development Cooperation With Nepal Beyond 2023 By NEW SPOTLIGHT ONLINE 6 hours, 41 minutes ago