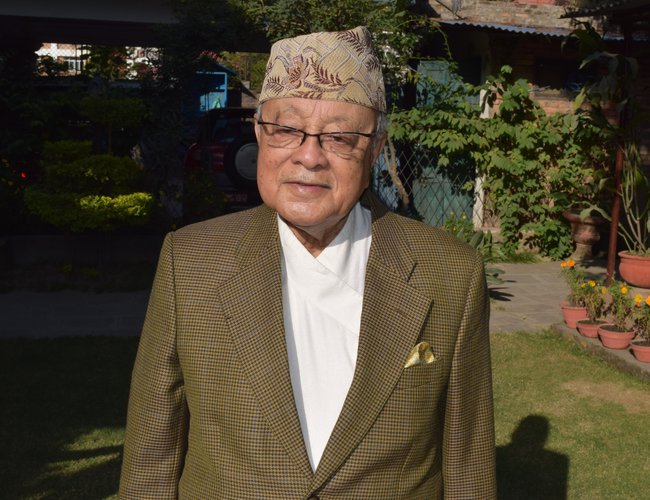 Hiamalaya Sumsher Rana, the first governor of Nepal Rastra Bank and first finance secretary, is a well known figure in Nepal and abroad. However, Rana has a long legacy and family contribution in strengthening Nepal’s relations with Japan.

For his contribution in strengthening Nepal-Japan relations, the Government of Japan honored Himalaya Shumsher Jung Bahadur Rana with 2021 Autumn Conferment of Japanese Decorations on Foreign Nationals.

Given his and families contributions, Rana is most deserving of persons for the medal. The Government of Japan has recognized the contributions given to strengthen Japan-Nepal relations.

The Government of Japan announced the foreign recipients of the 2021 Autumn Imperial Decorations naming Himalaya Shumsher Jung Bahadur Rana as one of the recipients.

Founding Governor of Nepal Rastra Bank (Central Bank) and Former Finance Secretary Rana was awarded the Order of Japan (The Order of the Rising Sun, Gold and Silver Star) among foreign nationals among this year’s 2021 Imperial Decorations conferred by the Government of Japan.

Rana was recognized for his efforts to initiate economic ties between Japan and Nepal after he had visited Japan and witnessed Japan’s rapid economic recovery form World War II devastation.

He had also successfully persuaded the board of NRB to open the bank account at the Bank of Japan (BOJ) in 1960s, believing that could lead to the activation of economic relations between the two countries. The NRB was the first foreign central bank that had opened an account at the BOJ.

Rana’s great grandfather Dev Shumsher Jung Bahadur Rana, the Prime Minister of Nepal in 1901 had decided to send the first Nepali students to study in Japan. People to people contacts between Japan and Nepal began with the visit of Japanese monk Kawaguchi Ekai to Nepal in 1899 and with the travel of eight Nepali students to Japan in 1902.

Rana tried to make this fact known to Nepali people at every opportunity, including at the symposium on the centennial celebrations of Nepali students in Japan in 2002, and he had delivered a lecture on the same theme at the annual meeting of the Japan University Alumni Association of Nepal (JUAAN).

The Embassy congratulates Rana on being conferred with the Order of Japan. Next year will be the Japan Southwest Asia Exchange year and marks 120 years after the first batch of eight Nepali students had travelled to Japan in 1902. Japanese decorations are conferred upon foreigners twice a year, on 29th April and 3rd November, concurrently with the conferment of decorations and medals on Japanese nationals.

Isolated from the rest of the world except England, Europe and China, late Dev Sumsher Rana opened for an alternative development pattern for Nepal.

Born on January 8, 1928, well respected Rana laid the foundations of Nepal’s institutions, including Nepal’s Central Bank and Ministry of Finance. He is the only living memory of Nepal’s political, social and economic transformations.

As Himalayan Sumsher Rana’s great-great grandfather opened door to Japan sending Nepalese students, he himself recognized the importance of Japan’s growing global role making Japanese Yen as other reserve foreign currency during his tenure as governor of Nepal Rastra Bank.

16 Day Of Activism Against Gender Based Violence By NEW SPOTLIGHT ONLINE 21 hours, 25 minutes ago