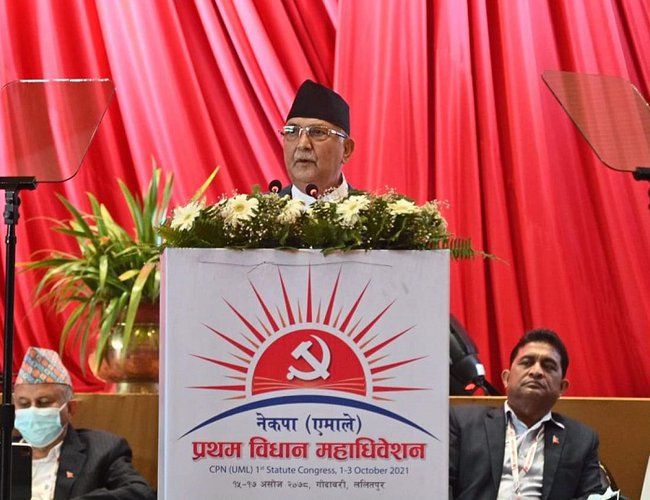 Although Nepali Congress and Maoist Center are also holding their general conventions this month, any change in the leadership of these two parties is unlikely.

Despite efforts of his rivals to weaken him, Prime Minister Sher Bahadur Deuba is in a comfortable position in the general convention. Even if all is detractors join, Deuba’s rival does not have his mass appeal. Similarly, Maoist Center leader Pushpa Kamal Dahal has no challenger either right now to dislodge him.

Two major political parties which have completed their general conventions have shown two different trends. During the CPN-UML convention several efforts were made to dislodge the current leadership. However, party workers gave overwhelming support to KP Sharma Oli rejecting the call of Bhim Rawal for the replacement of leadership.

CPN-UML cadres’ hope with former PM Oli is understandable as there are no other leaders in the party to have a greater appeal among the voters to match leader Oli. Since the party is just recently split with another leader Madhav Kumar Nepal leading the breakaway party, Oli’s leadership was a pre-requisite for UML cadres,

Although Bhim Rawal has a strong personality and capacity to lead the party, what he lacks is mass appeal and credibility among the leadership. This is the reason party’s cadres backed Oli to lead the party.

Actively involved in the party for over five decades, Oli needs no introduction in the mass as well. His language skill and speech in tune with the rural people is his asset. In the last two decades, Oli has played a crucial role to bring CPN-UML in back in track twice in the past. Split virtually in 1996 on the issue of Mahakali Integrated Treaty, CPN-UML returned to the politics in the elections of 1999 with second position.

During the elections of Constituent Assembly in 2008, CPN-UML was virtually wiped out, winning only 34 seats in 330 constituencies. However, UML revived again under Oli’s leadership.

Oli, a shrewd political player, was able to bring back formidable position in the 2018 national elections giving shock to Nepali Congress. Following the split with Maoist Center and within, CPN-UML is once again facing a critical time for its future and Oli is in the leadership.

As the elections for local, provincial and national levels are just around in a year, CPN-UML’s followers have a very little option to choose other leaders to replace fire brand Oli.

“I will take rest only after strengthening our party base. If we stand together, CPN-UML will come back to power with majority,” said Oli taking oath as a party president. “Holding convention successfully and in a democratic manner, we have proved that CPN-UML is a democratic party.”

However, Oli’s critics see the recent convention differently. They hold the view that CPN-UML chair Oli manipulated the elections allowing only those who favor him.

“Although party leadership has made every effort to bar us from contesting the elections, we were able to force the party to follow the internal democratic process,” said Ghanshyam Bhusal, who lost the elections in the party.

As his nature, Oli successfully incorporated his like men in various positions even accommodating new comers from Maoist party in comfortable and respectable positions.

He backs his critics like Yogesh Bhattarai, Gokarna Bista and Astalaxmi Shakya and other leaders. However, he sidelined those who tried to challenge his leadership even returning to party.

Whether one likes it or not, Oli has proven himself as the unchallenged leader in the party. Given the current situation, only his single leadership can give a fresh energy to revive the party.