PRATIMA RANA PANDE Honored For Cause

For her dedication, commitment and hard work, Pratima Rana Pande received an honor from Italy, the highest media Order of the Star of Italy 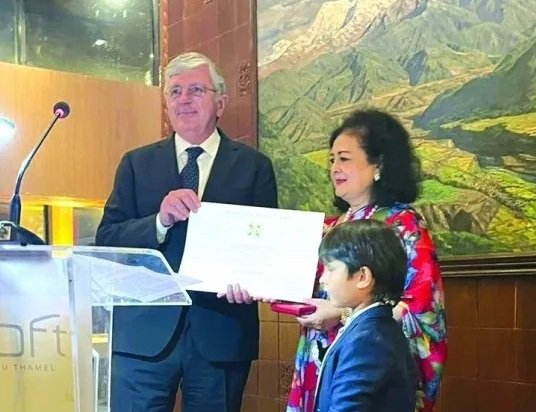 When there was a lockdown with large numbers of Italian citizens stranded in Nepal, it was a very difficult to operate the repartition flights. However, Pratima Pande made it possible by making the repatriation flights happen.

Visiting from office to office in the lockdown, Pande was able to send over 300 Italian and Europeans stranded in Nepal. Similarly, Pande, a devoted lover of heritage, art and culture, has also been providing much needed assistance to Italians in Nepal and providing information to Nepalis regarding the business opportunities in Italy.

Apart from this, Pande has also been organizing various programs to promote and strengthen the people to people relations through musical concerts, cultural and food programs. 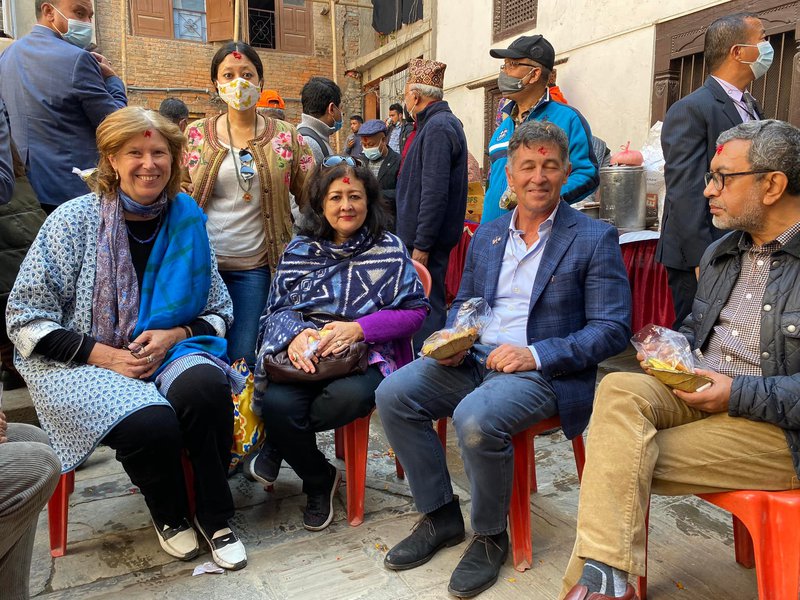 Whether it was the time of major global crisis to evacuate the stranded Italian citizens from Nepal or organizing cultural and musical concert to promote people to people ties between Italy and Nepal, prominent heritage lover and preserver Pratima Pande has always been in the forefront as honorary consulate of Italy to Nepal.

Having worked in the most difficult time to evacuate Italian Citizens from Nepal and working to strengthen Nepal-Italy relations and providing all kinds of support to Italian citizens and business groups in Nepal, Pande, wife of chairman of Nepal Investment Bank Prithvi Bahadur Pande, has been working with complete dedication of her time to fulfill her responsibility.

Recognizing her contributions and dedication, the government of Italy has honored Pratima Rana Pande with Order of the Star of Italy.

Italian Ambassador Vincenzo de Luca conferred the honor on Pratima Rana Pande, the Honorary Consul General of Italy for Nepal, amidst an event held in the Capital on October 22.

The Order of the Star of Italy is a distinction that qualifies as a second civilian honor of the State. It represents a particular honor on behalf of all those, Italians abroad or foreigners, who have acquired special merit in the promotion of friendly relations and cooperation between Italy and other countries and the promotion of ties with Italy.

In an earlier interview with an English daily, ambassador de Luca had expressed his happiness to honor Pande.

"We have a very important asset here. It is our Honorary Consul General of Italy Pratima Rana Pande. I am honored and happy today to deliver the honor of Cavaliere dell'Ordine della Stella d'Italia (the Knight of the Order of the Star of Italy) recognized by the President of the Italian Republic Sergio Mattarella (to Pratima Rana Pande)," he had said. 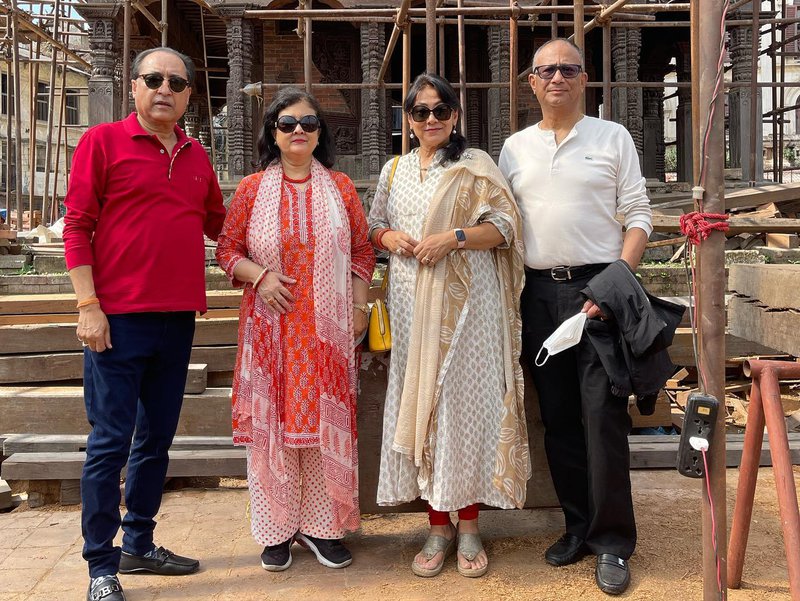 The recent honor to Pande, who has a high reputation for working in the country for preservation and conservation of Nepalese heritage and culture, for her dedication and commitment. 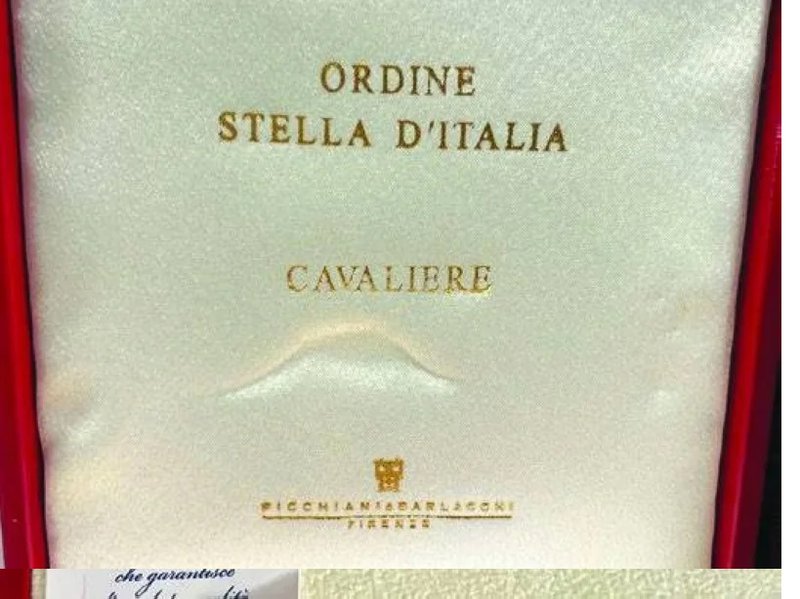 Italy And Nepal: Ties Going To Over Sixty-two Years

Italy and Nepal have a relationship which dates back to over sixty-two years. The Italian Embassy was very much in Nepal till 1990, and now the Italian Embassy in Delhi and Consul General in Kolkata help and guide us here.

An Honorary Consul has many responsibilities and our work at the Consulate Office entails promoting Nepal-Italy relations, working with the Ministry of Foreign Affairs, Nepal by seeking their advice, and aiding and solving many issues for Italian and Nepali citizens with the help of my Senior Officer Sabina Shrestha, who is traveling and therefore not here this evening. We miss her very much tonight. I would like to thank Fabrizia who is helping me out in the consulate in her place.

There is a strong Italian community of expats residing and working here, and many Nepali students apply to study different subjects such as Engineering, Sciences and Computer Software Studies etc. in Italy’s top universities.

Italy is the country where the Renaissance took place in the great city of Florence, Firenze. The whole of Europe and the world at large have been influenced in the arts, sciences, architecture, and culture coming out of this rich heritage. Italian cuisine, of course is perhaps Italy’s most famous export, and is very much loved by people around the world, and most definitely here in Nepal, as you can see from the great success of Fire and Ice pizzeria, which is an institution in itself.

Many of you gathered here today have visited the great cities of Rome, Milan, Florence, Naples, and Venice, and countless other beautiful and charming places throughout Italy.

In October 2017, the Nepali, Italian, and Expat community were treated to an exceptional concert by “The Quartetto di Cremona” - four musicians who played the cello and violins, delivering an evening of outstanding western classical music at the Hyatt Hotel. To celebrate the 60th Anniversary of the bilateral relations between Nepal and Italy in May 2019, we were honored and privileged to listen to a violin concert by the renowned Italian musician, Maestro Domenico Nordio, at the Yak & Yeti Hotel. It was a magical evening.

Both concerts were sponsored with the generosity of the Italian Government, the Italian Cultural Centre New Delhi, and the Consulate General of Italy in Kolkata and with local support from Nepal Investment Bank limited.

After Covid, we look forward to more cultural exchanges with Italy. The pandemic has brought our world to a standstill, but now with vaccinations and social distancing norms and measures, life has to go on, otherwise we will lose our sanity. Trade, Commerce, Tourism all has been slowly revived across the globe, and we all hope that normal life can resume, with all the pleasures of travel and cultural exchange. 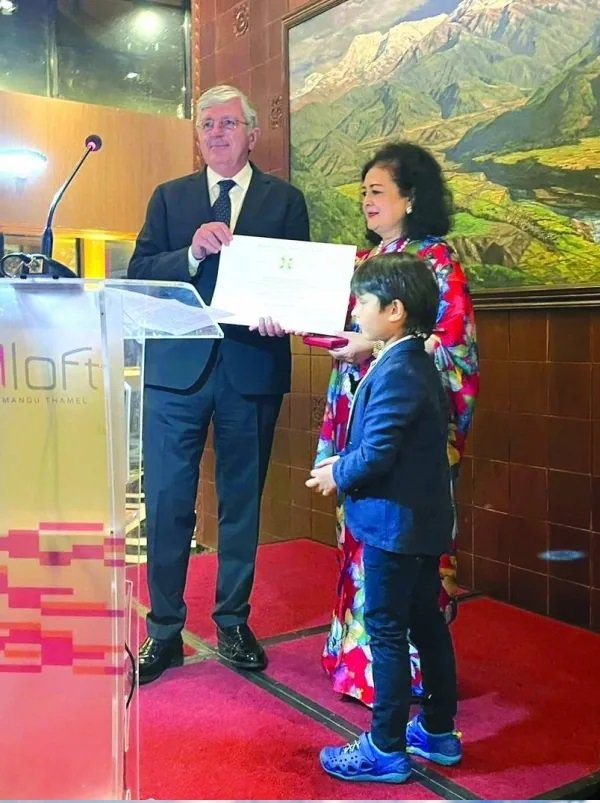 Before I conclude, during the first lockdown in April 2020, when Italian citizens and tourists around the world were stranded, Italy sent a Boeing Dreamliner 787 to Nepal to help evacuate Italian and European citizens with the help of the Ministry of Foreign Affairs, Civil Aviation, the Italian Embassy in Delhi, and the Consul General of Kolkata. It was a difficult and challenging task, but satisfying when the passengers finally flew away on Neos Air to Milano. I must thank the Consul General of Kolkata, Alfonso Tagliaferri who played a vital role in making this happen. Rescuing the tourists of Italian nationality and others involved surmounting some challenging hurdles, but all of us Honorary Consuls worked very hard for the repatriation, and it was immensely satisfying to see everyone return safely home.

During the second lockdown, the hospitals were inundated with Covid victims, and Italy was very generous after an appeal for help from our Consulate, and the government of Nepal, and sent the Nepali people very valuable and much needed medical supplies which consisted of 20 ventilators, 6000 isolation gowns, and 10,000 protective overalls.

I would also like to thank H.E. Ms. Nona Deprez, the EU Ambassador who did such a marvelous work in coordinating the relief efforts at the airport of Italy and the other EU countries. It was a pleasure to work with you dear Nona. Thank you very much!

I would also like to express my sincere respect and gratitude to the Honorary Consul General of Italy to Kolkata Mr. Damiano Francovigh and Ms. Vincenza Bufalo who Sabina Shrestha and I worked with from 2015 to 2019. We had a very good working relationship, and we learnt a lot from them. Thank you for your goodwill and friendship.

I would also like to thank Pietro Sferra Carini, the Deputy Chief of Mission in New Delhi for helping us in difficult times. He was always so patient, understanding, and gentle during his trips to Kathmandu.

Finally, I would like to thank all of you for gracing this evening and once again, welcome, and congratulations to your Excellency Vincenzo de Luca.We look forward to your future visits with great anticipation. Gianluca Rubagotti, Marcella, and Alessandro we are so happy that all of you are here too, and look forward to seeing you often!

World AIDS Day 2022: The AIDS Response Is In Danger By NEW SPOTLIGHT ONLINE 2 days, 10 hours ago