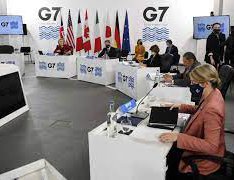 The foreign affairs chiefs from the Group of Seven nations have expressed their "concern" about what they call China's "coercive economic policies."

This is an apparent bid to counter China's increasing influence through trade policies and large loans to developing nations.

The UK government, which hosted the G7 foreign ministerial meeting in Liverpool, issued the chair's statement after the two-day gathering ended on Sunday.

On China, the statement also says the participants "discussed a range of issues and challenges, such as the situations in Hong Kong and Xinjiang, in the East and South China Seas and the importance of peace and stability across the Taiwan Strait."

For the first time, the G7 ministers invited their counterparts from the Association of Southeast Asian Nations to join them and ministers from Australia and South Korea for discussions on the Indo-Pacific region.

The statement says the participants "discussed the importance of maintaining a free and open Indo-Pacific, which is inclusive and based on the rule of law." It says they also reaffirmed their "strong engagement and co-operation in the region."

The statement says the G7 ministers renewed their call for North Korea "to refrain from provocative actions."

The statement calls on Pyongyang to engage diplomatically with "the explicit goal of complete, verifiable and irreversible abandonment" of all its unlawful weapons of mass destruction and ballistic missile programs in accordance with UN Security Council resolutions.

The statement also urges North Korea to "immediately" resolve the issue of citizens abducted by its agents.

Apart from the chair's statement, the G7 foreign ministers released a joint statement on heightened military tensions along the border between Russia and Ukraine, where Moscow has amassed a large number of troops.

The statement says the ministers are "united" in their "condemnation of Russia's military build-up and aggressive rhetoric towards Ukraine."

It says the ministers "call on Russia to de-escalate, pursue diplomatic channels, and abide by its international commitments on transparency of military activities." The statement adds that "Russia should be in no doubt that further military aggression against Ukraine would have massive consequences and severe cost in response."

Russia Military Advances To Control Another City In The Eastern Ukraine By Agencies 13 hours, 3 minutes ago