Omicron Has Changed The Shape Of The Pandemic. Will it end it for good?

Omicron's reduced severity compared to previous variants, and the perceived likelihood that individuals will eventually be infected, have contributed to that relaxation in people's mindsets, Williams said 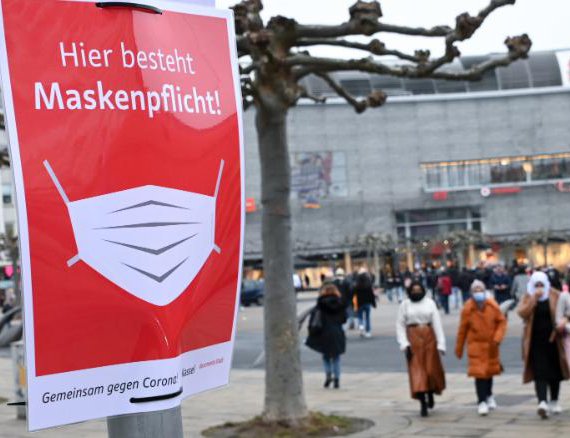 By Rob Picheta, (CNN)The world feared the worst when a worrying new coronavirus variant emerged in late November and ripped through South Africa at a pace not seen before in the pandemic.

But two months later, with Omicron dominant across much of the globe, the narrative has shifted for some.

"Levels of concern about Omicron tend to be lower than with previous variants," Simon Williams, a researcher in public attitudes and behaviors towards Covid-19 at Swansea University, told CNN. For many, "the 'fear factor of Covid' is lower," he said.

5-year-old does all this after school to protect her siblings from Covid-19 04:27

Omicron's reduced severity compared to previous variants, and the perceived likelihood that individuals will eventually be infected, have contributed to that relaxation in people's mindsets, Williams said. This has even caused some people to actively seek out the illness to "get it over with" -- a practice experts have strongly warned against.

But some within the scientific community are cautiously optimistic that Omicron could be the pandemic's last act -- providing huge swathes of the world with "a layer of immunity," and moving us closer to an endemic stage when Covid-19 is comparable to seasonal illnesses like the cold or flu.

"My own view is that it's becoming endemic, and it will continue to stay endemic for some time -- as has happened with other coronaviruses," said David Heymann, professor of infectious disease epidemiology at the London School of Hygiene and Tropical Medicine.

"All viruses try to become endemic, and to me this one looks like it's succeeding," he said.

Covid-19 has evolved with great unpredictability, and the variant that superseded Delta could have been more sinister, experts say; but the world ultimately got a dominant strain that is sweeping through populations with ease, without causing the same degree of hospitalizations, severe illnesses and deaths that previous variants have done.

Experts caution that there may be setbacks along the way -- just as Omicron's make-up was unexpected, the next variant could present a more serious public health risk and delay the end of the pandemic.

And many countries, particularly where vaccination coverage is low, could still face overwhelmed hospitals due to the current Omicron wave.

But a political urgency is appearing in much of the West to return societies to a sense of normality -- with the transmissibility of Omicron forcing leaders to choose between rolling back public health measures or seeing their workforces and economies risk grinding to a standstill.

And for the first time since the spread of Covid-19 stunned the world in early 2020, some epidemiologists and leaders are willing to entertain the prospect that the virus might be making steps toward endemic status.

'The rules of the game have changed'

The question that scientists and wider society will grapple with throughout 2022 is when Covid-19 will leave its current stage and enter endemicity.

A disease that is endemic has a constant presence in a population but does not affect an alarmingly large number of people or disrupt society, as typically seen in a pandemic.

Experts don't expect Covid to fully disappear in any of our lifetimes. Instead, it will eventually reach a period similar to several other illnesses, where "most people will be infected as children, possibly multiple times, and as those infections accumulate, they build up an immunity," according to Mark Woolhouse, professor of infectious disease epidemiology at the University of Edinburgh and the author of a book about the early stages of the pandemic.

"That's the situation we're heading towards," he said. "Omicron is another dose of virus. We will all be on average less susceptible to disease having had that dose, or having had the vaccine."

That's why Omicron's reduced severity is so key -- it adds an extra layer of immunity, but doesn't come with the same risk of hospitalization that Covid-19 held for most of last year. Omicron is associated with a two-thirds reduction in the risk of hospitalization compared to Delta, according to a Scottish study. A separate paper from South Africa put the same figure at 80%.

"Well over half the world has now got some exposure to the virus or the vaccine. The rules of the game have changed from the virus's point of view," Woolhouse said.

And underlining experts' confidence is history -- though comparing the current scenario to previous pandemics is not an exact science, there is evidence from the past that viruses can be expected to evolve into less severe versions and eventually disappear into the arsenal of annual colds and influenzas.

"There are four other coronaviruses that have become endemic," Heymann said. "The natural history of infections" indicates that Covid-19 will be the fifth, he added.

"People have reinterpreted 'Russian flu' in the late 19th century as the emergence of a common cold-type coronavirus," added Woolhouse, referring to the 1889-90 outbreak that is estimated to have killed around a million people, but which ultimately became a common cold.

"The 'Spanish Flu' basically gave the whole world a very nasty dose of an H1N1 influenza virus" in 1918, he said. Now, "we get a wave of that virus pretty much every year."

Experts generally agree that Omicron moves us closer to that stage with Covid-19. But there is a big caveat that determines how fast we'll get there -- and it depends not on the current strain, but the one that comes next.

"It is an open question as to whether or not Omicron is going to be the live virus vaccination that everyone is hoping for, because you have such a great deal of variability with new variants emerging," Dr. Anthony Fauci, director of the National Institute of Allergy and Infectious Diseases, said Monday.

"I would hope that that's the case," Fauci told the Davos Agenda, a virtual event this week held by the World Economic Forum, mirroring the cautious optimism that many epidemiologists are expressing. He added that the world was "fortunate" that Omicron didn't share more of Delta's characteristics.

But for all the positive indications, it "doesn't mean a new variant won't come up and force us backwards," Woolhouse said.

"I would not like to call which way the next (variant) would go, he added. "The next variant has to outcompete Omicron, and the main thing it will have to be able to do is evade natural immunity, and to evade vaccine-induced immunity," he said. "What we can't say in advance is how bad (it) will be."

An arms race towards endemicity

Epidemiologically speaking, Omicron has delivered some cause for optimism -- but much depends on how the virus evolves from here.

Pandemics do not move merely with the whims of a virus, however; they are also directed by human behavior and political acts. And as the pandemic's two-year anniversary in March edges closer, signs are emerging of an arms race towards endemicity.

Spain's Prime Minister Pedro Sanchez, who presided over one of the West's most effective vaccination rollouts, told radio station Cadena Ser earlier this month that it's time "to evaluate the evolution of Covid from pandemic to an endemic illness." His health minister said she has put that viewpoint to fellow European Union leaders.

Britain's education secretary Nadhim Zahawi, who previously oversaw the UK's vaccine rollout, added to Sky News that he wanted the UK to "demonstrate to the world how you transition from pandemic to endemic."

And that move is already well underway in countries such as Denmark, where Covid rules were ditched and then re-introduced last year. Tyra Grove Krause, an official at the Statens Serum Institut (SSI) that deals with infectious diseases in the country, told local network TV2 this month that Omicron could "lift us" out of the pandemic and return Danes to normalcy within two months.

"Those governments that have achieved a high degree of population immunity through the privilege of vaccination or the burden of infection now have a wider range of choices than they did at the start of 2021," said Thomas Hale, associate professor at Oxford University's Blavatnik School of Government, and the academic lead of its Covid-19 Government Response Tracker.

Many countries are starting to act as if Covid is already endemic. England resisted new restrictions despite record-breaking infection figures in recent weeks, and though hospitalizations and deaths have risen, its health care sector appears to have survived the peak of the Omicron wave without recording the high admissions seen during previous variants.

Early real-world examples like this could give other nations the confidence to strip back restrictions and, as British Prime Minister Boris Johnson proposed this month, "ride out" the Omicron wave. "Many countries have looked to the UK, because they see that the UK has some degree of permissibility" in restrictions, Heymann said.

That approach is quickly becoming more commonplace. Covid-related financial aid is soon set to end in France as restrictions are eased; "We are announcing [to people in France] that the pandemic will perhaps be behind us by mid-February," French Prime Minister Jean Castex announced Thursday.

Driving this push is the ravaging impact that Omicron is having on essential workforces -- a development that has changed the calculus of governments. Faced with dilemma of tackling transmission or keeping their countries running, leaders have swiftly moved to slash isolation periods.

"Clearly taking people out of the workforce -- particularly schools and healthcare -- is one costly impact," of Omicron, Hale said. "Of course it is preferable to prevent widespread transmission in the first place, though for many countries now facing Omicron this point is now moot."

That means that an increasing number of countries are looking to "transfer the risk assessment to their populations," Heymann said -- relaxing rules and encouraging self-testing, personal decisions on mask-wearing, and even individual assessments among infected people of how long they need to isolate.

Many experts still encourage restrictions to reduce transmission, at least while the Omicron wave is with us. But Williams noted that populations are increasingly moving away from that view.

When you should take a PCR vs. a rapid antigen test

"The way Omicron has been represented in some media reports, and even indirectly by some politicians -- who were a bit too quick to emphasize the 'we need to learn to live with it' message -- have contributed to this now quite widespread view that Omicron is less worrisome," he said.

The problem with that approach, many warn, is that some parts of the world are less able to take on a relaxed approach.

"By definition a pandemic is not over until it's over, for everyone, everywhere," Williams said. "Our attention now should increasingly focus on getting enough vaccines to those in low- and middle-income countries."

Vaccination coverage is lower in many poorer regions of the world -- particularly in eastern Europe, central Asia and large parts of Africa -- leaving those places especially susceptible to worrying new variants or more severe waves of hospitalizations.

"A pandemic has various components to it in various countries," Heymann said. "I think countries will become endemic at different rates."

And that adds an extra layer of uncertainty to the question of whether Omicron will hasten the end of the pandemic.

"Health systems around the world will have to be cognizant" of the risks of Covid even if it soon starts to act and feel more like a seasonal cold, Woolhouse said.

"The world has changed -- there's a new human pathogen there, and it's going to continue to cause disease for the foreseeable future," he concluded. "We were always going to be living with Covid. it was never going to go away -- we knew this from February 2020."

"What we didn't know, and still don't fully, is exactly what that looks like."