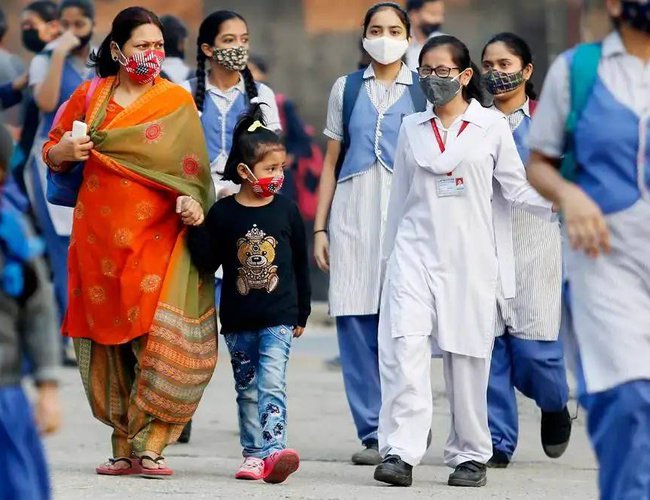 WITH ALL indicators signalling a steady return to the situation that prevailed two months ago, the Union Health Ministry on Wednesday directed states to ease, or even do away with, the additional restrictive measures that had been imposed to deal with the third wave of the pandemic.

In a letter to chief secretaries in states, Health Secretary Rajesh Bhushan said it is important that movement of people and economic activities do not remain under the same level of restrictions now.

“Presently, as the case trajectory across the nation is showing a sustained downward trend, it will be useful if states review and amend/ do away with the additional restrictions so imposed after considering the trend of new cases, active cases, and positivity,” Bhushan said in the letter.

“In earlier months, in view of the high Covid case trajectory, certain states had imposed additional restrictions at their borders and at airports. While effectively managing the public health challenge of Covid-19, it is equally important that movement of people and economic activities should not be hampered by additional restrictions imposed at State level points of entries,” he said.

The letter is a sort of official acknowledgment of the end of the third wave, which was not just vastly milder than the previous two waves, but also the least painful in terms of health conditions.

Case counts remained well below expected levels, though a much larger proportion of infections are likely to have been missed during this wave because of the rapid spread, and largely asymptomatic nature, of the infection caused by the new Omicron variant.

The Centre’s letter comes at a time when the daily case count has dropped to about 30,000, around the lowest this year. This count had peaked on January 20, when more than 3.47 lakh new infections were detected, and has been declining for over three weeks now.

The death count is still high compared to the start of the third wave, but this trend usually shows a lag of about two weeks. The daily toll outside Kerala had fallen below 50 in the last week of December — as of now, this number is about 200.

Kerala has been continuously updating its toll by adding previously uncounted deaths because of which its daily numbers have been inflated. The state has already recorded more than 62,000 Covid-related deaths, the highest for any state except Maharashtra, where the death toll exceeds 1.47 lakh.

In the letter to chief secretaries, Bhushan wrote: “I am sure that under your continued leadership, the states would continue to address the challenge of Covid-19 while minimizing its impact on the lives and livelihood of people.”

During the third wave, the states had taken control measures like night curfews, restrictions on the size of gatherings, closure of educational institutions and limitations on occupancy in restaurants and theatres. Most of these restrictions are already in the process of being lifted.

On Wednesday, the Haryana State Disaster Management Authority (HSDMA) lifted all Covid-related restrictions across the state in its revised guidelines. “However, the residents of the state are advised to strictly follow Covid appropriate behavioural norms including social distancing,” stated the order issued by chief secretary Sanjeev Kaushal.

Last week, the Centre had relaxed guidelines for international passengers arriving in India. They no longer need to quarantine themselves for seven days or get tested at the airport if they come from an at-risk country, or undertake a repeat test on Day 8 of arrival.It had, however, warned against complacency, given the unique challenges the virus can still pose, and the situation in some states and districts.