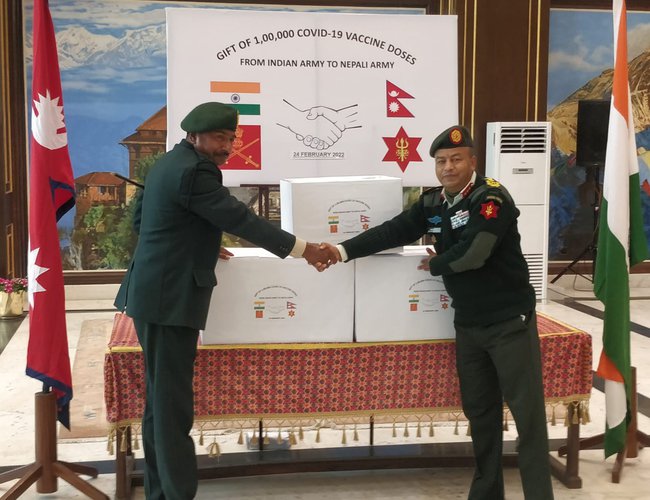 Under the Government of India’s “Vaccine Maitri’ initiative, the Indian Army gifted 1,00,000 doses of Made in India vaccines to Nepali Army in a ceremony at Nepali Army Headquarters,Tundikheltoday.

The Indian government had gifted such a quantity of vaccines to NA under a vaccine-friendly plan.

Lt. Gen. PN Ananthanarayanan, also lauded the gallantry and commitment of the Gorkha soldiers in the Indian Army and expressed his commitment to serve the Gorkha community.

The Indian Army has been assisting the Nepali Army to fight Covid-19 through various kinds of assistance since 2020 including Covishield vaccine, medical equipment, ambulances, etc. This latest gift of vaccines is another testament to the close cooperation between the two armies and the two countries, particularly in times of need.

The VCOAS Nepali Army welcomed the gift of vaccines and expressed happiness over the cooperation extended by the Indian Army.

Foreign Secretary Paudyal Thanked China For The Preparation Of The Return Of Nepali Students To China By NEW SPOTLIGHT ONLINE 2 days, 13 hours ago