All Nepalese are safe in Ukraine. NRNA reports that over 501 Nepalese have already reached safe place in different parts of Europe 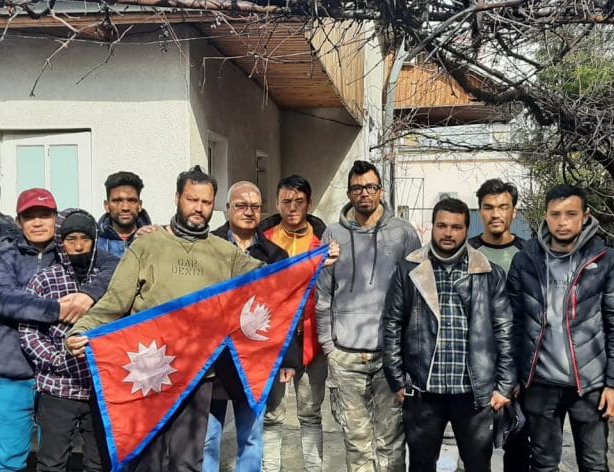 By opposing Russian intervention in Ukraine and expressing strong support to the sovereignty and integrity of Ukraine, Nepal has shown its solidarity with the small countries.

As a small country surrounded by two big powers, Nepal’s concern is natural and opposing the Russian intervention, Nepal expresses its commitment to the UN Charter and sovereignty and independence of the nations.

In its recent statement, Nepal has expressed its opposition to Russia’s military actions in Ukraine. The Ministry of Foreign Affairs (MoFA) stated that the country opposed any use of force against a sovereign country in any circumstance and made it clear that it believed in the peaceful resolution of disputes through diplomacy and dialogue.

The statement also affirmed Nepal’s commitment to the principles of sovereignty and territorial integrity as enshrined in the charter of the United Nations and noted the recognition of the breakaway Ukrainian regions of Donetsk and Luhansk as independent entities by Russia went against the UN Charter.

MoFA, on behalf of the state, also called on all parties to exercise maximum restraint and not escalate tension.

Russian President Vladimir Putin launched a multi-pronged attack on Ukraine, with explosions heard in many Ukrainian cities including the capital Kyiv and President Volodymyr Zelenskyy claiming missile strikes on Ukrainian infrastructure and border guards. The latter’s media have also reported a barrage of cyberattacks and dissemination of misinformation and falsities via social media.

However, Russian authorities have termed the action a ‘military operation’ and have claimed that it was necessary to protect the civilians of eastern Ukraine, mainly in the recently-recognized Donetsk and Luhansk.

Western powers including the United States, the United Kingdom and the European Union have used terms like “incursion,” “invasion” and “aggression” to define Russia’s actions and, along with Japan, have imposed sanctions on Russian banks and individuals.

Meanwhile, MoFA has asked all Nepali nationals to not fly to Ukraine and if already there, return as soon as possible. It has requested all citizens to contact either the Nepali Embassy in Germany which is concurrently accredited to Ukraine or the Embassy in Russia.

The embassy of Nepal in Berlin, Germany has said that all Nepalis who came into contact with the mission in the wake of the recent crisis in Ukraine are safe so far.

According to Embassy, the efforts to obtain more information about the status of Nepali people in various cities in Ukraine are ongoing and 193 people have contacted the embassy. 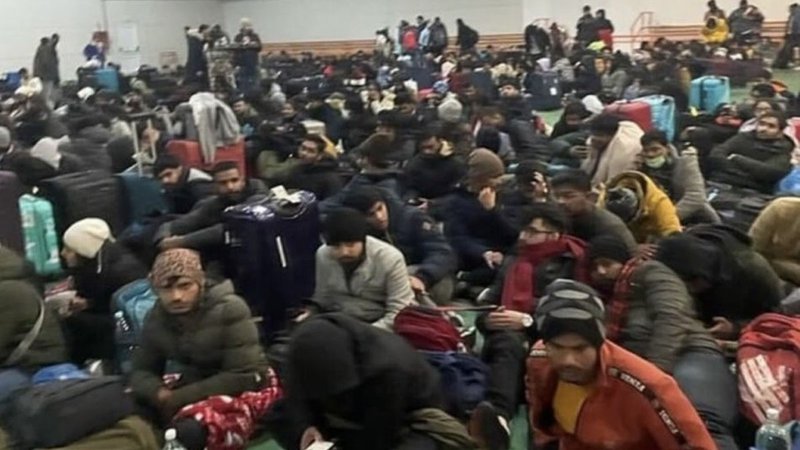 “We received the information that Slovakia, Poland and Hungary – countries bordering with Ukraine – have opened their borders to allow foreign citizens in the war-affected country to move into their land,” said the embassy.

It has urged all Nepalis in Ukraine to reach Slovakia, Poland and Hungary to return to Nepal safely. Nepal had issued a travel advisory on making travel to Ukraine.

The embassy has also pledged its support to Nepali citizens who might face constraints in their travel due to their travel documents or identity cards. “If there are any problems regarding passport or travel documents and the latter is needed instantly, you can send a photocopy of the passport and digital photograph to get the document,” read the statement.

The documents and photographs can be sent to eonberlin@mofa.gov.np. In case of any problem, Shahara Chaulagain, Third Secretary at the Embassy of Nepal in Berlin could be reached.

Two hundred and forty-four Nepali affected by the ongoing Russia-Ukraine conflict have safely reached their destinations.

A high-level committee formed the Non-Resident Nepali Association (NRNA) to support and rescue the Nepali affected by the tension between two close neighbors said this. In a press statement, the committee said they have left Ukraine and reached Poland, Slovakia, Romania, Hungary and Moldova.

Similarly, 154 people have reportedly got stuck along the borders towards Poland (130), Slovakia (12), Romania (10) and Moldova (two) and they are likely to cross the borders by this evening.

According to the NRNA Ukraine, 40 Nepali families are permanently residing in Ukraine.

A meeting of the committee headed by its chair and Nepal’s Ambassador for Germany, Ramkaji Khadka, decided to take necessary initiations to transport those Nepalis affected by the conflict to safer locations. The ambassador apprised the meeting that the Embassy had so far issued a travel permit for 34 Nepali displaced from Ukraine since the recent developments there.

According to the committee coordinator and NRNA vice-president Dr. Badri KC, Association president Kumar Pant is present along the border in Poland to facilitate the safe travel of Nepalis in crisis.

Russia’s invasion of Ukraine will have profound consequences for the stability of the region and for the future of European security, not to mention the immense human suffering.

It seems too early, almost inappropriate, to imagine what Ukraine’s future will look like while its presence is under military attack. The worst-case scenario is unfolding in front of our eyes, and the sad truth is that the West has been reduced to an observer of a war unleashed by a single man: Russian President Vladimir Putin.

The war is only in its early stages. What is certain is that there will be many casualties, high numbers of internally and externally displaced people, and a severe socio-economic crisis. Ukraine will need the support of the EU, in particular, to address the humanitarian and economic consequences of this war.

However unimaginable this may have seemed even in recent days, it is now unclear how much of its territory Ukraine will still control when the war eventually subsides or ends.

Ultimately, the war is a high-risk gamble on the part of Putin. The Ukrainian government and citizens will be more determined than ever to orient themselves westward. An opportunity for Ukraine to regain full control of its territory may arise only in the post-Putin era—and it is uncertain when that era will begin.

Experts hold the view that the Russian assault on Ukraine will shape new world order after end of cold war.

When Russian President Vladimir Putin launched his all-out invasion of Ukraine, he effectively ended the post-Cold War era. A new architecture for global relations must be built, and its shape will depend on whether Putin’s brutal campaign succeeds or fails.

The world watched in horror as a massive assault force attacked Ukraine from three sides with missiles, bombs, tanks and the electronic wizardry of cyberwarfare. Scores of nations including Nepal condemned the invasion. But the gut-wrenching fact is that Ukraine is fighting Putin by itself.

The contrast between Europe’s slow-motion and Russian President Vladimir Putin’s rapid full invasion of Ukraine could not be starker. Until two days ago, Europeans were discussing what Russian action would trigger what sanctions, while the Russian military was encircling Ukraine.

The EU’s package of sanctions will become the first phase, not the last, of an escalation. Even if military engagement has been ruled out, European publics are not prepared for the consequences of war on energy provision or the economy, nor are they ready to welcome refugees. Instead, streams of mis- and disinformation have littered European traditional and social media. Europeans need to be mobilized through evidence-based explanations—and outreach to Russians should be another pillar of a different communications strategy.

Beyond the €1.2 billion ($1.3 billion) package the EU adopted on February 21 to support Ukraine, the other countries in a region already destabilized by Russia will need more political energy and financial resources while NATO beefs up its Eastern flank in case the conflict widens.

Finally, Europeans need to reach out to civil society in Eastern Europe and Russia to energize those networks that have been the drivers of positive change across the former Soviet Union in the name of human rights, freedom, and self-determination.

The repercussions of the war in Ukraine will no doubt be felt in the Western Balkans. For one thing, the conflict is polarizing opinion there. For anti-Western nationalists in Serbia and beyond, Putin’s actions are tantamount to giving the United States and its allies in Europe a taste of their own medicine. What goes around comes around, they say, pointing at the 1999 Kosovo intervention.

Those who support integration into the EU and NATO see the war in Ukraine as a repeat of former Serbian president Slobodan Milošević’s onslaught against Croatia and Bosnia and Herzegovina in the earlier chapter of Yugoslavia’s disintegration.

Neither analogy works perfectly, of course, but the war of narratives is real, has raged for years, and is about to peak in the coming months. Expect Russia to fan it further with the help of its media mouthpieces, proxies, and fellow travelers in the region.

Will Russia take an even greater risk and open a second front in, say, Bosnia, where the Serb-majority entity of Republika Srpska has exited the common state in all but name? That is not very likely. A showdown with the EU and NATO will bring no benefit and will add to Putin’s problems. There are more cost-effective ways to stir up trouble than by sending in the paratroopers, with all the attendant political risks. Russia will do more of the same: support Republika Srpska’s Milorad Dodik, nurture links with Serbian President Aleksandar Vučić, and back anti-Western politicians and parties elsewhere in the region. In short, Moscow will wage its political war as before.

As the Russian military offensive continues in Ukraine amid reports of hundreds of casualties, does the invasion mark a watershed for EU security and defense?

These are among the darkest hours Europe has experienced since World War II and the Yugoslav Wars in the 1990s, which were terribly violent and led to so many deaths. Europeans now know that war is possible yet again on the continent, but are they prepared to experience this kind of war as well as pay the price of its economic and humanitarian consequences? 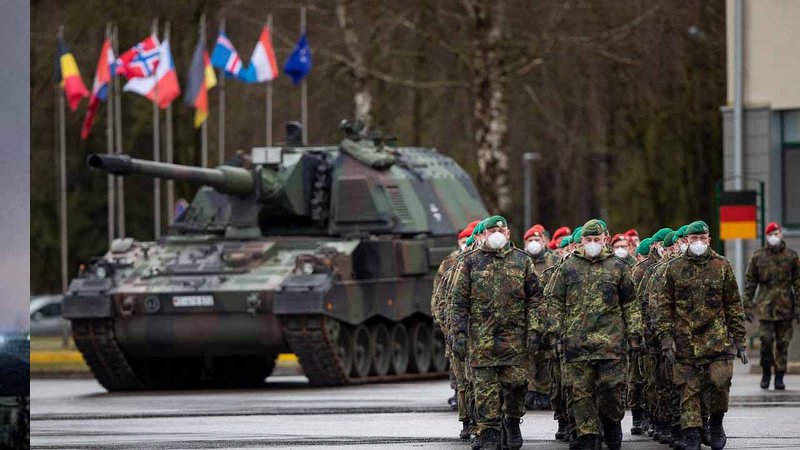 The crisis is already testing the EU’s readiness to defend the post–Cold War European security order. Much of the public debate on the crisis has portrayed European governments as divided, weak, and vague. Yet, the conflict might just be the catalyst to reinvigorate the EU’s security and defense debate and force Europeans to shift from a security order shaped by soft power to one that is yet again dictated by the harsh realpolitik of hard power.

The key to achieving a European common position in Ukraine is coordination among EU member states and the agreement of all leaders to tougher sanctions. The war will increase pressures not only on governments to rethink their defense budgets but also on Europeans to re-evaluate their long-held belief that war is no longer a European reality after more than thirty years of peace.

This will likely make recent EU defense capability development initiatives, such as the European Defense Fund, more attractive. In times of economic austerity, this change of mindset should trigger a new momentum for EU collaborative capability projects and programs.

But most importantly, the crisis signals a regrouping around NATO as the main politico-military alliance in charge of collective defense. In these fast-moving developments, NATO’s greatest responsibility is reaffirmed: to protect and defend territories and populations against attacks and emerging threats and address all challenges that affect Euro-Atlantic security.

For Nepal, the Russian invasion of Ukraine will have a huge economic implication. Rising oil prices have already affected Nepal’s balance of payments and the decline of tourists from Europe will further push back the revival of Nepal’s tourism industry.

Malaysian Home Minister In Nepal By Agencies 2 days, 19 hours ago