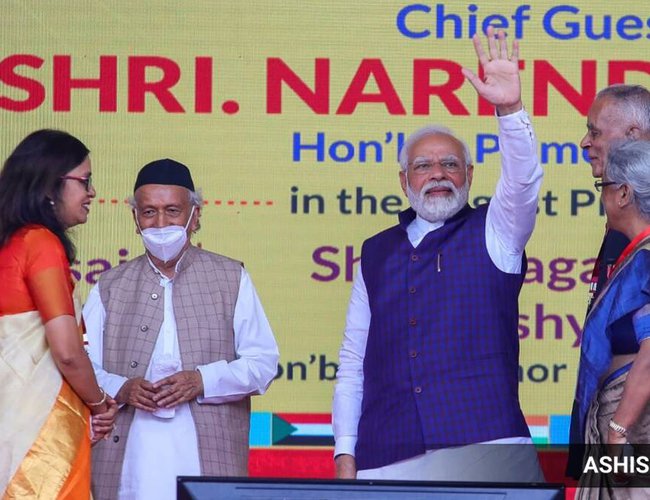 PM Narendra Modi said that more than 1,000 students have been evacuated from Ukraine till date.

The fact that India succeeded in evacuating its nationals amid the war in Ukraine is proof of the country’s growing influence in the world, Prime Minister Narendra Modi said on Sunday.

“You have seen how, under Operation Ganga, India is bringing its citizens safely out of the war zone. Many big countries are facing difficulties in doing so. But it is due to India’s increasing influence that we have brought thousands of students back to their motherland,” Modi said at the commemoration ceremony of the Golden Jubilee of Symbiosis University.

More than 15,900 Indians have been brought back since the special evacuation flights began on February 22, the Ministry of Civil Aviation said in an official release on Sunday. Eleven special civilian flights had brought back 2,135 Indians on Sunday, the release said.

The Prime Minister said India was now on the way to becoming a global leader in fields it could not even think of venturing into earlier.

Meanwhile, the Indian Embassy in Ukraine issued an advisory for students stuck in Sumy asking them to be ready to leave on short notice.

The Indian Embassy in Ukraine on Sunday advised students stuck in Sumy to be ready to leave on short notice. The embassy claimed that there is a team stationed in Poltava City to coordinate the safe passage of Indian students stranded in Sumy. The time and date of the evacuation will be issued shortly, the embassy said in a social media post.

Taking to microblogging site Twitter, "Team from Embassy of India is stationed in Poltava City to coordinate the safe passage of Indian students stranded in Sumy to Western borders via Poltava. Confirmed time and date will be issued soon. Indian students advised to be ready to leave on short notice."