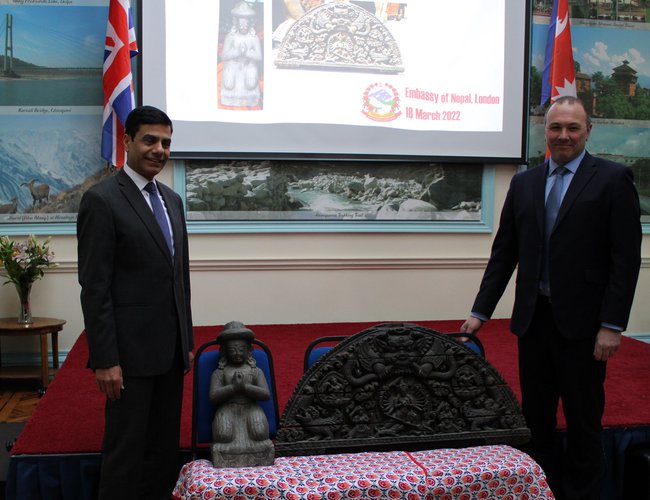 Detective Superintendent John Roch from the Metropolitan Police of London handed over the two cultural artefacts of Nepal to Gyan Chandra Acharya, Ambassador of Nepal to the United Kingdom at a handover program organized at the Embassy.

The artefacts scheduled to return to Nepal include a carved wooden Torana from the Sixteenth Century and a carved stone sculpture of a kneeling devotee with the Namaskar Mudra from the Eighteenth Century.

The Torana was lost from the Kumari Baha, the east side of the Hanuman Dhoka Durbar Square in Kathmandu in the 1980s-1990s. The sculpture of the kneeling devotee is originally from the Manjushri Temple near Om Bahal, Kathmandu which was lost in the 1980s.

Receiving the artefacts, ambassador Acharya thanked the Metropolitan Police and all the officials of the Art and Antiques Unit involved in recovering the lost art objects of Nepal. He remarked that the proactive and thoughtful collaboration from the Metropolitan Police has positively contributed to Nepal’s national efforts to recover and reinstate the lost cultural goods. He also appreciated the support received from Dr.Emiline Smith and media in this endeavour.

Speaking on the occasion, Detective Superintendent Mr. John Rochremarked that the Metropolitan Police’s Art and Antiques Unit is proud of its role in the recovery of these two precious pieces, and are delighted that they can be returned to Nepal. Thankfully they were photographed in situ prior to being stolen, and these archives are an important resource which will no doubt assist with the recovery of other stolen artefacts in the future. When the police informed the dealer that the pieces had been stolen from their religious sites and illegally removed from Nepal, he volunteered to disclaim them so that they could be returned. He also thanked everyone who had contributed to this investigation and made the repatriation process possible.

Dr Emiline Smith, the Lecturer in Criminology at the University of Glasgow remarked that she had been proud to be a part of the process of repatriation of those cultural objects to their rightful owners in Nepal.

The Embassy and the Office of the Metropolitan Police expressed their willingness to work closely and promote the collaborative efforts for the preservation of the cultural heritage. Both sides also reiterated their commitment to further strengthen the long-standing people-to-people relations between Nepal and the United Kingdom.

representative from the Foreign, Commonwealth and Development Office and Police Officers from the Metropolitan Police and the Embassy officials were also present at the handover ceremony.

The two artefacts will be delivered to their original home through the Department of Archaeology of the Government of Nepal in due time.

Malaysian Home Minister In Nepal By Agencies 3 days, 16 hours ago