Funded by the European Union and implemented by UN-Habitat Nepal in close collaboration with local government and local community, Pilachhen has shown how it is possible to revive tangible and intangible heritage sites such as Ponds, Patis and Dharas, the water spouts, helping the switch to green and sustainable settlements. Destroyed by the great earthquake of 2015, the ancient Newar settlement of Patan has now turned into a place where one can see heritage, tradition and livelihood thriving together. At a time when Kathmandu Valley’s traditional settlements are gradually disappearing, the support extended by European Union has revived the ancient treasure of Pilachhen. Spending over three hours, mingling, sharing and walking with local people and local leaders, Nona Deprez, the ambassador of the European Union, observed the activities completed under Parya Sampada Pilachhen Program 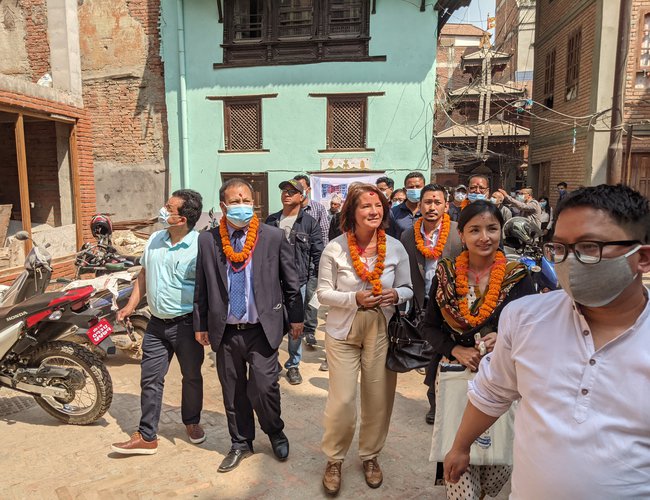 When Nona Deprez, the ambassador of the European Union to Nepal, arrived at Pilachhen on March 15, the long wait of the local community to warmly greet and welcome the guest, for the valuable financial support that helped reconstruct their ponds and revive the local tradition and culture, had ended.

The day was also significant for the Pilachhen locals because they were hosts to a gathering of all the important persons, including Mayor of Lalitpur Metropolitan City (LMC) Chiribabu Maharjan, a senior government official from the Ministry of Culture, Tourism and Civil Aviation, Nepal Tourism Board, higher officials from UN-Habitat and community leaders.

As ambassador Deprez, and Mayor Chiri Babu Maharjan jointly inaugurated Pilachhen Pond and laid the foundation for Pilachhen Pati, a long dream of local residents to revive their traditional settlements had come true. 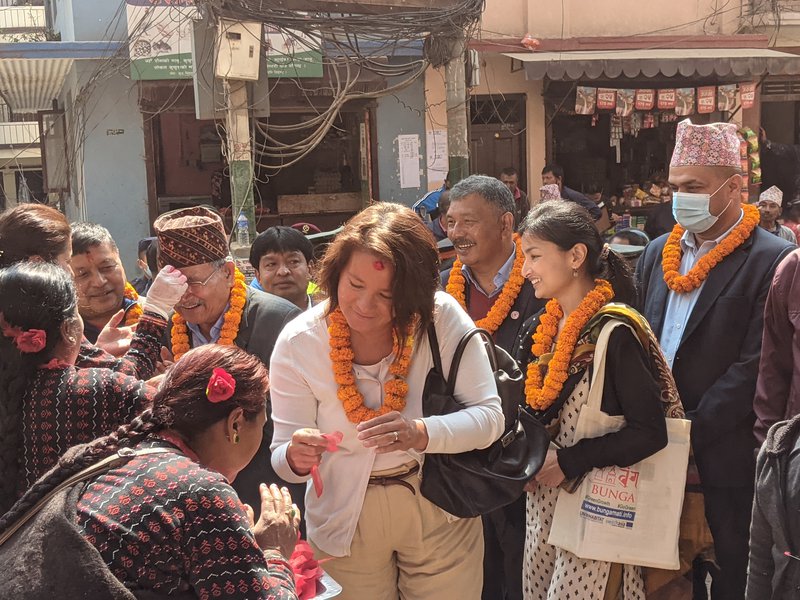 In their traditional attire and music, local people of Pilachhen, a Newar settlement, 10 kilometers south-east of the capital Kathmandu, had enthusiastically guided Ambassador Deprez and Mayor Maharjan to the area.

It was their day of celebration to welcome Ambassador Deprez and Mayor Maharjan in their traditional elegance as the guests jointly laid the foundation stone of the pati.

Besides, the city dwellers also felt generous to show all the activities and construction sites to ambassador Deprez, who spent almost three hours interacting with the local people and entrepreneurs.

Thanking the local community for the warmth of the welcome and greetings, ambassador Deprez said, “I would like to thank Mayor of Lalitpur Metropolitan City, Ward officials, UN-Habitat and local community for organizing this beautiful event in this beautiful Patan city of Pilachhen. It is really a wonderful opportunity to come here to meet and speak to all of you and to see through my eyes the tangible and intangible heritage of this old and beautiful Newar settlement. European Union has supported UN-Habitat for this and this is a beautiful example of support given to the Switch for Asian cities. The project has helped municipalities in the Kathmandu valley to move to green and sustainable city preserving tangible and intangible culture.” 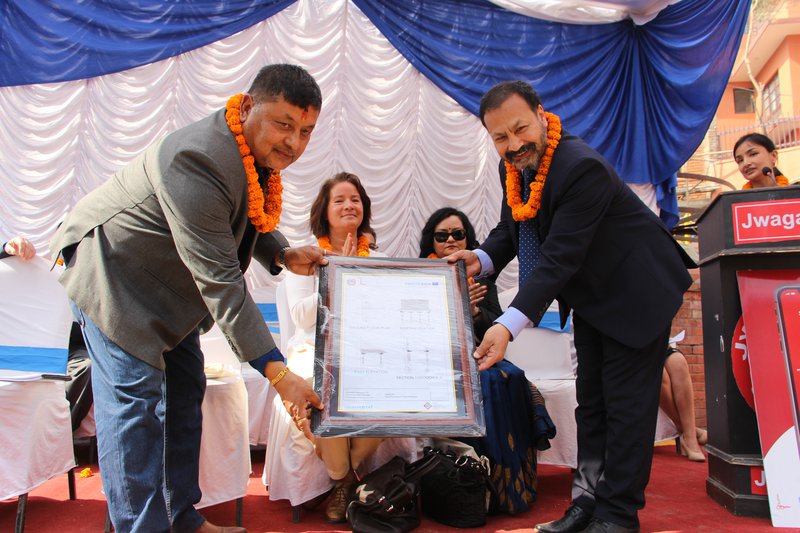 Local people and elected representatives also utilized the day briefing on the activities allowing her to mingle with the local people.

“We are happy to see the ambassador of the European Union to Nepal in our area. We are very grateful to them. Without their support, the reconstruction of historic ponds and other activities to enhance the livelihood of local people would not have been possible. Similarly, the presence of Mayor of LMC Chiribabu and other government officials in this small locality is highly valuable,” said Kul Bahadur Maharjan, Ward Chairperson, LMC 7.

Funded by European Union and implemented by United Nations Human Settlements Program, Nepal in close collaboration with the local community, elected local government and backing of the Federal government, Parya Sampada Pilachhen Program is unique, of its kind, launched following the devastating earthquake of 2015. 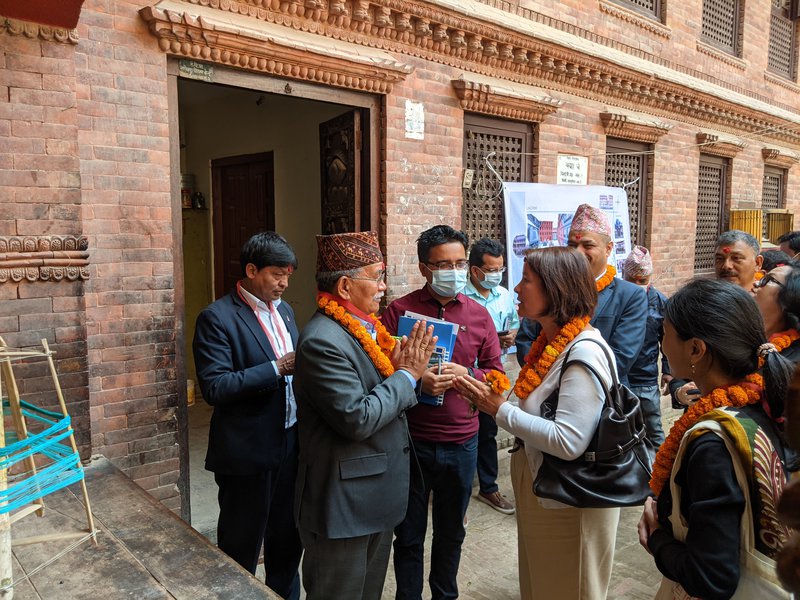 “This is the best example of collaboration among different stakeholders to revive and restore tangible and intangible cultural, heritage sites aiming to improve the livelihood,” said Mayor Maharjan. “LMC is grateful to European Union for generous funding aimed to revive our culture and heritage.”

When Ambassador Nona Deprez and Mayor of LMC Maharjan jointly inaugurated the Pond and laid the foundation of the Pati, two highly valuable heritage sites in Pilachhen Tole, a new chapter was starting for the settlement.

“This program is not only the reconstruction of pond and pati. This also helps empower women through entrepreneur’s skills, promoting the local products,” said Ganga Maharjan, owner of local brand pickle. Along with tangible heritage sites, local women groups also learn how to produce local products.

“We are happy that we were able to show our special guest ambassador Nona Deprez how the program helped revive heritage sites and transform a community.”

Although the day was hectic for the residents of Pilachhen, they showcased the activities to the ambassador Deprez who keenly observed different events organized to demonstrate the development activities including the livelihood promotion. 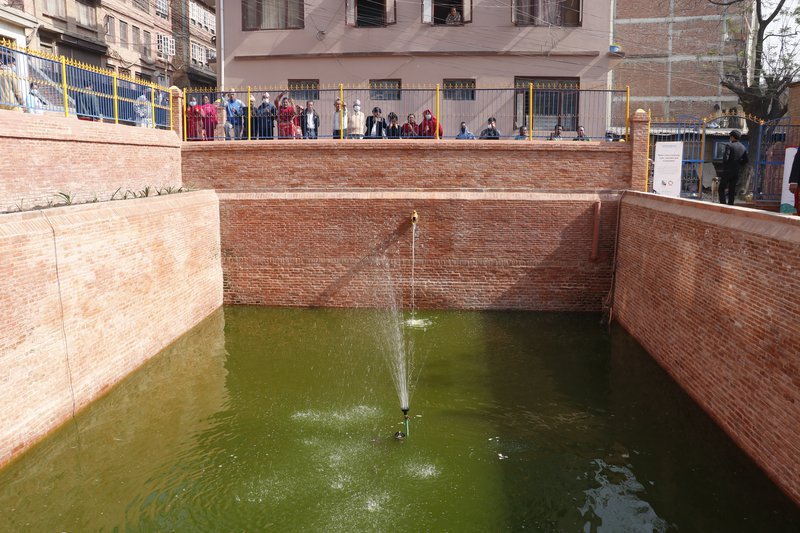 The event featured an art gallery, food stall, bhajan pati and locally produced handicrafts and local goods like pickles and soap. At the end of the program, the organizer presented a short documentary of the local Pilachhen.

Funded by the European Union under the SWITCH Asia Program, which has been assisting different stakeholders to complete the overall re-construction of the settlement, the project is a close collaboration among the development partners, local government and community.

Unlike many other programs, all the stakeholders joined in the program to take its ownership. Along with local communities, local level ward, LMC, the representatives from the Ministry of Culture, Tourism and Civil Aviation and Nepal Tourism Board expressed that they will own the project.

All these activities helped to enhance the sense of ownership of the project.

Pilachhen is one of the most affected traditional settlements from the 2015 earthquake. Most of the houses collapsed during the disaster and the community is still working on reconstruction.

PARYA SAMPADA project has been supporting the Pilachhen community, working together with MAYA FOUNDATION, in reconstruction, enhancing the livelihood of the community and promoting tourism activities in the traditional area. The project funded by the European Union under SWITCH Asia Program has been assisting different stakeholders to complete the overall re-construction of the settlement.

The project has supported the preparation of the “Heritage Settlement Recovery Plan of Pilachhen”. This comprehensive plan guides the local bodies and other stakeholders on the reconstruction of the public amenities. The project has supported the preparation of documents for the private buildings in the Build Back Better module. Detail drawings and technical assistance were provided for the construction of “Pati” and “Ponds” in the settlement.

Similarly, the project has also been supported in different entrepreneurship training which shall enhance the capacity of the youth and women. Despite the disturbances from the global pandemic, the project is working together with the community in the promotion of different tourism-based activities. Supporting the local community in the conservation of intangible heritage, i.e., flute training is one of the remarkable achievements during the lockdown. “Tourism based Entrepreneurship Development Plan of Pilachhen” and “Tourism Development Plan of Pilachhen” are the milestones that shall support the local governing bodies and other stakeholders to ensure the overall development of the community. 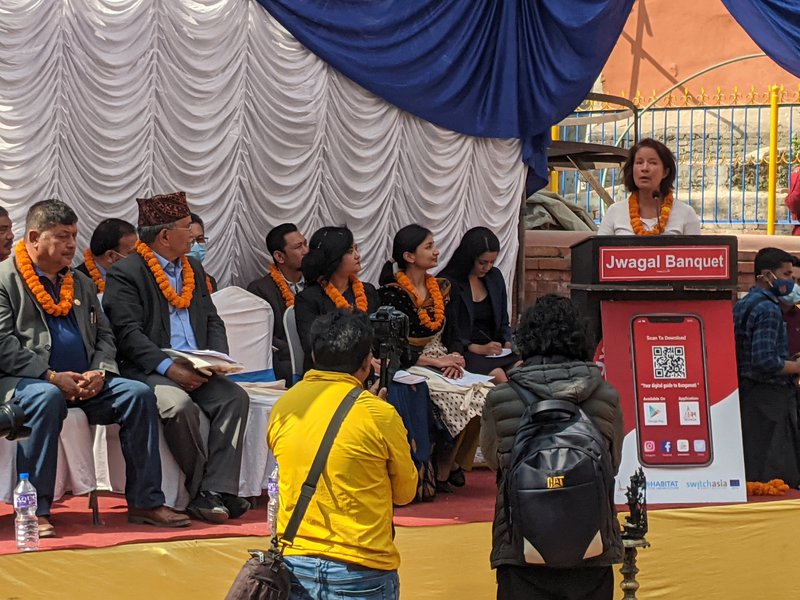 Damaged and devastated by the Gurkha earthquake in 2015, the Newari settlements have been revived, preserving their past glory. Supported by the European Union and implemented by UN-Habitat through Sustainable Tourism and Green Growth collaboration with the local community, NGOs, Lalitpur Metropolitan and NRA, Sustainable Tourism and Green Growth for Heritage Settlements of Kathmandu Valley is a game-changer for the local community.

At a time when many other traditional settlements are still in the process of revival, the local community of Pilacchen has already seen the results yielded. Although COVID-19 has badly shaken Nepal’s tourism sector due to the lack of foreign tourists, Pilachhen is attracting domestic tourists.

For the support given by the Deprez European Union to revive and preserve their city and way of life, Ambassador Nona Deprez’s was received well as her presence was highly important for them. The warm welcome given to the ambassador was their reflection of love for the revival of their city.

During the last four years, Pilachhen has been drastically transformed from being amidst devastation and destruction to a city reviving its traditional settlements. Along with the private houses, Falacha Pati, stone spout, traditional ponds, street solar lights, renovation of public toilets and viewpoint have already been constructed.

“Training young people in traditional crafts like woodcarving is a great example of the economic opportunities of promoting culture,” said ambassador Deprez who interacted with the local community observing their way of life.

Mayor of Lalitpur Metropolitan City Maharjan lauded the support given by the European Union for the revival of the two traditional Newari settlements and livelihood. “LMC and local community are very grateful to European Union for its support and UN-Habitat and other NGOs for their contribution to restoring the cities in the old style.”

In close collaboration with local elected representatives, local communities and the Nepal government, the project has been reviving not only the physical structures but also the traditional lifestyles, cultures and handicrafts. Thus, the multi-purpose training center is highly important. 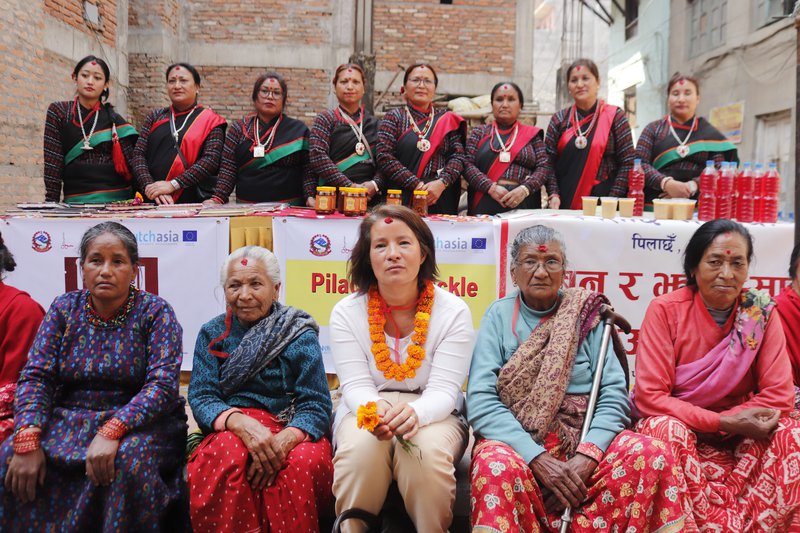 The project is also promoting entrepreneurship among women and youth. With SME engagement and investment, product innovation and sector campaigns, the project hopes to support the livelihood of the people.

Had the UN-Habitat not sought solutions through sustainable tourism, Pilachhen would also not have revived as it is today. UN-Habitat launched the project with the main objective of reducing poverty through building the economy of people contributing towards mitigating climate change, promoting sustainable development through technical assistance policy support and pilot demonstration. 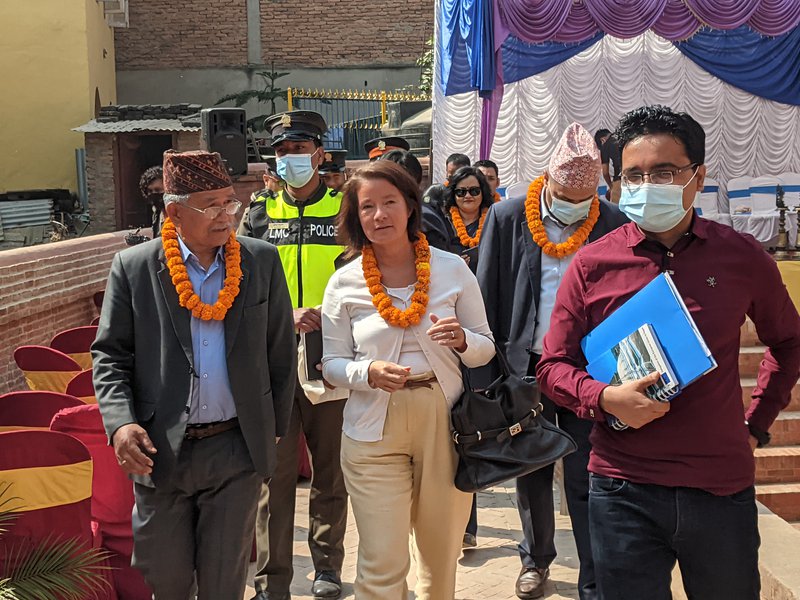 Community mobilization, heritage conservation and livelihood enhancement are three pillars of the project. These are key factors for the revival of Pilachhen as well. During the visit of ambassador Deprez, local people have shown how their tradition and culture can lure tourists in the future thanks to the support of the European Union. 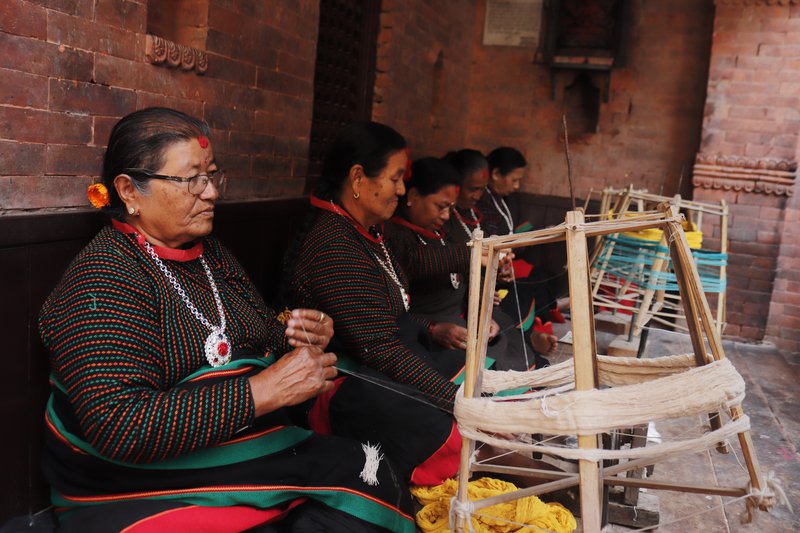 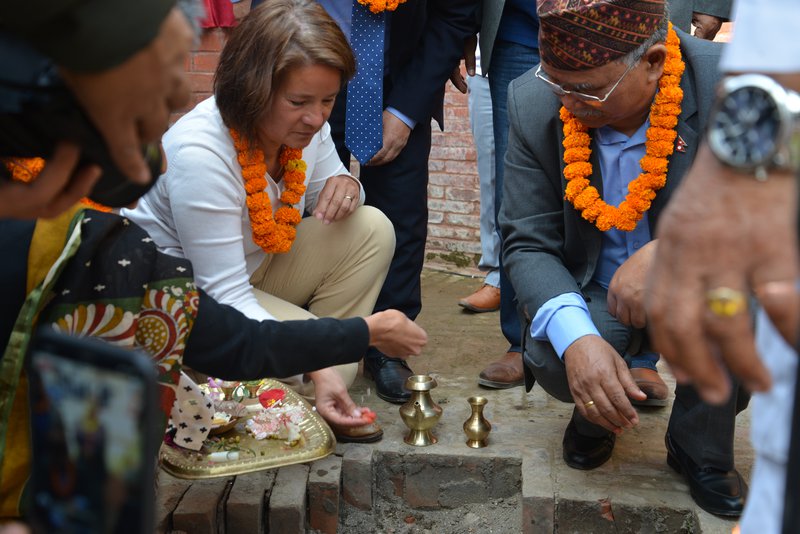