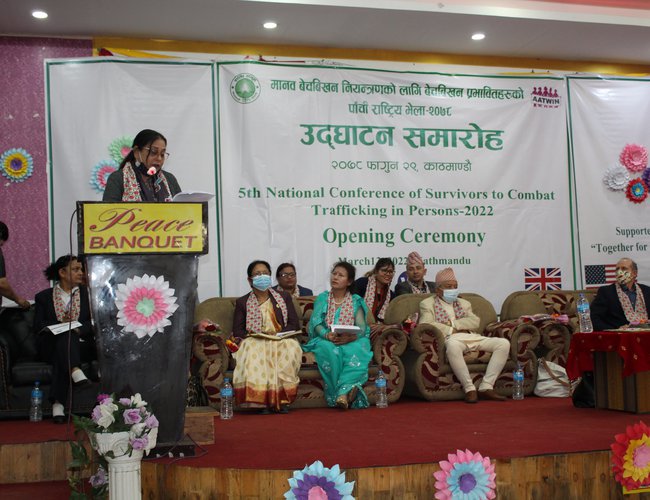 At a time when political parties are heading for the nationwide local elections next month and provincial and federal elections are coming closer, the declaration passed by the Fifth Conference of Survivors of Combat Trafficking In-Person 2022 Conference is highly important to draw the attention of national parties to publicly express commitment against human trafficking..

Concluded recently announcing the Jorpati Declaration, the fifth Conference of Survivors of combat trafficking in person 2022 also called for an immediate end of human trafficking.

Organized by Shakti Samuha led by Chari Maya Tamang, who herself was a victim of trafficking; the declaration said that human trafficking is not only a violation of human rights but also a serious crime against humanity.

The two-day conference, which was concluded on March 12-13, has stressed the need to take human trafficking not only as social agenda but also political agenda in the context of globalization. Along with the state, there also need commitments and accountability of political parties to end human trafficking.

Conference of Survivors of combat trafficking in person was held in 2007, 2008, 2014 and 2019 first, second, third and fourth respectively. Issued by chair Tamang and vice president Tara Bhandari, the declaration was approved by 205 persons representing different stakeholders and representatives from all seven provinces and came from all seven provinces and national levels.

The declaration among others calls for the Ministry of Women, Children and Senior Citizen to formulate the act, directives and working producers immediately necessary for the effective rescue work and returning to the county and rehabilitation. The declaration reminded that all those works related to rescue and rehabilitation of those persons trafficked are either delayed or getting difficulties.

The declaration among others calls for all three tiers of government local, provincial and federal to provide effective support for education, livelihood-related skills and other sustainable integrated programs to those persons rescued from trafficking.

The EU And Nepal Hold Their 14th Joint Commission By NEW SPOTLIGHT ONLINE 10 hours, 51 minutes ago