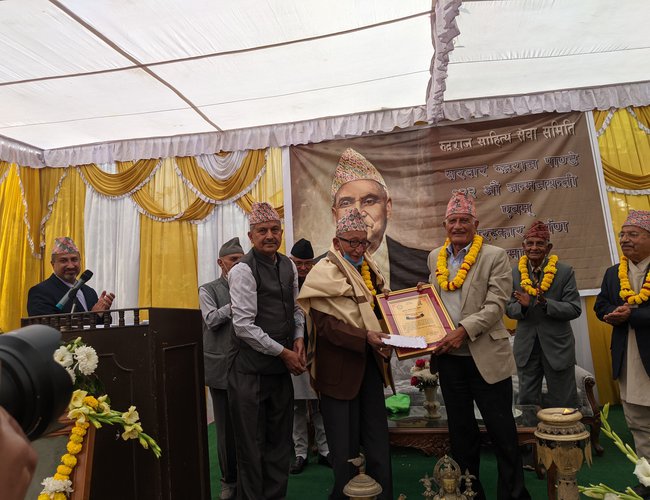 At a time when many renowned old figures of Nepalese society are disappearing due to the negligence of state and their near and dear ones, family members of Sardar late Rudra Raj Pande have shown an exemplary work by annually organizing the program of awarding valuable work of people of Nepal’s different walks of life.

From Nepali literature to education and social reforms, Sardar Rudra Raj Pande’s contributions are well known. His novel Roopmati is the largest volume of a Nepali novel which many compare with Leo Tolstoy’s War and Peace in describing the details.

As a vice chancellor to transfer the Tribhuwan University from Tripureshwor to Kirtipur, late Sardar Pande, who had also opened education for lower cast people at Durbar School, took several decisions to upgrade Nepal’s higher education.

This year historian and litterateur Chitta Ranjan Nepali was felicitated for his contribution to Nepalese History with Sardar Rudra Raj Pande Award, which carries Rs, 25000.00 in cash.

The first Vice Chancellor of Kathmandu University Professor Dr Suresh Raj Sharma conferred the award to historian Nepali on the occasion of the 122nd Anniversary of Sardar Rudra Raj Pande amid a function in Kathmandu.

Historian Dr. Manandhar shared the whole episode of how late Pande transferred Tribhuwan University’s academic activities from Tripureshwor to Kirtipur. “His contributions to modernize education system in Nepal are immense and remembered forever.”

At a time when new generations of people are forgetting Nepal’s many renowned figures due to negligence of their own children, Dr Govinda Tandon, convener of the Award Committee, hailed the efforts taken by Rudra Raj Pande’s family. “This is a great contribution for the country. I would like to express my sincere gratitude to the great family members of late Pande.”

He also spoke on the contribution made by Chitta Ranjan Nepali in the field of History. Awardees Chitta Ranjan Nepali thanked the committee for bestowing him the prestigious award. On the occasion, the chief guest Prof Dr Suresh Raj Sharma reminisced on the formative days of Tribhuwan University on the able leadership of Sardar Rudra Raj Pande as Vice Chancellor.

Govinda Prasad Sharma Regmi, the secretary of the Samiti, welcomed the participants and shed light on its activities. Samiti has been felicitating national personalities in the field of education, literature, history and spirituality on a rotation basis yearly.

At the program attended by large numbers of scholars and people from different walks of life, Dr. Badri Raj Pande, son of late Rudra Raj Pande, thanked guests for attending the program on a short notice.

“Nepal’s many renowned figures like Bal Krishna Sam, historian Baburam Acharya are disappearing from scene due to negligence of state and their family members, the work of Sardar Rudra Pande is shining,” said Dr. Tandan. “Everyone has to learn from Pande family.”

INGOs And NGOs Are Close Partners Of The Government: Minister Regmi By NEW SPOTLIGHT ONLINE 2 days, 8 hours ago

Foreign Secretary Paudyal Thanked China For The Preparation Of The Return Of Nepali Students To China By NEW SPOTLIGHT ONLINE 2 days, 13 hours ago