Given the looming uncertainty over the restoration of project by mid-April, Minister for Water Supply visited the project site 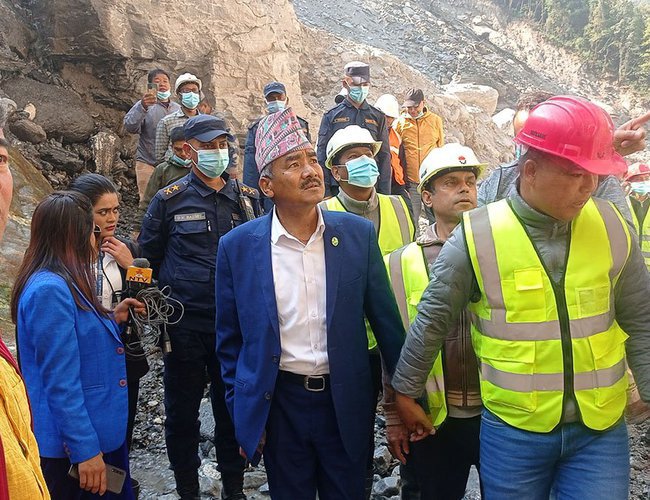 Even as the work on removal of the deposition of materials and landslide debris at Melamchi Project has seen 70 percent progress so far, project officials are expressing doubt over bringing water into the pipes by Mid-April. Amidst the doubts, Minister for Water Supply Umakanta Chaudhary paid an inspection visit to the project site on March 16.

According to the project, the removal of sediment piled up at Ambathan would take a bit longer as the sediment has been amassed in a huge quantity. The official argues that the resumption of the water supply will depend upon the conditions of the gates of the tunnels in Ambathan.

“If tunnel gates from Gyalthun to Ambathan have not been damaged badly, there is a possibility to bring the water in Mid-April. If the gates were damaged completely, the water supply may be delayed for another five to six months due to the procedure, import and their installation process,” Rajendra Prasad Panta, information officer of Melamchi Water Drinking Water Development Board, told BBC Nepali Service. “Although we may be able to complete the renovation work by the first week of May, we may not be able to supply water due to the onset of monsoon.

“As the gate in Ambathan is buried by debris, we are unable to open it. Only after opening the gate, we can say for sure about bringing the water to Kathmandu by April. We have been doing the maintenance of headwork and gate.

“We have already removed the debris in gate no 1 and gate no 9 using explosives. There are also some problems with gate no 38. If we restore gate no 38, we may be able to bring the water to Kathmandu through this alternative tunnel.

“The current problem is the accumulation of almost 20 meters of flood debris. We have been cleaning it at the headwork site. During the process, the contractor found big boulders. It is a very narrow place and we are unable to use many equipment. 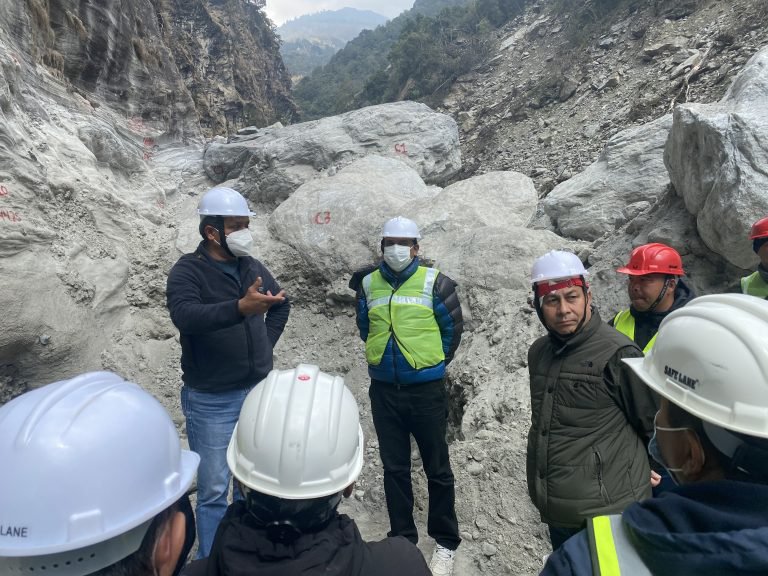 “Now we are clearing the debris deposited in the Ambathan tunnel opening gates number 1, 9, 38 and other gates inside. The temporary revival of the project will depend on the state of the gate. If the gates are ready just after doing simple maintenance, we will be able to restore the water supply by mid-April. If they cannot work and need a new one, we will not be in a position to divert water to Kathmandu by mid-April. In such a situation, we need to order new gates from the manufacturer and it will delay the project by a few more months,” Panta told BBC Nepali Service.

During his visit, the Minister instructed all agencies concerned to work in such a manner that Melamchi Project's water could be supplied to Kathmandu Valley within mid-April this year.

Minister Chaudhary, who reached Ambathan, the source of the Melamchi Drinking Water Project via Sundarijal Tunnel, pledged additional technical assistance and human resources for the project if need be.

During the inspection, the Minister assured that the government was ready to make pending payment on time but there should not be any delay in the project work under any pretext.

According to him, the Ministry for Water Supply, Melamchi Drinking Water Development Committee and stakeholder government agencies were positive about the demands of affected locals and flood survivors.

Similarly, senior divisional engineer Padam Bahadur Kunwar informed that the removal of sediment piled up at Ambathan would take a bit longer as he said sediment has been amassed in a huge quantity. Removal of the deposition of materials and landslide debris has so far achieved 70 percent progress.

According to him, they were working to ensure the re-distribution of Melamchi's water to Kathmandu Valley within mid-April. Likewise, Helambu rural municipality chairperson Nima Gyalzen Sherpa urged the government to increase the amount from the existing Rs 500,000 to flood survivors to rebuild their houses.

The project, upon implementation, had begun supplying water to Kathmandu Valley. The flood and landslide in the last monsoon caused severe damage to some parts of the Project, impeding the supply of targeted 170 million liters of water per day to the Valley.