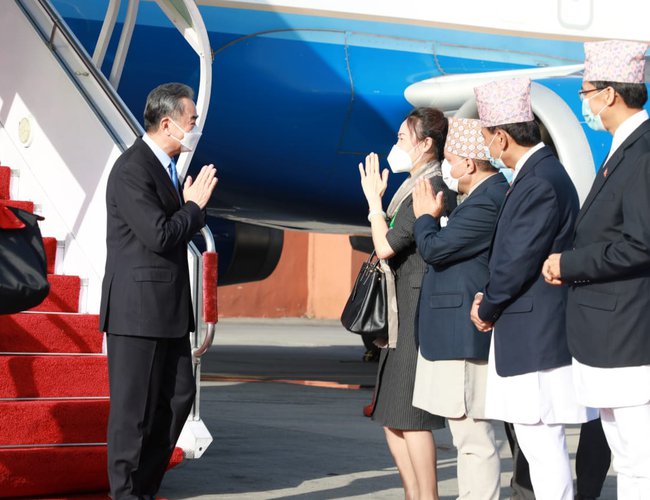 Nepal’s mountains and Himalayas attract people from all over the world as a place to get respite, peace and tranquility. Be it short or long, a hike is regarded as a capsule for relaxation and peace.

State Councilor and Minister of Foreign Affairs of the Republic of China Wang Yi is not an exception to take pleasure of hiking in Kathmandu. Arriving in Kathmandu on 25 March for a three-day official visit following the completion of a hectic and complex visit to Pakistan, India and Afghanistan, Chinese foreign minister Yi found some ease and respite in Nepal.

Although Nepal-China relations remain a little chill following the ratification of the MCC Agreement by Nepal’s parliament, the meeting was not hot compared to China’s dealing with India, Afghanistan and Pakistan.

Whatever hard and harsh words China uses, it understands Nepal’s limitation and constraints. Similarly, Nepal too understands Chinese concerns and her sensitivity.

Chinese foreign minister spent a day in Pakistan, a few hours in Afghanistan and half a day in India. However, he spent three days in Nepal, During his visit; he spent some of his leisure time going hiking in Shivapuri.

However, it neither appeared in any media nor did anybody notice that he was hiking to Shivapuri. Spending three days quietly in Nepal taking a hike, Chinese Foreign minister Yi, the busiest diplomat in the world, dealing with tough international negotiations and diplomacy, gave a gesture that Nepal is a comfortable place for them.

Finally, State Councilor and Minister for Foreign Affairs of the Republic of China Yi and his delegation left for Beijing in a happy mood. Foreign Secretary Bharat Raj Paudyal and other officials of the Ministry of Foreign Affairs stood at Tribhuvan International Airport to give them a warm welcome and warm send-off.

According to Chinese news agency Xinhua, Nepali Prime Minister Deuba and Chinese foreign minister Wang Yi agreed at their meeting that both sides will make good use of the Nepal-China Joint Consultation Mechanism to complete existing key cooperation projects and explore new areas of cooperation.

China will work with Nepal to safeguard the principle of non-interference in internal affairs and the basic norms governing international relations, resist unilateralism and oppose power politics, and contribute to regional peace and stability, Wang said.

Noting that China-Nepal cooperation enjoys vast potential, both sides agreed that deepening practical cooperation not only meets the needs of both countries, but will also inject strong impetus to regional development and prosperity.

Wang said China and Nepal have always supported, trusted and helped each other. The traditional friendship between the two countries has been enhanced through their joint fight against the earthquake and COVID-19, and their win-win cooperation has witnessed continuous and effective progress.

China-Nepal relations have become an example of equal treatment and win-win cooperation between countries large and small, and a demonstration of China's practice of the good-neighborly diplomacy, Wang said.

Guided by the important consensus reached by the leaders of the two countries, China stands ready to expand all-round cooperation with Nepal and push forward their strategic partnership of cooperation featuring ever-lasting friendship for development and prosperity, he said.

The two sides also exchanged views on strengthening multilateral cooperation. Deuba said the Nepali side believes that fairness and justice should be upheld in international affairs, and the United Nations Charter and international law should be abided by.