Having spent almost three and half decades running single-handedly Nepal’s most respected and hot political house of Ganesh Man Singh, Sirjana Singh, spouse of Prakash Man Singh, is a good knowledge political person. With the marriage of two grown-up sons taking the family affairs, Sirjana decides to use her political and managerial skills as a mayor of Kathmandu Metropolitan City. At a time when many old Congress stalwarts are showing interest to contest the elections, the Nepali Congress with the recommendation of the Kathmandu District Congress has chosen the name of Sirjana Singh for the mayoral candidate of Kathmandu. Mired by so many mismanagements with lack of a visionary mayor, Nepali Congress rightly choose Sirjana Singh, a humble, gentle and reconciliatory behavior, as a candidate to lead the country’s capital. Low profile and soft-spoken Singh can change the face of Kathmandu with her vision and planning 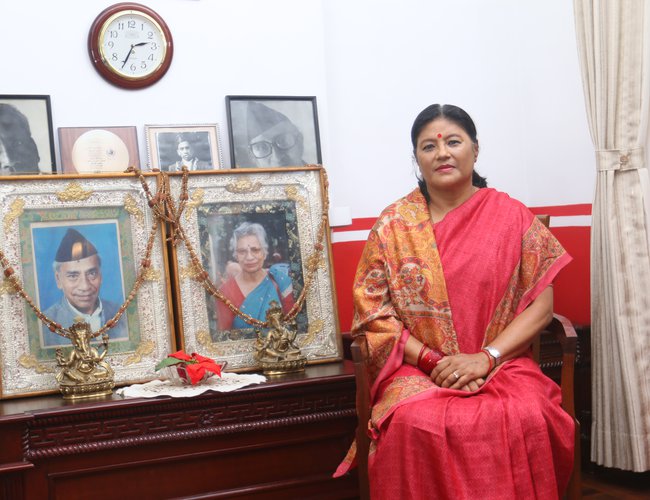 In her Twitter account, Sirjana Singh has introduced herself as a Social Work, Advisor NWA, Homemaker, Mother of Prabhas & Bhaskar. Jointed in 2015, she has been active on Twitter defending the liberal democracy and Nepali Congress.

As it said a humble person does not flaunt their wealth, status, accomplishment, or anything else they may have. They are modest and often embarrassed by the praise. Instead of being proud being themselves, a humble person will be happy for others who deserve credit. 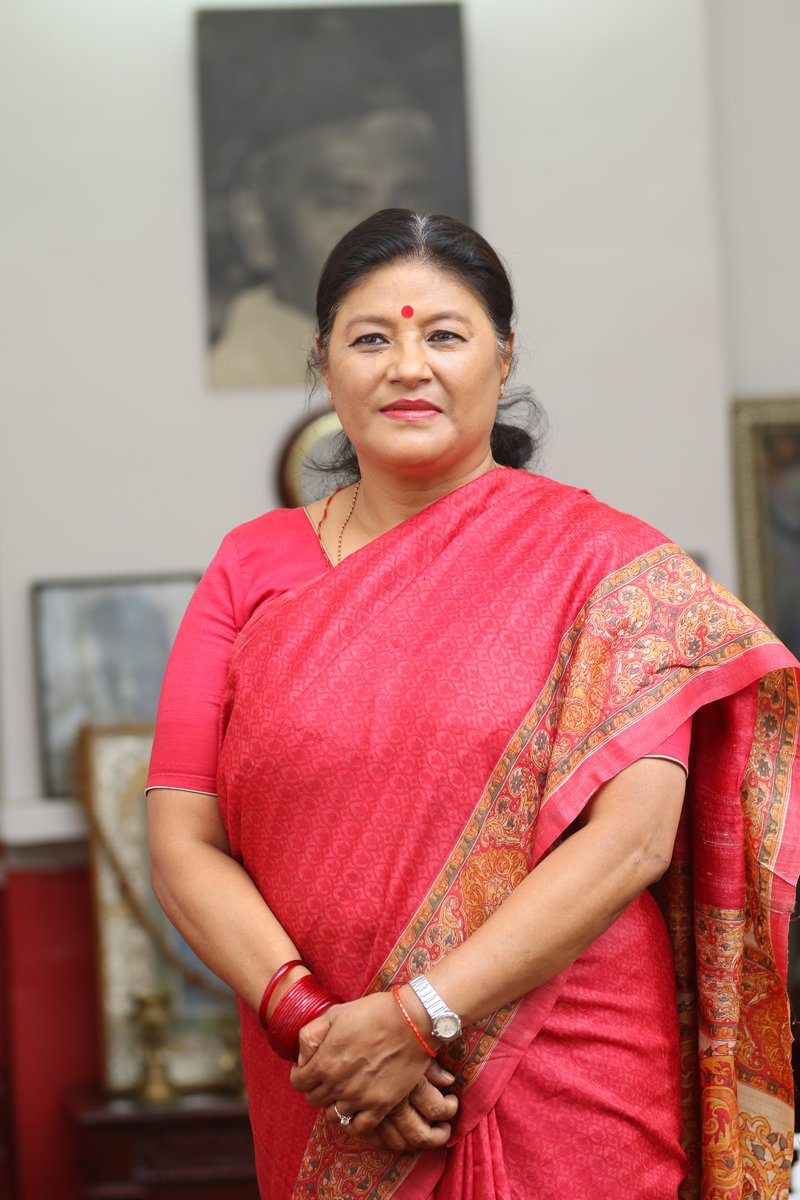 Giving a short introduction on social media, Sirjana Singh, who is an active political worker, daughter in law of Nepal’s widely respected revolutionary family, shows her humble character. She knows the ins and outs of politics but she remains silent over it. An active social worker and affiliated with dozens of social organizations and humanitarian, she is just happy with a brief introduction.

Chanakya says a simple person does not boast about himself and herself because the person believes that people themselves understand who he or she may be.

Although she is chosen as a mayor candidate for Kathmandu Metropolitan City by Nepali Congress, her reaction is simple and humble. She has not used any words to hurt her political opponents and rival. This is a peculiar quality of Sirjana Singh. She is not a reactive politician and this is a rare quality in current politics. With a very little debate in the meeting, Sirjana Singh's name is chosen unanimously.

Her response and reaction are understandable. Till yesterday, she was one of the candidates and others have the right to comment on her. Now, she is a candidate for the Nepali Congress and she needs support from all factions and groups.

Winning the mayoral position in Kathmandu Metropolitan is politically very important for Nepali Congress and this victory gives a big message to Nepali Congress in the forthcoming two elections.

For voters, Sirjana Singh as a new face also has a lot of reason to rejoice. Not holding any elected political position, Singh is the right choice. However, Singh has to woo young congress leaders like Gagan Thapa and Koirala led by Dr. Shekhar Koirala to unite the party.

Nepali Congress leader late Krishna Prasad Bhattarai often projected that Sirjana Singh would be a good manager for the political party showing her performance as a good house manager of Ganesh Man Singh. Whenever late Bhattarai visited Ganeshman Singh’s house, he often had a word for her. 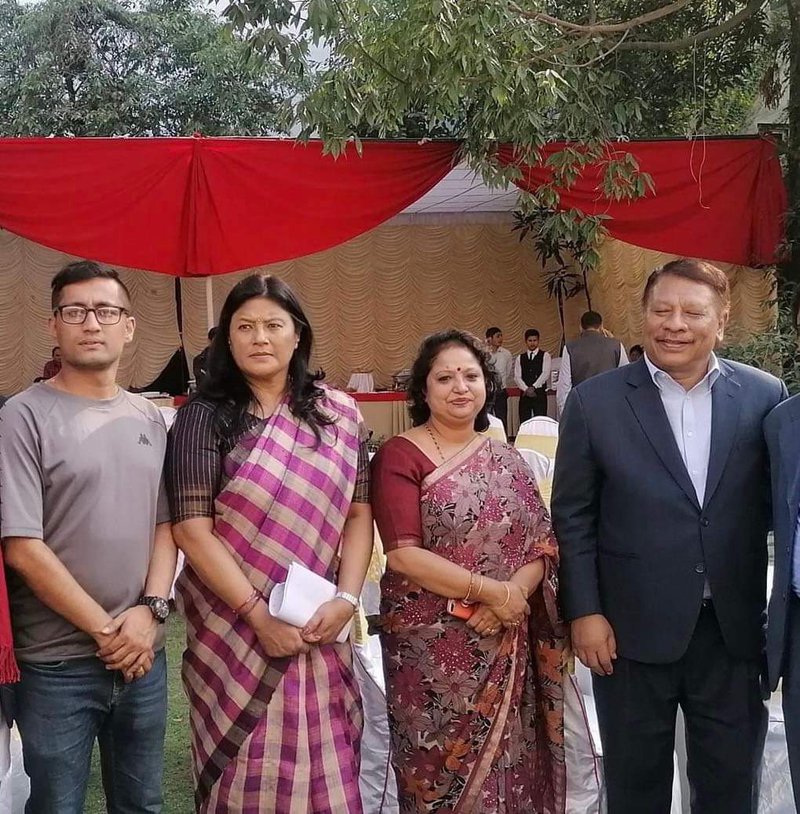 Although the name of Sirjana Singh remains familiar with the ranks and files of the Nepali Congress, her name appears in national headlines after the ruling coalition has decided to field the candidacy of Nepali Congress (NC) leader Sirjana Singh for the post of Mayor of Kathmandu Metropolitan City (KMC).

Although an agreement has been reached to make her the candidate for the post of mayor of Kathmandu Metropolitan City, a formal announcement is yet to be made, said a source.

The Central Parliamentary Committee selects candidates from the names recommended by the Metropolis Working Committee. Singh, who has not been active in politics for a long time, is said to be interested in the position of mayor.

Actively taking part in all the political moments launched by Nepali Congress since 2033 to establish an open, liberal democratic system in Nepal, Sirjana Singh has bit modified their role after her marriage.

She had to take the burden of raring children, managing the house and the politics of the family while all family members were sent to prison.

As an eyewitness of all the political struggles of Nepal, Sirjana Singh knows ins and outs of Nepali politics and political players. However, she has dedicated her entire time to a rare family and manages the house of Nepal’s renowned political family.

Whether in the national referendum of 2036 or the United People’s Moment of 2046 and 2062-063, Sirjana Singh took part actively. From her teen, Singh has been active in politics. However, her role had changed little after her marriage.

Carrier In Politics and Social Work

Along with working in politics, she has been active in social work and humanitarian work. During the Covid-19 pandemic and the great earthquake in 2015, Sirjana Singh established her name in the localities of Kathmandu.

Her name was widely circulated recently following the decision of the Nepal Women Association Kathmandu District recommending her name for the post of mayor of Kathmandu. 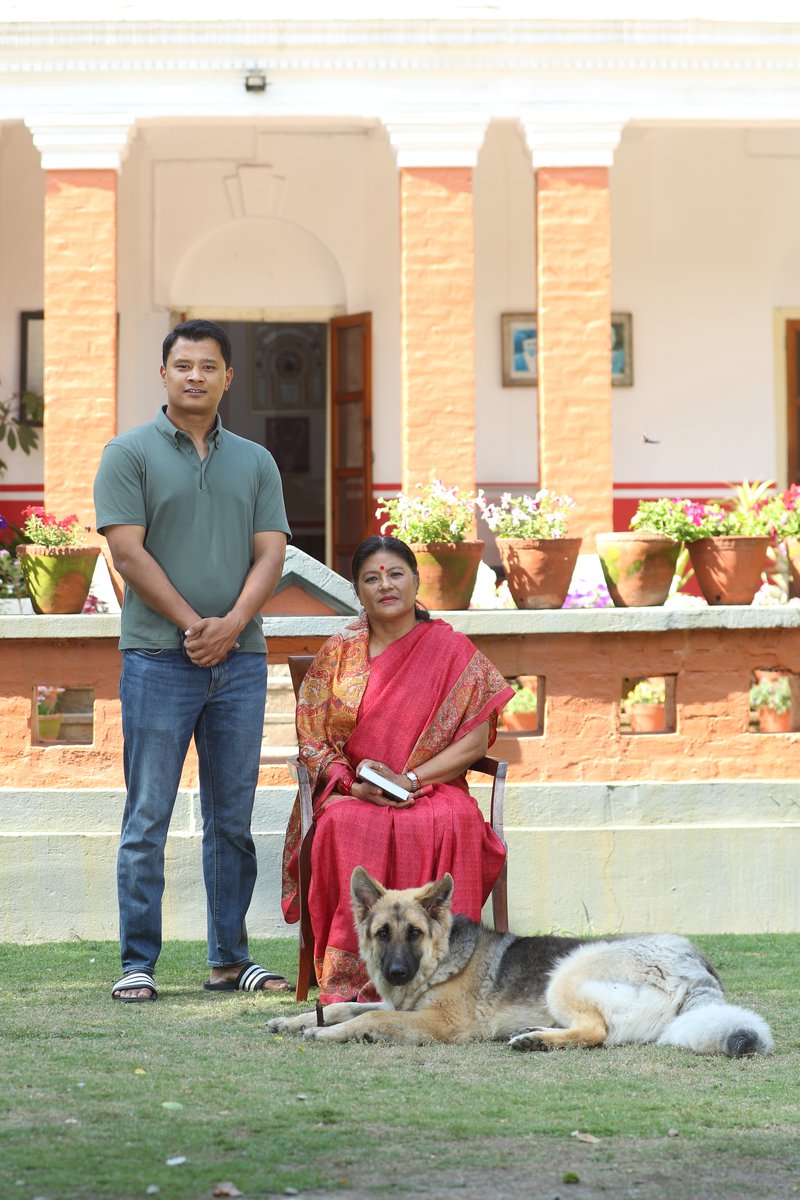 Born and growing up in Gorkha District in a family of liberal democrats, Sirjana was active in student politics through Nepal Student Union when she married the son of late Ganesh Man Singh in 2042, a most difficult time in the history of Nepali Congress. She was born in 2019, Bhadra.

Completed B.Com in 2041 from Shanker Dev Campus and certificate in Nursing from Mahabaudhha Nursing Campus, She took a member of Nepali Congress in 2033 at the age of 14.

Singh, who was secretary of Nepal Student Union Mahabaudha Nursing Campus (2035-2038), actively took part in the referendum of 1979 campaign in favor of multiparty democracy as a member of then disband Nepali Congress.

Furthermore, she defeated Pampha Bhusal in the student union elections in 2042 for the post of treasurer of Shanker Dev Campus. She was sent to Hanuman Dhoka for prison in 2037 actively taking part in collecting donations for the treatment of B.P Koirala.

She also worked as a member of the Nepal Student Union Dang Convention in 2037. Sirjana Singh proves not only a successful political activist, mother, daughter and daughter-in-law but she also has also been playing an active role as a humanitarian worker in the national disasters of earthquake 2015 and Covid-19.

She supported rescue and relief work in earthquakes as an active worker. Similarly, she helped people during the Covid-19 pandemic taking relief parts. Sirjana Singh worked actively as a member of the Nepal Red Cross Society Kathmandu District and Jaycees. She also served as a board of directors of JP School and Radha Krishna Temple Bhimsen Sthan.

Despite concentrating her energy and dedication to the home, the humble and gentle Sirjana Singh takes part in all political moments spent her valuable time as a political prisoner with her family.

Although some Nepali Congress stalwarts from Kathmandu oppose her nominations personally, no one can question her integrity and ideological commitments.

It is natural in a democratic party to have differences of opinion. Given her contributions and role in politics and her skills in management, Sirjana Singh can make a difference in managing Kathmandu City. Thus, she is a deserving candidate to lead KMC. Sirjana Singh is destined for politics, she takes an interest to restart her carrier just recently. She was first appointed to Nepali Congress in her teenage in her early days.

As she is nominated for mayoral candidate, her foremost priority will be to focus on the agenda. Frustrated by populist words and mismanagement or urbanization of Kathmandu, Singh has to present her workable agenda to the public. 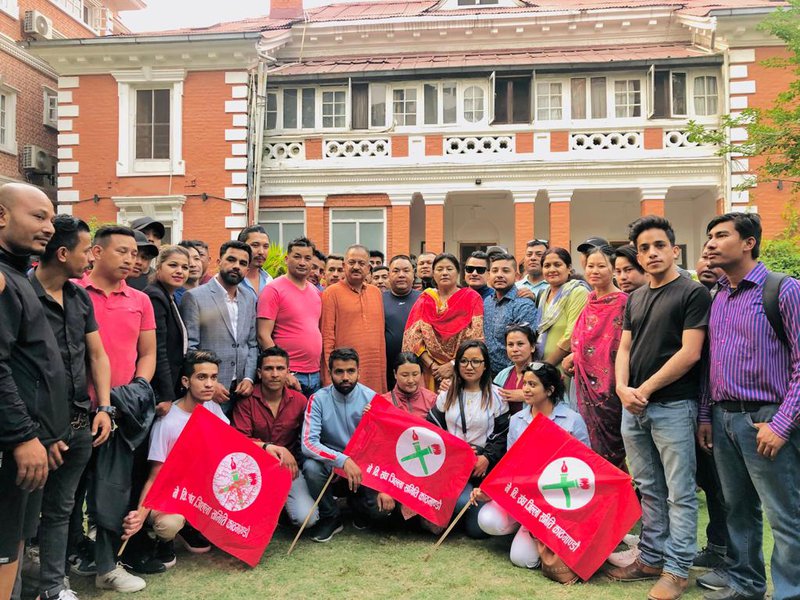 Another challenge for her is to bring all of his rivals and friends together unitedly. As a humble lady, she can do it. Whatever her political background may be, Nepali Congress leaders have put faith in her as a candidate to win the elections. 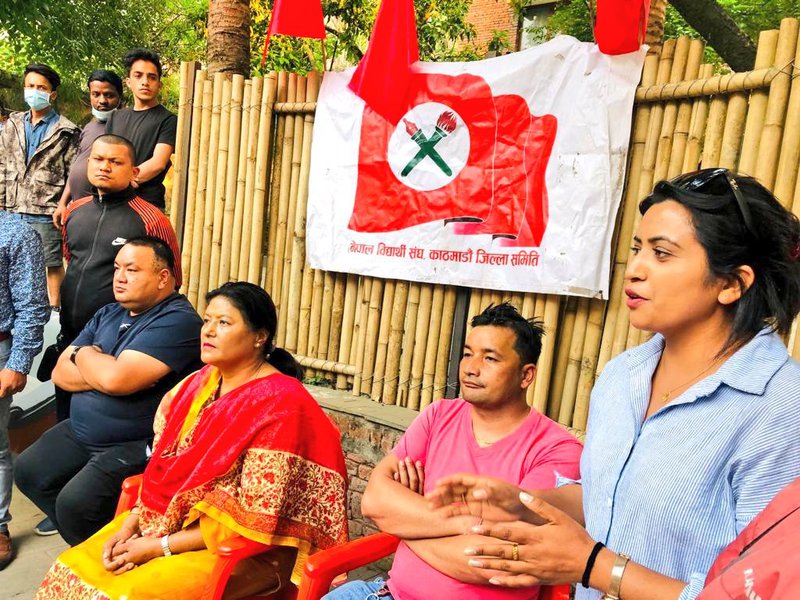 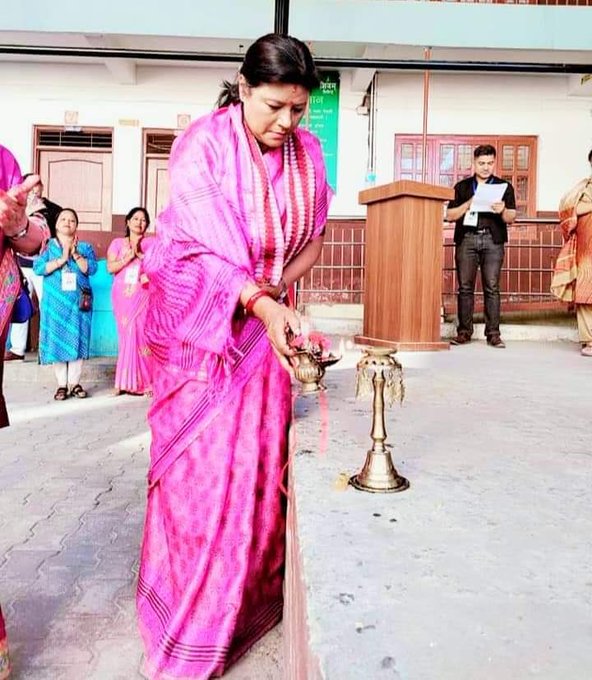