May Day 2022: Nepalese Labor Organizations Celebrated May 1 As Labor Day

May Day 2022: Nepalese Labor Organizations Celebrated May 1 As Labor Day 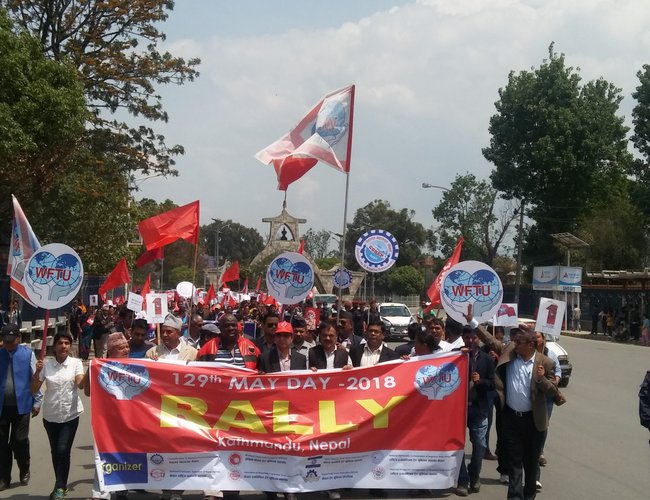 May Day honors and celebrates the accomplishments and contributions of laborer's and workers. In Nepal, the celebration of May day with the public holiday started following the restoration of democracy in 1990. All the trade union organizations holds rally and other function. This is special day for communist parties and they celebrate the day with slogans like liberate the labor, call unity for all the workers from the world. Divided in several factions, communist parties hold the rally on their own way.

This day was observed as a national holiday in many nations including Nepal. Various events are held to remind people of labor rights. To raise awareness of labour rights, messages are also conveyed through various channels. More than 80 countries, including Nepal, observe this day. May Day is also considered Majdoor divas in Nepal.

May Day honors and celebrates the accomplishments and contributions of labourers and workers. This day is dedicated to the working class and encourages them to be conscious of their rights. It is also known as Labour Day or the International Workers' Day.

May day is observed every year on May 1. It's observed not only in India but also in nations such as Cuba and China. The major goal is to acknowledge the immense hard work put in by the working class, to educate them about their rights, and to protect them from being exploited.

Workers must be aware of the opportunities available to them for their welfare and progress.

May Day traces its origin to the labour union movement in the United States in the 19th century. The Marxist International Socialist Congress adopted a resolution in 1889 stating that employees should not be forced to work for more than eight hours a day. Following that, it became an annual event.

It was declared for the workers in Paris and France to dedicate May 1, every year, as the ‘Workers Day of International Unity and Solidarity'.

In 1884, the American Federation of Organized Trades and Labor Unions called for an eight-hour workday. This led to a general strike and the Haymarket (Chicago) Riot, which finally led to the implementation of the eight-hour workday regulation in many countries throughout the world.