Europe Day 2022: Russian Aggression On Ukraine Has Greatly Threaten The Stability And Peace In Europe

Europe Day 2022: Russian Aggression On Ukraine Has Greatly Threaten The Stability And Peace In Europe 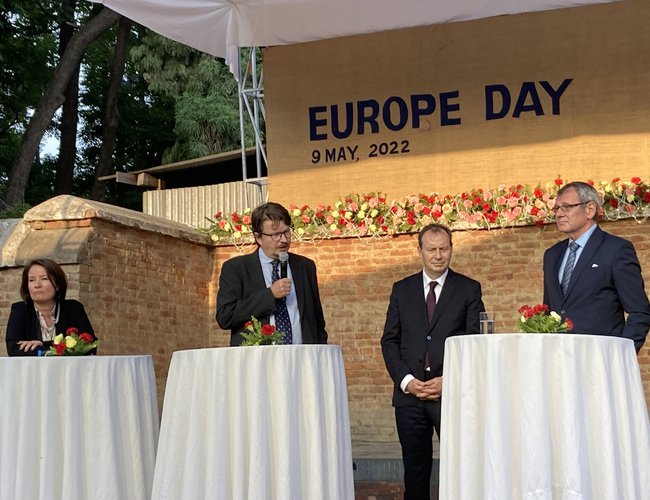 The EU Ambassador to Nepal and four other ambassadors from the EU member states have condemned the Russian aggression on Ukraine and said that those responsible for the loss of life and human suffering in Ukraine will be held accountable in a joint op-ed released on the occasion of Europe Day today (May 9). “Russia’s aggression on Ukraine gravely threatens peace and stability in Europe and the whole international peace order,” they have said.

The ambassadors have also said that the EU will work together with Nepal to defend the multilateral order. “The EU, alongside partners such as Nepal, will continue to defend a multilateral order, based on common objectives and international law,” they have stated in the article.

Full text of the article:

War has returned to Europe. Almost thirty years after the Yugoslav wars, civil defense sirens again went off in the heart of a European capital.

We condemn Russia’s military aggression against Ukraine. By its unprovoked and unjustified military actions, Russia is grossly violating international law, and international humanitarian law, undermining European and global security and stability. The international community has—notably on three occasions so far through the UN General Assembly—sent clear messages rejecting an invasion that contradicts the core principles of international coexistence as reflected in the UN Charter itself: The equal sovereignty of states, the peaceful solution of conflicts and the ban on the use of force in international relations.

We deplore the loss of life and human suffering. Those responsible will be held accountable for this.

In this context, we welcome and endorse the Commission of Inquiry set up by the UNHRC. We also welcome and fully support the investigation launched by the International Criminal Court’s Prosecutor and we keep recalling the order by the International Court of Justice of March 16 for Russia to withdraw all forces and military equipment from the entire territory of Ukraine immediately and unconditionally.

The EU stands firmly by Ukraine and its people.

This is a moment of truth for Europe and the world. This is a clash between the rule of law and the rule of the gun, between democracies and autocracies, between a rules-based order and a world of naked aggression.

What is at stake today is the very core of the international world order based on the charter of the United Nations.

The purposes of the United Nations Organization, agreed in 1945, were to save succeeding generations from the scourge of war, to reaffirm faith in fundamental human rights, in the dignity and worth of the human person, in the equal rights of men and women and of nations large and small to promote social progress and better standards of life in larger freedom. Peace, friendly relations and human progress are the three pillars of our common legacy, the legacy of the Second World War.

Ukraine is an important producer of agricultural products, including the world’s fifth-largest exporter of wheat. However, the shelling and the bombing make it impossible for Ukrainian farmers to sow. On top of this, Russia is blocking hundreds of ships filled with wheat in the Black Sea. So the consequences will be felt worldwide.

Rising fuel prices and any negative impact on global food security are resulting from the Russian aggression and military activities on Ukrainian soil, not from EU sanctions.

However, we are very sensitized to the fact that—in addition to the dramatic consequences locally—the Russian aggression in Ukraine risks deteriorating all existing food crisis scenarios worldwide and increases the impact, especially on the most vulnerable groups in our partner countries. In practice, the consequences of lower levels of global crops production, also due to reduced fertilization rates, imply higher price levels for grains and oilseeds and higher costs for consumers with repercussions on food security, especially in view of the most vulnerable, and on the income of livestock and fish farmers who would be facing higher feeding costs.

The EU, together with many partners, helps countries most in need through bilateral aid and the mobilization of the World Food Program, the World Bank and the International Monetary Fund.

Global challenges, such as climate change, economic development, the fight against pandemics, or the maintenance of international peace and security can only be solved by joining forces. This is why the EU, alongside partners such as Nepal, will continue to defend a multilateral order, based on common objectives and international law.

Once again, there is no justification for invading Ukraine. It should be noted that Russian disinformation has a track record of promoting manipulative narratives trying to justify its invasion. But imperial ambitions have no place in our 21st century.

With this war on Ukraine, the world will never be the same again. It is now, more than ever, the time for societies and alliances to come together to build our future on trust, justice and freedom. It is the moment to stand up and speak out. Might do not make right. Never did. Never will.

During the program, Finland’s Ambassador to Nepal, Pertti Anttinen also talks about the important role that young people play in the action against climate change.

Similarly, the ambassador of the European Union to Nepal Nona Deprez highlights the importance of youth and women in the development of Nepal.