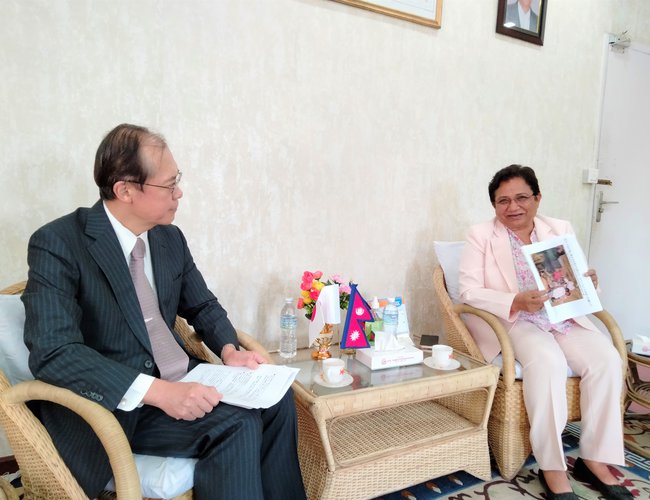 On this occasion, Ambassador Kikuta expressed his gratitude to Minister Bhushal for participating by video message in the 4th Asia-Pacific Water Summit that was held in Kumamoto City, Japan, 23-24 April 2022.

In addition, Ambassador Kikuta introduced that His Majesty the Emperor of Japan mentioned Nepal at the beginning as well as the ending of the commemorative keynote speech at the opening ceremony of the summit.

During the meeting, Ambassador Kikuta highlighted importance of relationship between Japan and Nepal and mentioned the long history of bilateral cooperation, especially in the energy sector such as Kulekhani Hydropower Project form 1970s.

Ambassador Kikuta also stated that the Government of Japan recently revised “Country Development Cooperation Policy for Nepal” and Japan would continue to support Nepal’s national achievement based on the major target of the Policy, “Assistance for a balanced and sustainable economic growth, aiming at Nepal’s graduation from the Least Developed Countries status”.

Ambassador Kikuta indicated that Japan would continue to cooperate in areas such as social and economic infrastructure development including energy and water sector, human resource development, disaster prevention, and poverty reduction in line with the Policy.

Ambassador Kikuta and Minister Bhushal shared the view to continue to further cooperate for the socio-economic development of Nepal and enhancement of the relationship between the two countries.

The EU And Nepal Hold Their 14th Joint Commission By NEW SPOTLIGHT ONLINE 12 hours, 22 minutes ago