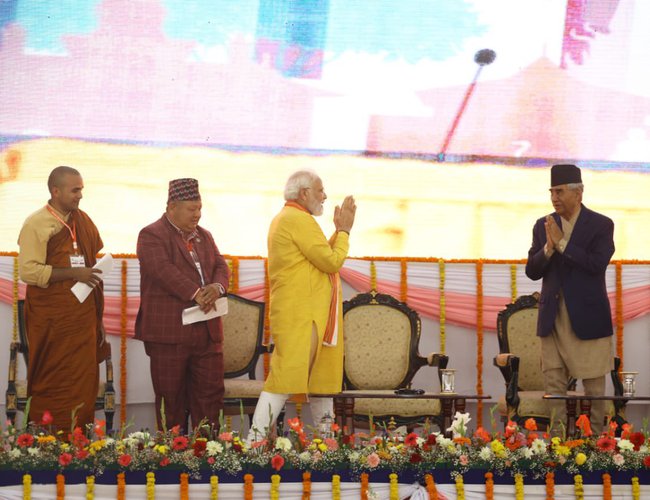 The shared history and legacy of Buddhism bind Nepal and India together as much as the predominantly followed Hindu religion by the people of both countries. Keeping this in view, at the invitation of his Nepali counterpart, Indian Prime Minister Narendra Modi visited Lumbini – the birthplace of Lord Buddha, on the day which coincides with the auspicious occasion of Buddha Purnima.

The Indian Prime Minister visited the Mayadevi temple and offered prayers and lit lamps near the Ashoka Pillar adjacent to the temple along with Prime Minister Deuba. The Pillar, which was erected by Emperor Ashoka in 249 B.C., bears the first epigraphic evidence of Lumbini being the birthplace of Lord Buddha.

During the visit, Prime Minister Modi and Prime Minister Deuba laid the foundation stone for a Buddhist monastery, being built with Indian assistance, in Lumbini. Lumbini is the birthplace of Siddhartha Gautama, the early name of Lord Buddha, where according to Buddhist tradition, Queen Mahamayadevi gave birth to Siddhartha Gautama. The place is seen with reverence equally in both countries and is an important place of pilgrimage for the followers of Buddha from all across the world.

As an expression of India’s interest in cooperation with Nepal for human resource development in the country, a very important agreement was signed between the Kathmandu University and the Indian Institute of Technology, Madras for a joint degree programme at the Master’s level.

The Indian Prime Minister has always evinced interest in places of pilgrimage in Nepal, including the Buddhist sites. India's 'Neighbourhood First', and 'Look East' policy is well reflected in it as a tool of cultural diplomacy in the form of soft power. During his earlier trips to Nepal, he visited the heritage sites of Janakpur and Muktinath. He has often highlighted the Beti-Roti (kinship and human exchanges including employment) relationship as a binding factor between the two countries.

Lumbini has a number of ancient temples, including the Mayadevi Temple and various new temples, funded by Buddhist organisations from different countries. The reason for choosing Lumbini for building a Buddhist Bihar is not far to seek. Since followers of Buddhism from India and across the world revere the place and make it a point to visit Lumbini at least once in their lifetime along with Bodha Gaya and Sarnath in India where Lord Buddha attained enlightenment and delivered his first sermon respectively, a Buddhist Bihar would facilitate the pilgrims.

Buddhism is a popular religion in some South-East Asian countries, where it had flourished having gone from Nepal and India. Lumbini’s importance could be understood by the fact that it was made a World Heritage Site by UNESCO in 1997. In the Indian subcontinent, Lord Buddha is revered as “Mahatma” (great soul) and parents inspire their children to imbibe his 'Astang Marg' or the eightfold path to live a wholesome, moral and ethical life.

According to Buddhist traditions, in the times of Buddha, Lumbini was situated in the east of Kapilavastu and south-west of Devadaha of Shakya, an oligarchic republic headed by Suddhodan, father of Siddharth. The place came to be known as Lumbini since the discovery of an Ashok pillar in Rupandehi in 1896, a place, according to anecdotes, visited by the Indian Emperor of the Mauryan Dynasty “Ashok, the Great”, to offer obeisance to Lord Buddha.

The Indian Government is working closely with the Government of Nepal to develop the ‘Buddhist Circuit’, a route that follows in the footsteps of the Buddha from Lumbini (Nepal) to Bodh Gaya (Bihar) and to Sarnath and Kushinagar (Uttar Pradesh) in India. Given the large number of tourists visiting important Buddhist sites in Nepal and India, both the governments of Nepal and India, during bilateral talks in Lumbini agreed to construct a major infrastructure push for Buddhist Circuit. The Buddhist Circuit project was announced by the Indian Government in 2016. Since then, about Rs. 3.5 billion has been sanctioned for the project under various schemes, according to the Indian embassy in Kathmandu.

The cooperation between Nepal and India is long and time tested. The cultural bond between the two countries has remained deep and intense and the governments of the two countries support uninterrupted people-to-people contact. While a large number of Nepali workers find it convenient to work in India due to the cultural bond, Indian employers treat Nepalis as trustworthy and faithful. Indians have showered love and affection on some of the Nepali origin-matinee idols like actor Danny Denzongpa or actress Manisha Koirala and singer Udit Narayan Jha.

To facilitate people-to-people contact and promote trade and tourism, the Prime Ministers of Nepal and India recently launched a cross border railway link. Already several cross border rail links are being implemented by the two countries – Jayanagar-Kurtha-Bijalpura-Bardibas, Jogbani-Biratnagar and Raxaul-Kathmandu. The history, geography and culture of both countries are entwined and they are natural development partners as well.

Nepal and India plan to work together in the development of infrastructure and power projects, especially renewable energy and hydropower development. There is a general view in India that an economically prosperous and politically stable Nepal is in the overall interest of all the South Asian countries, particularly India. (RSS)

Bhandary is the News Coordinator of National News Agency (RSS)