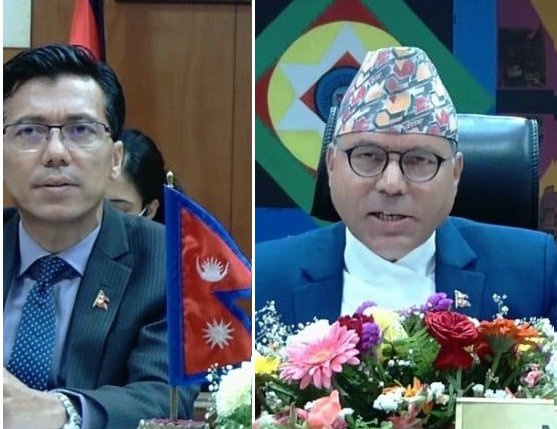 Foreign Secretary Bharat Raj Paudyal thanked the Chinese side for their decision to resume the regular passenger flights between the two countries in Kathmandu-Kunming and Kathmandu-Chengdu sectors. He also thanked the Chinese side for the preparation of the return of Nepali students to China and requested to facilitate the return of Nepali business people and their families to China.

Addressing the 14th meeting of the Nepal-China Diplomatic Consultation Mechanism held virtually on May 25, Foreign Secretary Paudyal thanked the Chinese Government for the generous support of life-saving vaccines and medical supplies to Nepal during the difficult time of the COVID-19 pandemic.

Foreign Secretary Bharat Raj Paudyal and Assistant Minister of Foreign Affairs of the People’s Republic of China Wu Jianghao led their respective delegations to the meeting. 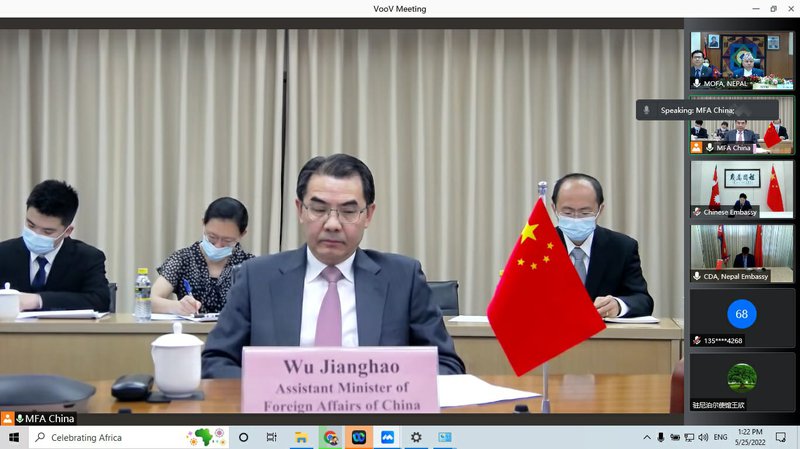 On the occasion, the two sides took stock of Nepal-China relations and exchanged views on further promoting bilateral relations and cooperation for mutual benefit, according to the press release issued by the Ministry of Foreign Affairs.

Assistant Minister Wu assured the Foreign Secretary of China’s support for the improvement of health infrastructures as well as for the capacity building of medical personnel of Nepal.

During the meeting, the two sides underscored the importance of exchange of high-level visits and stressed the need for timely implementation of the agreements and understandings reached between the two countries.

The two sides also agreed to activate bilateral mechanisms to enhance cooperation and partnership in the aftermath of the COVID-19 pandemic. They also emphasized the need for timely completion of China-assisted projects.

Both sides underlined the need to enhance the level of support for improving the livelihood of people residing in bordering districts in the Northern Himalayan region of Nepal, according to the press release.

They also exchanged views on continuing cooperation in various regional and multilateral forums on matters of mutual interests.

The Nepali delegation was composed of senior officials of various Ministries of the Government of Nepal and the Chargé d’affaires at the Embassy of Nepal in Beijing. Likewise, the Chinese delegation comprised the high-ranking officials of the Ministry of Foreign Affairs of China and the Ambassador of China to Nepal, said the Ministry of Foreign Affairs.