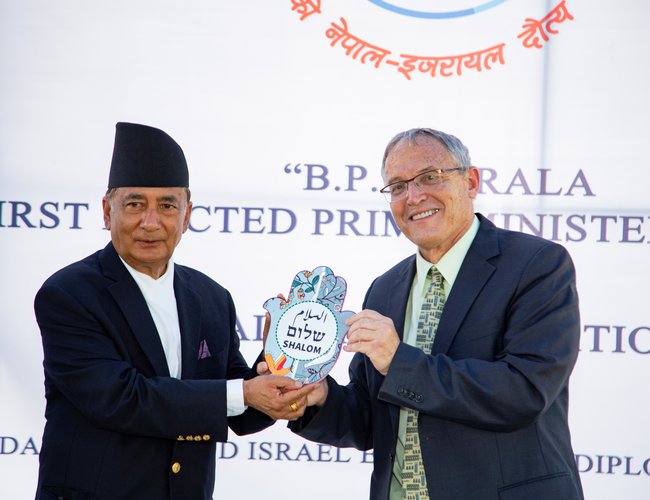 The Embassy of Israel and B.P. Museum Committee jointly organized“Interaction Program: B.P. Koirala and Nepal-Israel Relations” at The B.P. Memorial Museum, Sundarijal to celebrate 62 years of diplomatic relations between Nepal and Israel.

The program was held amidst the presence of former ministers, high-ranked Nepali government officials, diplomats, politicians, media fraternity and friends of Israel. Gyanendra Bahadur Karki, Minister for Communication and Information Technology, graced the event as the chief guest. 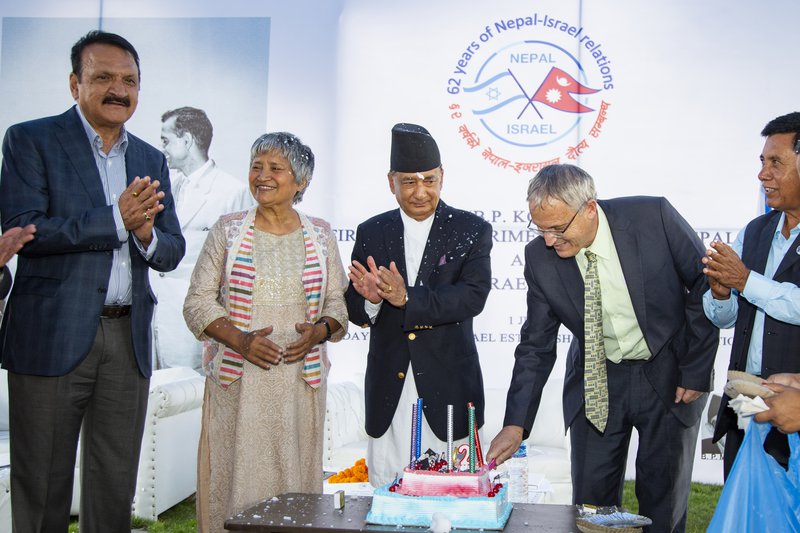 The diplomatic relations between the nations were established at the initiation of the two great leaders and Prime Ministers of their respective countries, B.P. Koirala and David Ben Gurion on 1 June 1960.

The Embassy of Israel highly values the contribution of B.P. Koirala as a great leader; Israel will always remember that Nepal was the first and the only country in South Asia to keep relations with Israel at the time. Since the establishment of ties, the two countries have been enjoying deep friendship, demonstrated by many high-level visits, and mutually benefitting cooperation in various fields including agriculture, education, health, entrepreneurship, etc.

Marking this historic occasion, Minister Gyanendra Bahadur Karki said, “I would like to extend my sincere congratulations on the 62nd anniversary of the establishment of diplomatic relations between our two countries. We express our unwavering commitment to working together to further strengthen and consolidate this ties between our two countries.” He further said that Nepal is inspired and wants to be benefitted by the cutting-edge technology of Israel. 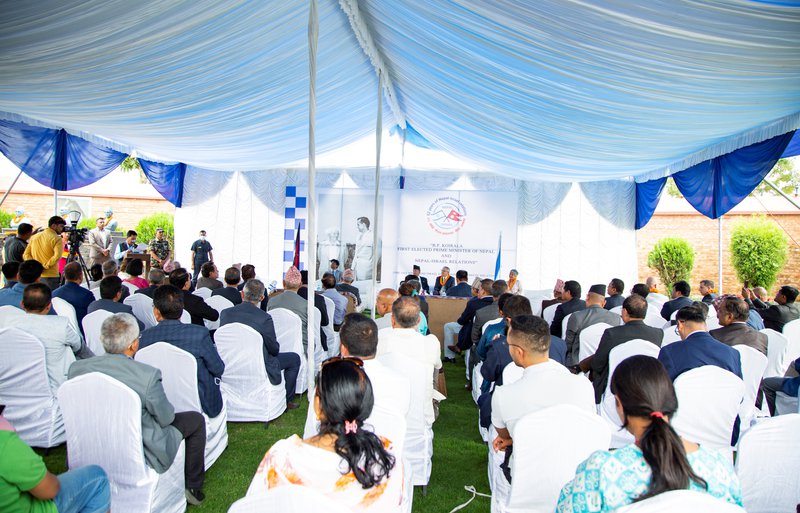 Minister Karki said so while addressing a function organized to mark the 62 years of the establishment of the diplomatic relation between the two nations.

"Cooperation between Nepal and Israel on human resource development, education, agriculture technology and employment have enhanced the relations to flourish and consolidate," said the Communication Minister at the program held at BP Museum at Sundarijal.

Minister Karki, also the government spokesperson, pointed out the need for a direct flight between Israel and Nepal to promote Nepal's tourism.

He expressed hope that the establishment of the Agriculture Center of Excellence in all seven provinces of Nepal by Israel will further add value to the relations.

The Communication Minister lauded the way the government of Israel dispatched a rescue team and relief material to Nepal in the immediate aftermath of the Great Earth Quake in Nepal in April 2015.

Speaking at the event,. Hanan Goder, Ambassador of Israel said, “Relations between two countries have two dimensions: the bilateral one and the multilateral one. I gladly note that on bilateral issues, the relations are excellent.”

Pradeep Kumar Gyawali, Former Foreign Minister talked about multilateral relations between Nepal and Israel. He said that Nepal will always support Israel’s freedom and sovereignty. Nepal will positively consider sensitive matters of Israel and will be further supportive, positive and collaborative on those matters of concern which Israel is expecting to get support from Nepal.

On the same issue. Prakash Sharan Mahat, Former Foreign Minister said that Nepal will always stand with Israel when it comes to Israel’s security, sovereignty and integrity. If Israel thinks that Nepal stands otherwise and has any questions about our support, we will think about it seriously and agree to discuss it.

Former Ambassador to Israel, Dr. Anjan Shakya said that the MOU has been signed with Israel to establish 7 Excellence Centers in 7 Provinces of Nepal in the agriculture sector. She further stated, “We were successful in establishing the Israel-Nepal Chamber of Commerce in Israel. Many business personalities of Israel are interested to invest in Nepal.”

Talking about agriculture, Khem Bahadur Pathak said that 3100 young Nepali students have participated in Learn and Earn program and all of them have returned to Nepal with modern Israeli technology, money and a hardworking professional attitude. He emphasized the importance of modern agro-technology for agriculture and how Nepali returnees are doing extremely well in agriculture in Nepal.

Speaking at the program,. Santosh Shah, President of Today’s Youth Asia said, “Taking into consideration the 1 year long Abraham Accords, Nepal should immediately make corrective changes in the voting pattern at UNGA from being against Israel to becoming positive or staying neutral as a sign of bilateral cooperation in true sense.”

The gallery of an exhibition on flashbacks of Nepal-Israel relations was also displayed, portraying historical cooperation between the two countries.

The speakers highlighted about Nepal-Israel relations, B.P. and his role in democracy in Nepal, existing cooperation and the possibilities of future collaborations between the two countries. The interaction provided an opportunity to commend the existing bilateral ties and invited us to reflect on the possibilities of improving relations at the multilateral level.

World AIDS Day 2022: The AIDS Response Is In Danger By NEW SPOTLIGHT ONLINE 3 days, 4 hours ago