Some local, both former and current politicians, have promised that they would make Nepal into either Singapore or Switzerland in one’s lifetime. Well seventy plus years have relapsed since the dawn of Democracy in this land of ours. 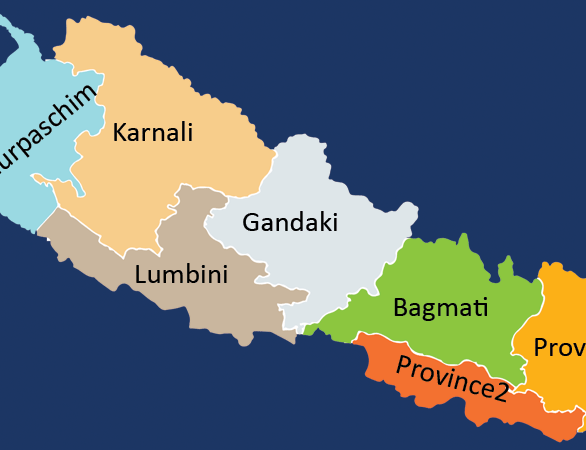 Sometime back, Indian Congress leader Rajiv Gandhi in an exchange of words with a certain Siddharth Verma at Cambridge University maintained that India was a ‘Union of States’ and not a Nation! Fact of the matter is that a country can be an amalgamation of a number of self ruling units e.g. America 50 states, Canada 10 provinces and Australia 6 provinces. If we turn to Europe we see that Germany has 16 ‘Lander’, Switzerland 26 Cantons and they function well too independent units.

Some local, both former and current politicians, have promised that they would make Nepal into either Singapore or Switzerland in one’s lifetime. Well seventy plus years have relapsed since the dawn of Democracy in this land of ours. The ‘Pie in the Sky’ or Akashko Phal, as promised by our netas has not yet been felt nor experienced by us Nepalis. The most recent change i.e. to the concept of a Federal Republic is said to have taken place in 2015 with the ushering in of a new constitution under the sponsorship of European? Nordic countries.

There had been talk of decentralization at the time of monarchy in Nepal. During Panchayat days there were 14 Anchals, sub-grouped at first four, but later five Development regions. Though the concept was good it never took off simply because the central government was never willing to let go of power.

Following the institution of the present Federal System in Nepal in 2015 the reality is that it has not been able to function because the ground work – administrative, legal and financial have not yet been fully put in place, even in 2022.

Is this really so? Looking at some of the countries that we are trying to copy one sees that:

One of the reasons stated against Federalism is that it is too costly. As a comment in the FB Social Media stated that it has created many hierarchical positions in the Pradesh, which number seven and is too costly for us to maintain:

Comments appear frequently in FB on the number of VIPs created by this present exercise of ours:

N.B. I must however point out that whilst I quote these figures I cannot vouch for the validity of all that one hears and sees in this age when ‘Fake’ news is a reality of life. The number of VIPs is phenomenal and perhaps it is a great burden on our state in terms of expenditure on behalf of security, transportation facility support and even pensions.

Whilst the numbers of ministerial posts in the Pradesh governments are not rigid and are changed frequently in the effort to accommodate as many aspirants as possible. Such action is not correct. There should perhaps be the Pradesh Chief Minister and just four or five ministers e.g. 1. General Administration, 2.Health & Education, 3. Law & Order, 4. Personal & Human Rights and 5. Agriculture, Forestry & Environment. These five areas will cover all aspects of Pradesh responsibility. Decentralisation is necessary and can be brought about by proper planning rather than by copying i.e. duplicating what exists at National level.

After the term of a minister finishes, if facilities are to be provided to them, it should only be for a period equivalent to the time that they served as minister or Pradesh dignitary. Only in this way will the ever increasing expenses of government be curtailed.

Is Federalism working in Nepal? Has this costly exercise been thrust upon us? A lot of money has been spent in the local elections and more will be required for the Pradesh and Central elections in November 2022. True, the money spent has gone to Nepalis but could this amount not have been spent on national needs? Do we need so many officials doing nothing most of the time? Where are we heading? Buying of road making dozers at local levels and making ‘Andadhun Sadaks’ which become waterlogged during monsoons and not unfit for use should not be allowed. Spending the budget on cars which soon breakdown due to lack of care or maintenance or for building ‘Entry & exit concrete dwars’ at villages or towns and view tower on mountain tops is not a proper use of the budget!