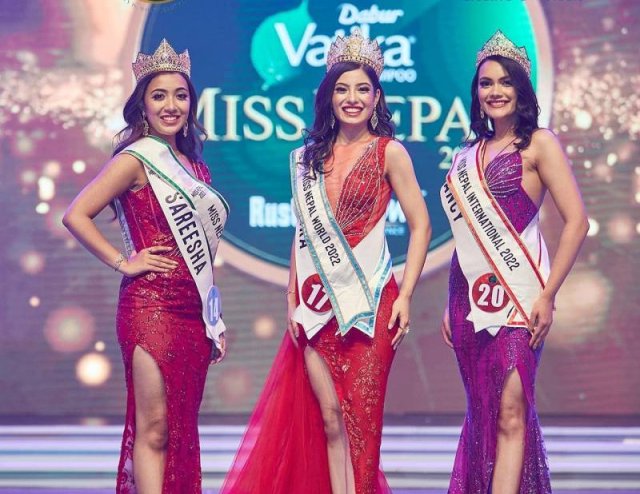 Priyanka Rani Joshi has been crowned Miss Nepal World 2022 amid a grand ceremony held at Godawari, Lalitpur. The 24-year-old from Kathmandu defeated 23 other contestants to win the coveted title in the beauty pageant. Joshi was crowned the title by Miss Nepal 2020 Namrata Shrestha.

The title winner of the 25th edition of the Hidden Treasure Miss Nepal is an entrepreneur by profession. She holds a Bachelor's degree in Journalism and English.

She wishes to set up a residential camp to care for and rehabilitate street children. The top six contestants had been asked a question, what do you think one girl can do or be an example of a fearless woman in future?

Joshi replied, “The start of 21st century did bring about the sources of positive changes for women across the globe. This started as the fight, today we stand tall. One girl is an enough power to search changes that disciples love that bring the entire world together because sublime beauty of womanhood is her parallel strength to hold the power of holding the world in her and I stand for uplifting and empowering that strength.”

The organiser had changed some criteria for Miss Nepal 2022 this year.

From this year, the minimum height of the contestants was reduced to 5’ 3” from 5’4” while age limit was increased from 26 to 27 years.

The Hidden Treasure had conducted the audition for Miss Nepal in all the seven provinces of the country.

This year, Hidden Treasure had provided nine subtitle awards to the contestants.

Likewise, Smarika Sharma won the title of Beauty with the Purpose. Out of the 24 contestants, Hidden Treasure selected the top 12 semifinalists, then top six and the final three contestants.