Saune Shankranti And Months of Srawan 2022:Religious Significance And Importance

Saune Shankranti And Months of Srawan 2022:Religious Significance And Importance 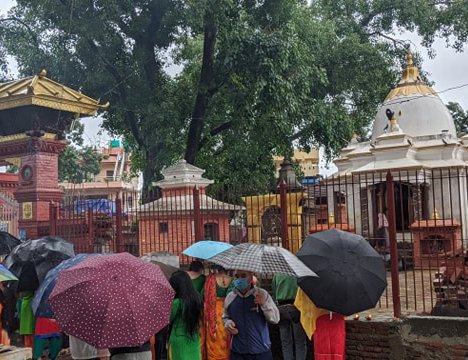 Today is the Saune Shankranti which is highly important day in Nepal. People from different walks of life celebrate it offering various pooja. Saune Sankranti, which marks the beginning of the month of Shrawan, Hindu devotees throng the Shiva temples and offer special pujas. Shiva Abhishekam (Jalabhishekam) is the main ritual on this day.

On Shrawan Sankranti, the sun enters the sign of Capricorn. During Shrawan, worshipping Lord Shiva is seen as especially auspiciousness.

According to Nepalese tradition, Shrawan is the month of cleaning and removing dirty things. Nepalese worship and beat Nonglo (large bamboo plates) to remove certain types of disease such as eczema.

Observing Mangala Gauri fast and worshipping ritually on every Tuesday of this month is thought to make the prospects of marriage and child of a woman more fortuitous.

According to the legend, Samudra Manthan (the churning of oceans) took place in the month of Shravan. During the Samudra Manthan, fourteen different types of rubies emerged and thirteen of these were distributed among the demons, leaving one type called Halahal (poison). Lord Shiva came to rescue, drank the Halahal and stored it in his throat. His throat turned blue due to the effect of the poison, earning him the name 'Neelkantha' (meaning blue throat). In order to reduce the strong effect of poison, Lord Shiva wore the crescent moon on his head. All the Gods thereafter started offering the Ganges water to Lord Shiva to reduce the effect of poison.

The Karnali Province Government has announced a public holiday on July 17th in the province on the occasion of Saune Sakranti and Deuda Festival.

The Ministry of Internal Affairs and Law of Karnali Province stated that such a decision was taken to give public holiday in all the districts of the province on the occasion of this cultural festival.

Ministry’s spokesperson Tul Khadka said all government and public offices, academic institutions as well as the banks and financial institutions in the province would get a holiday.

The government announced a public holiday for the publicity and promotion of Deuda culture with special importance in the province, according to spokesperson Khadka.

In the auspicious month of Sawan, Lord Shiva is worshipped every day and it holds a special place in Hinduism. In Sawan, which is believed to be the month of Shiva, the worshippers observe a fast every Monday.

This year, the month of Sawan will begin on 14 July and end on 12 August. During this time, special prayers will be offered to Lord Shiva and his family in temples across the country.

The month of Sawan falls in Chaturmas, and the reason for this is that Lord Vishnu stays in yoga Nidra for four months. It is said that if you offer a lot of water to Lord Shiva with a sincere heart in Sawan, it pleases him.

So, with the holy month around the corner, Tirupati astrologer Dr Krishna Kumar Bhargava talks about the beginning and end of the month of Sawan.

Based on Panchang starting of Sawan month 2022, this year the Pratipada date of Krishna Paksha of Sawan month will take place at 12:06 pm on Wednesday, July 13 and remain till 08.16 pm on the next day, Thursday, July 14.

So, as per the recognition of Udayatithi, Sawan Krishna Pratipada falls on July 14. The month of Sawan is starting from this day itself and will mark the first day of Sawan.

According to the closing calendar of Sawan month 2022, the full moon date of Shukla Paksha of Sawan month is starting from 10.38 am on Thursday, August 11. This date will be valid till 07:05 am the next day. Based on Udayatithi, Sawan Purnima is on August 12, following which, the month of Sawan will end on Friday, August 12.

In the month of Sawan, Sawan Somwar Vrat and Mangala Gauri Vrat are considered very important.

Two Shilas Left For Ayodhya From Janakpurdham By Agencies 2 days, 9 hours ago