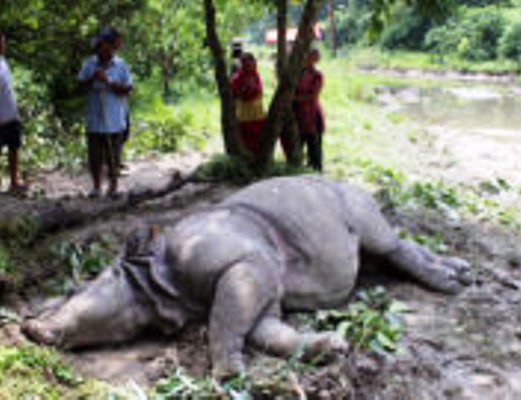 A total of 37 rhinos have died in the Chitwan National Park (CNP) and its buffer zone in the last fiscal year 2021/22.

According to the CNP, two were killed due to poaching and the remaining due to natural causes. CNP Information Officer Ganesh Prasad Timalsina said that among the two rhinos killed in poaching, the horn and hooves of one were intact while those of the next one had been taken away by poachers.

Timalsina said among the dead rhinos, 18 were male, 14 female and the gender of five could not be ascertained. Most of the rhinos died due to old age, getting stuck in the swamp, tiger attacks and falling in ditches among others.

Altogether 33 rhinos had died in 2020/21 while 44 in 2019/20, the CNP said. CNP, sprawling across 932 square meters of area, has grassland across 10,497 hectares of land. Depletion of those grasslands had also contributed to the declining number of rhinos in the CNP.

Rhino Conservation Conference Kicks Off In Chitwan By Agencies 2 days, 9 hours ago