It resulted in the signing of the Sino-Nepalese Treaty of 1792, which provided a tribute-bearing mission from Nepal to China every five years as a symbol of China’s political and economic supremacy in the region. During the first Anglo-Nepalese war of 1814, China refused to come to Nepal's aid and voluntarily ceded its dominant position in Nepal to the growing British influence in the region. 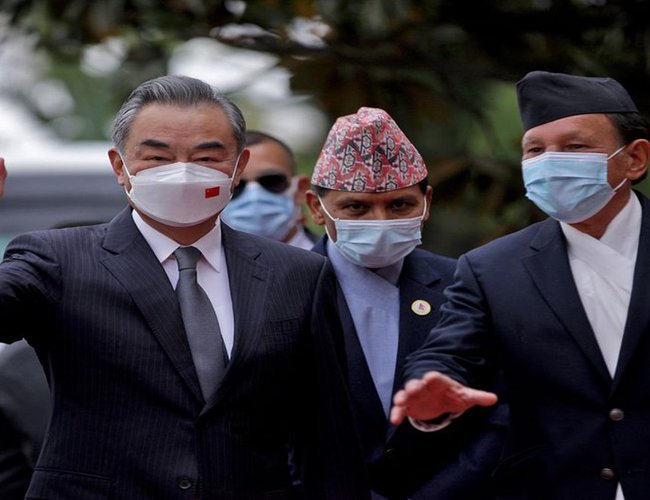 “If China succeeds in replacing India as the key economic as well as security partner for Nepal… it would have breached the Himalayan borders that separate the Indian mainland from China.” Shashank Shukla

Nepal’s relationship with China’s first recorded official engagement dates back to the middle of the seventh century, when Nepal’s armed forays into Tibet led to Chinese intervention favouring the latter. It resulted in the signing of the Sino-Nepalese Treaty of 1792, which provided a tribute-bearing mission from Nepal to China every five years as a symbol of China’s political and economic supremacy in the region.

Tibet was the focal point in their off-and-on relations for many years till 1814-16, when British India entered as another important contender for Nepali loyalties. During the first Anglo-Nepalese war of 1814, China refused to come to Nepal’s aid and voluntarily ceded its dominant position in Nepal to the growing British influence in the region.

The Chinese used to address the King of Nepal with the title of “Wang”. China seemed to use that title for the Nepalese monarch since they considered him a vassal of the Chinese Empire. The first treaty between Nepal and Tibet dates to 1789, when Tibet, defeated by Nepal, had pledged to pay an annual tribute to Nepal. In 1791, Nepal invaded Tibet again, but this resulted in a victory of the Ch’ing over Nepal in 1792, forcing Nepal to pay a continual quinquennial tribute to China. The treaty forced the Nepalese to send diplomatic missions with gifts to the Manchu Emperor every five years. This tribute was regarded differently by the Prime Minister of Nepal, Chandra Shum Shere (1863–1929), while clarifying this issue in his letters to the British Resident in Nepal, John Manners Smith. He stated that this ‘tribute’ was a simple exchange of gifts between two independent countries. “We have always regarded our relations with China as long-standing, simple, friendly, and innocent in nature. The missions from this country to China were embassies from one court to another, which were invariably treated with honour and consideration due to honoured foreign guests”.

China’s main interest in Nepal has always been led by its concerns over Tibet, which China has ruled since 1950. Beijing’s involvement with Nepal grew much more intense post the March 2008 ethnic Tibetan uprising against Chinese rule, which deeply embarrassed the Chinese Government on the eve of its 2008 Olympic Games. An estimated 25,000 Tibetans live in Nepal, but with China pushing Nepal to tighten its border with Tibet, the number of new refugees reaching Nepal has dropped to a trickle from an earlier annual figure of around 2,500. China also has increased its focus on economic ties, trade between China and Nepal has quadrupled since 2003.

Nepal, on the other hand, has always looked at either China or India, whichever it considers crucial for its survival at that moment, given its delicate land-locked position between the two Asian superpowers. Maintaining a balancing relationship with China remains Nepal’s key and critical component of its ‘China’ foreign policy.

When India gained its independence in 1947, the vacuum created in the power equation after Britain left sought to be filled by India in trying to emerge as the foremost power of South Asia. This resulted in the initiation of two binding treaties with Nepal, firstly the Indo-Nepal Treaty of Peace and Friendship of 1950, and secondly, the Trade and Transit Treaty. These treaties provided the basis for initiating bilateral relations between a newly independent India and Nepal and resulted in the articulation of the identification of too many cultural and historical similarities between the two nations, which though well-intended, created suspicion in the minds of the Nepalese politicians about India’s long-term intentions. They also felt that these treaties reminded them of their perception of their inferior status vis-à-vis India.

Subsequently, a series of events which included the Indo-Soviet Treaty of Peace, Friendship and Cooperation in 1971, the Indo-Pak War and the creation of Bangladesh, the merger of Sikkim in India in 1974 and later, India’s unofficial support to the political opposition in Nepal and finally the start of the Naxalite movement along the Indo-Nepal border,” in the areas of Siliguri and Naxalbari in West Bengal created apprehension in the mind of the King of Nepal and his coterie of advisors, who felt that the spillover of this Naxalite movement might result in a more significant problem within Nepal, given the wide disparity in the living standards amongst the people of Nepal. Later, India’s nuclear explosion in 1974 and her decision to emerge as a declared nuclear power added to Nepal’s discomfiture and fuelled her insecurity about the impact of India’s growing stature as a regional power and her intent toward Nepal.

It was in this context that Nepal restarted and reshaped its ties with China as a possible counterweight to India. Certain international events too influenced this decision to go back to China; most important was the defeat of India in the Indo- China border war in 1962 and the beginning of aggressive Chinese posturing concerning the continual disputed border claims with India. This event caused an alarm within the Nepali power and political structures, who felt that China would do the same to them sooner rather than later if not influenced now. Further, this insecurity of Nepal also propelled China to start thinking of consolidating her presence within Nepal. It felt that it would be reasonably easy to prop up the Nepali power structure against India if and when the need arose, given Nepal’s insecurity and apprehensions.

Nepal’s relationship with China is need-based and practical. It lacks the warmth and depth of the India-Nepal relations, no matter how flawed it probably is. It is evident from the past that China and Nepal are prone to distancing whenever the circumstances change, and the power situation demands. On the other hand, India and Nepal share a deep and enduring relationship cemented by shared history and culture.

(This is Part 1 of the article. The author, a veteran soldier, is a second-generation officer of the 11th Gorkha Rifles and has served in the Indian Army for almost 40 years. He was the former Director General of Assam Rifles and was later appointed the Chairman of the Cease Fire Monitoring Group located in Kohima where he was chartered to bring the various insurgent groups to accept an ongoing Ceasefire with the GOI. Views expressed are personal and do not reflect the official position or policy of Financial Express Online.) Source :