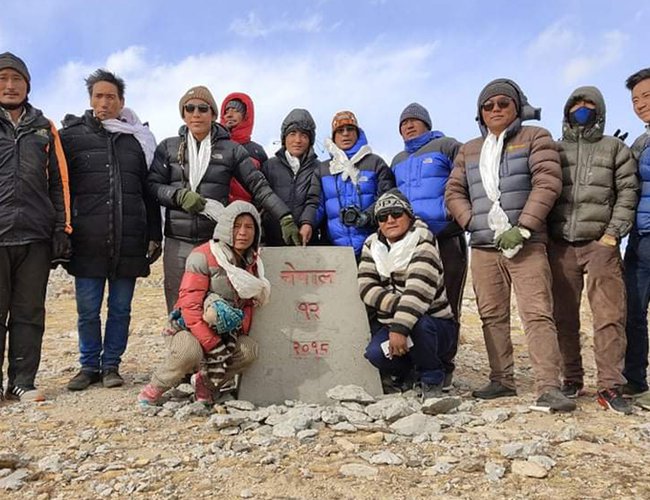 A Nepali civic group's recent claim of "China's encroachment" of land is a baseless allegation and part of a smear campaign which pro-Western or pro-Indian political forces are believed to have been staging. The civic group has been employing sustained, radical strategies in its repeated attacks against China, while turning a blind eye to India's encroachment on the group's base hub located in the Nepal-India border area, according to a source familiar with the matter.

A delegation of the Nepali civic group, Rastriya Ekata Abhiyan, has submitted a memorandum to Nepal's Minister of Land Management, Cooperatives and Poverty Alleviation Shashi Shrestha, accusing China of "erecting a fence" at the border area in Northern Gorkha and demanding that the country reclaim territory "occupied by China," Indian media Hindustan Times reported on Wednesday.

Rastriya Ekta Abhiyan has been continuously conducting various campaigns against the so-called Chinese encroachment. As early as in September 2021, the group held demonstrations in a radical and insulting way against China over the alleged "encroachment of Nepali land in Humla district," local media reported.

The group also handed a memorandum in March to the European Union aiming to draw its attention to allegation.

The slander over "China's encroachment of Nepal's land" has been raised since 2020, with some Western reports, citing unnamed Nepali politicians, groundlessly alleged that Chinese military had crossed the China-Nepal border into the district of Humla and moved the stone pillars used to demarcate the boundary into Nepali territory for China to construct military bases. But the allegation has been repeatedly refuted by Chinese Foreign Ministry as well as the Nepali Ministry of Agriculture and Ministry of Foreign Affairs.

Chinese Foreign Ministry spokesperson Wang Wenbing criticized the groundless reports as "fake news without any factual basis, and are complete rumors" in a press conference on November 3, 2020.

China always respects Nepal's sovereignty and territorial integrity. As early as the 1960s, the two countries settled the boundary issue through friendly consultation without any dispute. Some media and organizations have repeatedly hyped up the so-called "China's occupation of Nepal's territory," and each time it was proved groundless. It also reminds us that there are always forces trying to undermine China-Nepal friendship and drive a wedge between the two countries, the Chinese Embassy in Nepal commented on the issue in November 2020.

A Nepali investigator who visited the border in 2020 previously confirmed to the Global Times that the allegations of so-called encroaching in Humla are baseless, and the border pillars were not moved

Nepal also sent a government inspection team again in September 2021 following a new round of accusations by some local anti-China, pro-India political forces that alleged China was encroaching into Nepali territory.

The organization intensified its protests after a groundless BBC piece, citing a "government report leaked to the BBC", accused China of "encroaching into Nepal" in February.

The organization, headed by Binay Yadav, is a group that takes a Hindu Kingdom as one of its core themes. The group has been carrying out anti-China activities in a more radical way, Prem Sagar, president of the Kathmandu-based Nepal-China Mutual Cooperation Society, told the Global Times on Thursday. Sagar has closely followed the civic group.

The group was active in supporting the US-promoted Millennium Challenge Corporation (MCC) pact, which faced a huge public backlash in Nepal in March because it contains provisions that had seriously infringed upon Nepal's sovereignty and is widely regarded as a geopolitical pawn of Washington's "Indo-Pacific Strategy."

"The group, which is suspected of targeting China with backing from political forces to damage bilateral relations, has become part of the smear campaign against China, as have some Western media outlets and institutions. If the group's purpose is really to protect Nepal's national interests, why does it not seem to have uttered a single word about India's factual encroachment on Nepal in Nepal's Terai districts bordering India where the group's main operation base is," said Sagar. "With this kind of deafening silence, it's not difficult to conclude that the group is favored by pro-Western and pro-India forces."

The author is a reporter with the Global Times.