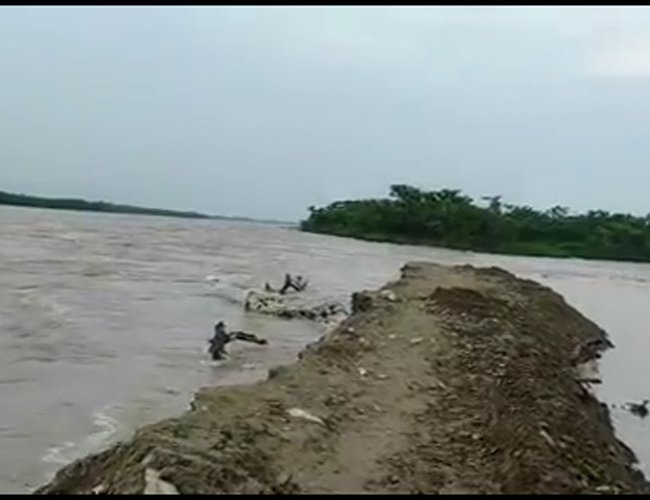 The flood-fed Saptakoshi River has eroded human settlements in Belaka municipality-1, 2, 8, and 9 of Udayapur.

Home Minister Balkrishna Khand has directed all authorities concerned to step up the transfer, rescue, and relief efforts in the flood-ravaged area after the swollen Saptakoshi river started eroding human settlements.

As informed the rising water level of the river has already eroded almost 50 meters of the human settlement.

The Home Ministry sources informed that the citizens residing in the erosion-prone areas are being shifted to the secured areas.

Home Minister Khand has also consulted Minister for Foreign Affairs Dr. Narayan Khadka about the rehabilitation of flood-displaced people, their temporary settlement, and relief arrangement. Minister Khand consulted with Foreign Minister Dr. Khadka as the latter is also from the river-eroded Udayapur district.

The erosion has invariably affected the residents of Dumikot and Lahurekhonch. As many as 2,400 households are projected to be affected by the erosion.

Security officials said the river has also taken away the structures that were constructed to check the erosion some days ago following the rise in water current. (RSS)

Earthquake In Doti: Nepal Army Is In Rescue Operation, 200 Aftershocks So far By NEW SPOTLIGHT ONLINE 3 weeks ago