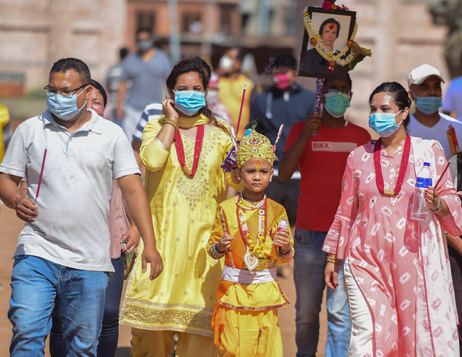 Gai Jatra is a festival of dancing, singing, mirth and laughter. The festival of cow is celebrated in the Kathmandu Valley to commemorate the death of loved ones. As part of the festival family members of the deceased of the past year send people mostly children. dressed as cows to parade on the streets.The festival usually falls in July or August.This year Gaijatra is on August 12.

The festival will be performed after 11 am after ending Janai Purnima and start of Pratipada.

Gai Jatra is a time to remember lost ones and also to ease the pain. The word "Gai" mans cow in English. Cow is regarded as the goddess of wealth in the Hindu religion. Sharing of sorrow and taking the comfort in knowing that their lost ones are safe is the true reason for celebrating this festival.

The day is also marked with a gay parade along with many people dressed is weird clothes. In Bhaktapur, the festival lasts for eight days. The origin of this celebration goes back to the reign of the Malla rulers. It is said that the Malla Queen was in mourning for a long time after the untimely death of her son. The king in an attempt to console her asked every family that lost a loved one to come out in a procession to show the queen that she was not alone with her suffering. That is why there is much joy and joking during the procession that goes through the streets.

Saya, or Gai Jatra, is a joyous festival of the Kathmandu Valley that celebrates cows and the impending abundance of the harvest season. Jatra in the Nepali language means “street festival” making the celebration of Gai Jatra a public and community affair.

Like many of the other jatras celebrated throughout the year, Gai Jatra contains lively costumed street processions that move through the centers of the old cities of the Valley. It is celebrated during the middle of the monsoons when Newars replant their rice—this year occurring in late August. In addition to agrarian cycles, Gai Jatra also honors the dead. According to local beliefs, it is the one day that souls can enter into the world of the dead without having to go through the suffering of multiple rebirths. Cows actually help guide the soul of the deceased to heaven.

Honoring the dead: Cows as guides

Because cows are believed to guide souls, during Gai Jatra, anyone that has had a family member pass away is supposed to lead a calf during the procession. However since many families cannot afford a calf, most dress a child in a cow mask as a substitute, and these children walk in the procession instead. Newars will also create cow effigies out of bamboo to parade around.

Gai Jatra and the monsoon season

Despite the solemn theme, Gai Jatra is a grand celebration full of merrymaking and fun. After the procession has concluded, the rest of the day is filled with street performances of dances, plays, and comedic routines—making it an incredibly light-hearted affair. Decorations and costumes are an important part of the day. Like the art objects in our current exhibition, Nepalese Seasons, these decorative creations for Gai Jatra are largely influenced by the monsoon cycles. However, these creations are intended to be temporary and are remade every year for each new festival, so visitors won’t find any items made during Gai Jatra in the Museum

Connecting the festival to the end of the monsoons, some Newars will wear a sacred thread on their wrists that will then be removed during the Lakshmi festival about two months later. Once the Lakshmi festival comes, they will take the thread and tie it to a cow’s tail as a blessing.

Gai Jatra fundamentally began in the 17th century when King Pratap Mall lost his young son. The queen was immersed in great misery and cried all day and night because of the unfortunate death of her son. The king could not see his beloved in such a miserable situation and he tried all the possible efforts to improve her situation. However, all the attempts went in vain and she keeps spending her days drowning in grief.

After all the attempts, the king asked to organize a parade in which one member of every family that had suffered a loss that year would take part. He told everyone to dress up in a crazy and funny way with colorful decorations and gave freedom of speech where you can troll anyone with funny jokes and anything inappropriate on this day. Every sort of buffoonery and satire was permitted. All this parade passed along the main gates of the royal palace and the king explained to the queen that death is a natural phenomenon and not only us there are numerous people who are suffering from the death of their loved one. The cow procession, drum-stick music, and dance, silly jokes, mimicry of high personalities, masked dance are the major highlights of the parade, and the queen eventually smiled and accepted the loss of her son. The king was overwhelmed with happiness and established this tradition as the Gai Jatra festival and they even decided to include jokes, mimicry, and sarcasm as a major part of this festival.

How is Gai Jatra celebrated?

The members of the deceased family send a cow for the procession. During the morning, the cows are bathed especially in the tail part, and people from home worship the cow and put Tika on their body and forehead and decorate them with garlands. The cow’s procession began with the parade in the different parts of the city around Kathmandu valley. These days, cows are not easily available in the city, so young boys from the family dress up like a cow and celebrate this festival. Later, they are involved in various cultural programmes on this day. When the parade passes through the street, people offer food, gifts and money to the cow owners or cowboys. This kind of giving practice believes that it brings luck in the coming