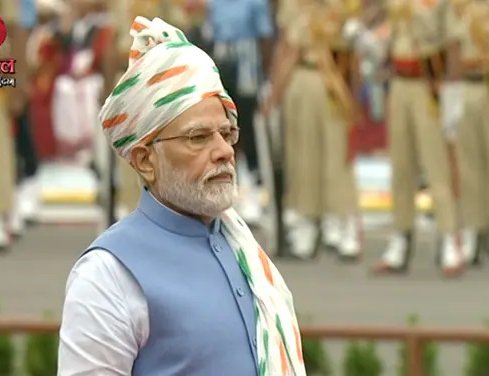 PM Modi said the completion of 75 years of Independence was a time to step towards a new direction with a new resolve.

Prime Minister Narendra Modi today led the Independence Day celebrations from the ramparts of the Red Fort in New Delhi.

"Our tricolour is waving in its full glory not only in India, but in every corner of the world," the Prime Minister said in his address to the nation.

He said the completion of 75 years of Independence was a time to step towards a new direction with a new resolve.

"During our freedom struggle, there was not one year where our freedom fighters did not face brutality and cruelty. Today is the day when, as we pay them our respects, we need to remember their vision and dream for India," PM Modi said.

This Independence Day, Prime Minister Narendra Modi used paper notes, and not a teleprompter, in his address to the nation. This was his ninth address from the ramparts of the Red Fort.

"Until and unless, people have the mentality of penalizing the corrupt, the nation cannot progress at the optimum pace. Another evil we need to come together against is nepotism. We need to give opportunities to this who are talented & will work towards the progress of the nation," said PM Modi.