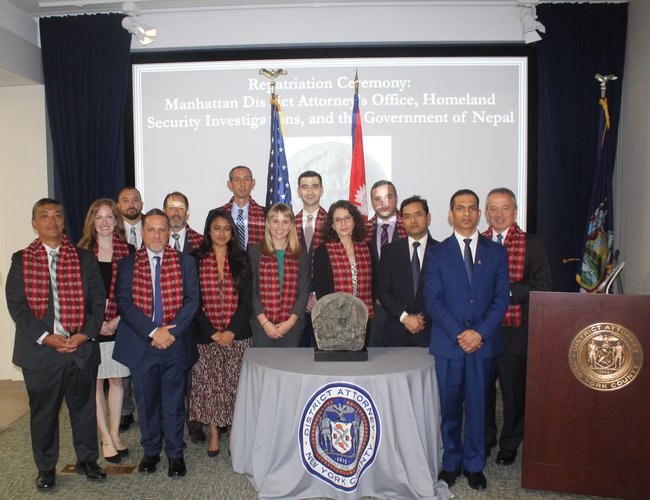 The Consulate General of Nepal in New York and the Manhattan District Attorney’s Office in New York jointly announced today the recovery and repatriation of Nepali antiquity to Nepal. Following the announcement, Acting Consul General Bishnu Gautam received the antiquity for Nepal from the

Manhattan District Attorney’s Office, the US Department of Homeland Security Investigations, and the Department of Archaeology of Nepal collaborated in its recovery.

Receiving the art object, Acting Consul General Mr. Gautam expressed deep gratitude to District Attorney Bragg Jr. and the United States Department of Homeland Security Investigations in Charge Mr. Ricky Patel and their outstanding teams for their steadfast commitment and incredible cooperation. He conveyed gratitude from the Government of Nepal for their enduring efforts. This outcome has contributed to Nepal’s national efforts of recovery and reinstatement of her lost cultural properties.

While recalling a similar collaboration with the District Attorney’s Office in 2021 when three stolen Nepali antiquities were recovered from New York and repatriated to Nepal, Mr. Gautam expressed deep appreciation for the commitment and cooperation of the US authorities in the recovery of stolen cultural properties of Nepal.

District Attorney Bragg, remarked, “A single piece stolen from any country is one too many. The historical, artistic, and cultural values attached to the Durga Stele are immeasurable, and I am pleased it is

“We feel proud to be a part of this grand repatriation where a piece of history will be returned to its rightful home so that its history can be shared with future Nepali generations”.

The relentless efforts of Homeland Security Investigations and the Manhattan District Attorney’s Office is vital to disrupting the illegal trafficking of antiquities and ensuring these priceless artifacts find their way home.”

The Consulate will arrange to send the art to Nepal in coordination with the Department of Archaeology, soon. Ganesh Adhikari from the Consulate General and senior officials from the Manhattan District Attorney Office and Department of Homeland Security Investigations, including Acting Deputy Special Agent Mike Alfonso; Assistant District Attorney and Chief of Antiquities Trafficking Unit and the Senior Trial Counsel Col. Matthew Bogdanos; Assistant District Attorney Bradley Barbour; Supervising Investigative Analyst Apsara Iyear; and Investigative Analyst Daniel Healey, among others, were present on the occasion

Japan Government And UN-Habitat Implement The Project In Nepal, Cambodia And Sri Lanka By NEW SPOTLIGHT ONLINE 1 hour, 57 minutes ago

Incredible Opportunity To Visit Patan Durbar Square In Nepal: US Under Secretary Nuland By NEW SPOTLIGHT ONLINE 5 hours, 14 minutes ago

US Wants To Make Its Collaboration And Strong Economic Relation With Nepal: US Under-Secretary Victoria Nuland By Agencies 11 hours, 40 minutes ago