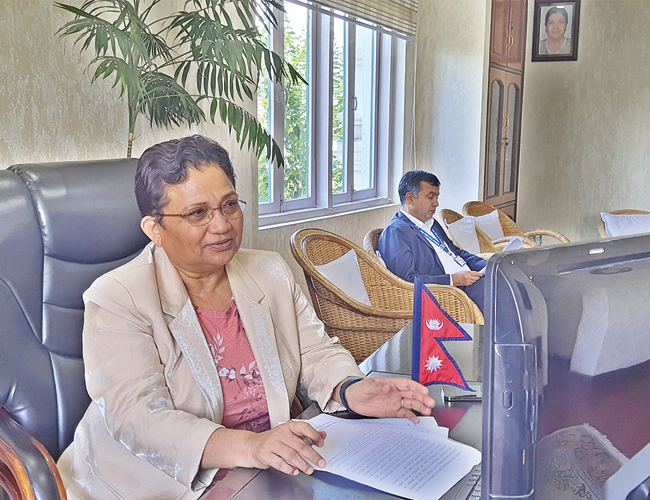 Minister for Energy, Water Resources and Irrigation Pampha Bhusal has said that more opportunities should be found with collective efforts to raise investment for 'green energy'.

She emphasised that the world should focus on the promotion of 'green energy' by promoting climate finance.

"The world should focus on the promotion of clean energy. That requires a collective commitment to climate finance," Minister Bhusal said while virtually addressing a session on "Unlocking climate finance for green grid investment" of the forum on “Climate Initiatives to Finance Climate Action and the SDGs" meeting held on Thursday in Bangkok, Thailand for the preparation of COP-27.

She said that Nepal is among the most vulnerable nations to climate change with the country’s delicate topography, climate-sensitive livelihoods of the people and their limited adaptive capacity.

Minister Bhusal said that despite being a least developed country, Nepal has contributed significantly to achieving the goal of ‘1.5-degree temperature' and said that it is time for the countries of the world to work with ambitious goals for reducing carbon emissions.

The hydropower generated in Nepal would be more if the annual energy consumption rate is taken as a base, she said, adding that Nepal would become a country that exports hydroelectricity throughout the year from 2025.

She said, "We are taking appropriate initiatives for the production of green hydrogen by using the surplus energy.”

“I believe that this forum will underpin our collective efforts and create more avenues for 'unlocking climate finance for green grid investments’,” she said.

Referring to the introduction of 'One Sun, One World and One Grid' in COP-26 according to the Green Grid concept, she pointed out the need to increase the capacity of transmission line construction and infrastructure development in countries like Nepal to fulfill the global concept of green energy.

Minister Bhusal said that renewable energy hydropower is being used in large amount in Nepal and said, "There is enough potential for solar energy production in Nepal as well."

Stating that Nepal has started using clean energy, she said, "In the last decade, we have expanded access to electricity widely. More than 95 per cent of the households of the country have been electrified through grid and off-grid solutions and we aim to achieve universal electricity access by 2024.”

NEPALESE ECONOMY Growth 5 Percent By A Correspondent 5 days, 7 hours ago