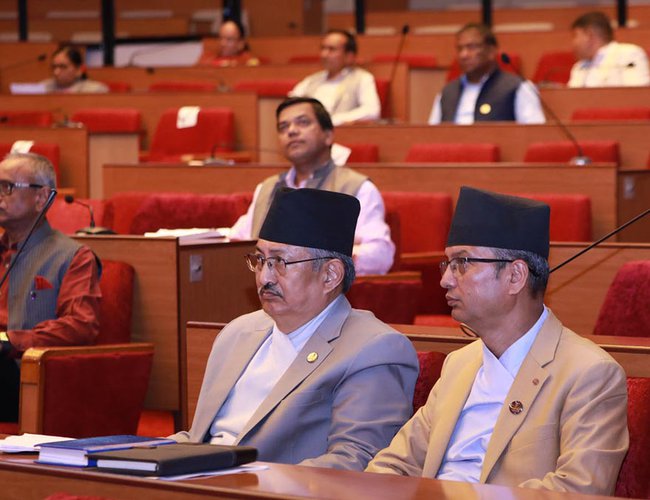 The National Assembly has passed the Nepal Citizenship (First Amendment) Bill, 2079 with majority of votes. Home Minister Bal Krishna Khand tabled the bill in the NA session on Friday.

The Upper House received the bill sent by the House of Representatives along with a message after passing it again. Earlier, President Bidya Devi Bhandari had returned the bill to the parliament for reconsideration.

Responding to the queries on the bill in the session, Minister Khand said the bill was brought to provide citizenship certificates to all Nepali citizens. The government intended to consolidate country's nationality and it was common responsibility of all to resolve problems surrounding the citizenship, he said.

There is a provision related to citizenship in the constitution that was passed in 2072 with a consensus of all political parties, he made it clear.

The government has taken initiatives to provide citizenship cards to Nepali citizens who have been long deprived of the constitutional document, he said.

"A citizenship certificate is very important and sensitive issue. It is intertwined with nationality, independence and territorial integrity. It is connected to life and death of a citizen. The issue is related to whether or not a Nepali citizen gets his/her identity or lives a life being a Nepali citizen," the Minister observed.

Earlier, the lawmakers taking part in the deliberation had suggested that the bill should not be made an issue of contention between the ruling and opposition parties.

As the citizenship bill is related to nationality, all political parties should have common stand on it, they argued.

National Assembly party leader of major opposition CPN UML, Khimlal Bhattarai, however, said the passage of the bill sent for reconsideration from the President by the House of Representatives as it was had downplayed the image of parliament. He argued that international practice could be taken into consideration on the time to confer naturalized citizenship.

Lawmaker from the CPN (Unified Socialist) Beduram Bhusal viewed it was too negative to make disrespected comment in the meeting held to forge common understanding on the citizenship bill.

Moreover, lawmaker Suresh Ale Magar said the passage of the citizenship bill as it was by the Lower House after President's call for reconsideration was constitutional.

Lawmaker Urmila Aryal said the passage of the bill would ensure citizenship to tens of thousands of Nepalis. (RSS)