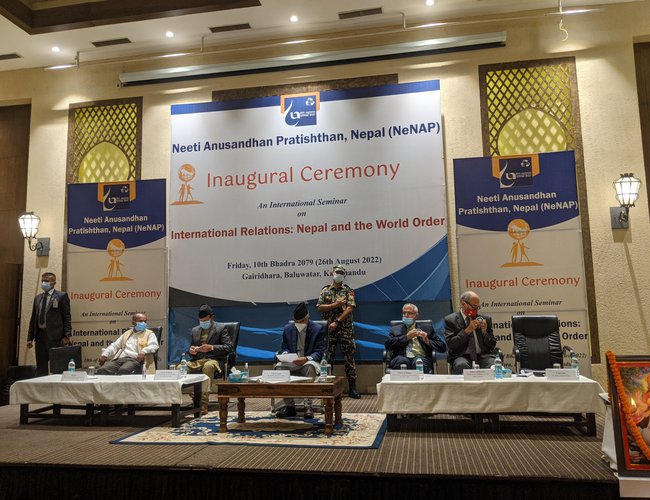 At a time when there is a growing debate over what should be Nepal’s position in the global world order, the statements by two diplomats in a recent seminar on Nepal’s future role in the new global world order are highly significant.

At a program hosted by Neeti Anusandhan Pratistahan in the presence of Prime Minister Sher Bahadur Deuba and foreign minister Dr. Narayan Khadka, the statements expressed by two diplomats received wide appreciation from the crowd.

Despite the change in the global order with the normalization of relations between Israel and Gulf and Arab countries, Nepal is yet to change its policy on Israel. Nepali political leaders in the 1960s won the heart and minds of small countries like Israel taking a daring decision to establish diplomatic relations.

According to UN voting records, Nepal seems to have blank policy to vote against the state of Israel standing with Iran. However, the Israeli ambassador to Nepal Hanan Goder admired Nepal’s daring decision publicly.

At a time when a section of people is criticizing the U.S for its activities terming them anti-China, Acting Deputy Chief of Mission of U.S Embassy Mark Templer has made it clear saying the United States wants to see Nepalis as pro-Nepal but not as pro-Chinese, Pro-Indian or pro-American.

"Nepal is not only known for its amazing people and beautiful scenery, but also because of its strong commitment to democracy, human rights, and global peace," said Acting Deputy Chief of Mission of U.S Embassy Mark Templer.

Acting Deputy Chief of Mission Mark Templer delivered his remarks in Nepali for an event at the Neeti Anusandhan Pratishthan. He described how Nepal and the United States have been working together for 75 years to build meaningful people-to-people ties between our two democracies.

Prime Minister Sher Bahadur Deuba said that Nepal has enjoyed cordial and good relations with neighbors, big partners and other countries. He said that Nepal firmly favors multilateralism in the world order which should benefit Nepal.

Prime Minister Deuba said that Nepal favors an order which protects and guarantees sovereignty, equality and independence of all the countries. “As a peace-loving country, Nepal also wants peace all over the world,” said PM Deuba

Inaugurating International Seminar on International Relations: Nepal and the World Order, prime minster Deuba said that Nepalese foreign policy is guided by the letter and spirit enshrined in the Constitution of Nepal like non-alignment, UN Charter and non-interference and sovereign equality.

Prime Minister Deuba said that Nepal is in the process of graduating from LDC to a developing country and seeks support from Nepal’s neighbors and big development partners.

Addressing the program as a guest, Ambassador of Israel to Nepal Hanan Goder said that the world has changed a lot, particularly in the Middle East and Nepal. The Ambassador said that Israel has already established diplomatic relations with the countries in Gulf and Nepal has transformed from monarchial to republican.

The Ambassador said Nepal’s support and favor were bigger. He said that all 193 UN Member countries, whether big or small, are equal.

Addressing the gathering in half Nepali and half English, Templer said that Nepalis have proved that they are committed and dedicated people to go for everything given an opportunity. He named a few Nepali Americans like renowned designer Prabal Gurung and others. He said that many Nepali Americans have been doing good jobs in the United States and all over the world.

He said that the United States wants to see Nepal as a prosperous, democratic and peaceful country. He said that the younger generations of Nepali people have to play a much bigger role to make the future better.

At the program attended by foreign minister Dr. Narayan Khadka as a guest of honor, people from various walks of life were present during the inauguration ceremony.

Dr. Deepak Kumar Adhikari, in his keynote, said that the role of countries like Nepal is very important in the new world order.

Adhikari said that Nepal is chosen as the venue for the conference because Nepal and India had unique kinds of relations where citizens of both countries not only shared culture and civilization but also shared a common open border with free movement of people. He said that all younger people in the two days gathering will come out with a future direction for Nepal’s foreign policy in a new order.

Delivering welcome remarks Dr. Binaya Kumar Mishra, convener of the seminar, said that the objective of the workshop is to find out how shared culture and civilization can play role in the new world order. He expressed the hope that the new generation of scholars and leading youth will come out with good guidance for the future of Nepal’s foreign policy.

Though they are foreign diplomats, the statements delivered by ambassador Godar and acting DCM of U.S. Embassy Mark Templer have clear messages for Nepalis to be Pro-Nepal.