Just a few months away to start UNFCCC COP 27 in Egypt, Nepal has started discussion targeting among others: net zero carbon from 2022-2045 & become carbon -ve after, maintain forest cover to 45% by 2030 and green energy 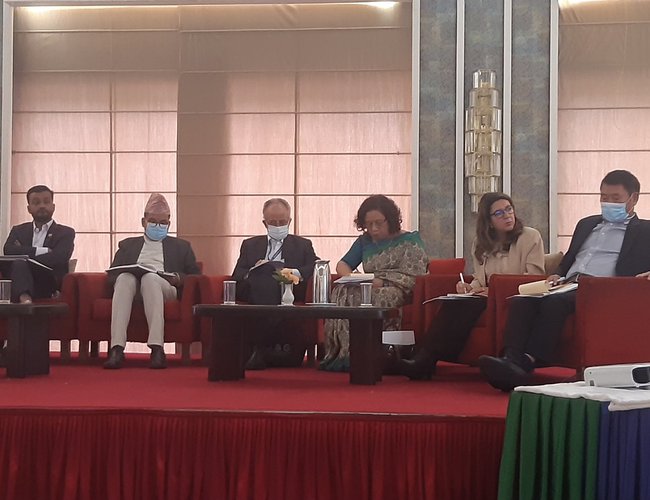 With the confidence built in COP 26 summit in Glasgow thanks to the opportunities offered by the host British Government, Nepal is heading to take part in COP 27 with a clear agenda and target in Cairo.

Unlike in Glasgow, Nepal’s agenda will not be highlighted in the opening in Cairo but Nepal has prepared its agenda and target to meet the commitment expressed by the country.

Announcing to remove the LPG from kitchens and promote green electric vehicles, Nepal has already started the journey to achieve zero carbon by 2045. Forced by the global fossil fuel crisis and prices, Nepal has made a new attempt to promote domestically generated surplus hydropower.

Organized by the Ministry of Environment and Forest, half day round table discussion on Nepal’s strategic engagement in the 27th Conference of the Parties (COP27) of the United Nations Framework Convention on Climate Change (UNFCCC) discussed the agenda faced by mountainous countries like Nepal due to rising temperature. 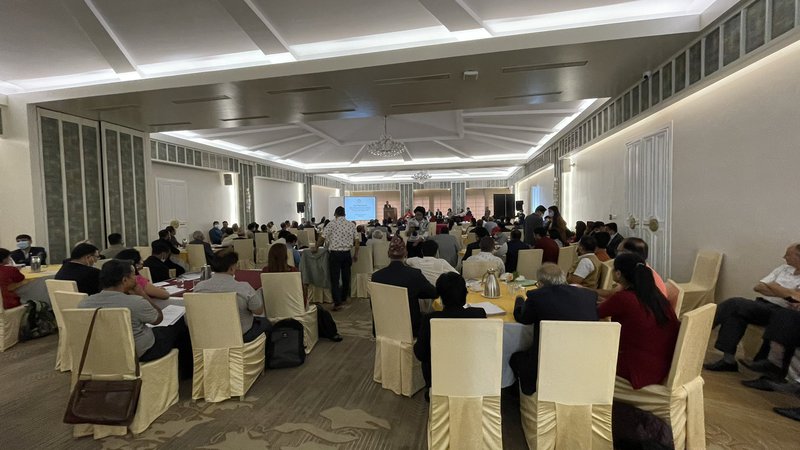 Representing various groups, the participants suggested maintaining Nepal's targets among others: net 0 carbons from 2022-2045 & become carbon -ve after, maintain forest cover to 45% by 2030.

Discussed focusing on the agenda and issues by participants, three hours-long meetings was intense and broader in terms of participation concerns. The issues raised by stakeholders were diverse and focused on consequences faced by Nepal and integrating and coordinating among three tiers of governments federal, provincial and local.

“Nepal will finalize climate financing strategy and NDC implementation plan before cop27. We need national solidarity to be effective in dealing with climate change and most importantly taking,” said Kandel

Another milestone as #Nepal picks up speed in its #Climate Action consulted on the roadmap to @Cop 27 in #Egypt with partners’ #Ambition #Adaptation #Mitigation #Finances #Loss and Damage #Gender,“ tweets Ayshanie, UNDP Resident Representative for Nepal, who also attended the meeting.

“Nepal's targets among others: Net 0 carbon from 2022-2045 & become carbon -ve after, Maintain forest cover to 45% by 2030. Ensure vuln ppl are protected from #Climate Change. Discussion ongoing on how to meet these targets & Nepal’s strategic engagement in the #COP27 of @UNFCCC what could be the possible agenda for Nepal in #COP27 ?”

“We have plans, policies and a roadmap for Climate Action. The time has come to translate it into action. For this, we need capacity dvt, resources and technology,” said Dr. Kanel.

“Government will finalize climate financing strategy and NDC implementation plan before cop27. We need national solidarity to be effective in dealing with climate change and most importantly taking,” tweets Bimal Regmi, a Climate change specialist who attended the meeting.

As Nepal is a Party to the UNFCCC and has ratified the Paris Agreement, it has a high stake in the outcome of the UNFCCC 27 negotiations process. As a Least Developed Country, Nepal has been actively participating in the COP negotiation process.

“With the endorsement of various agreements, Nepal has ensured a favorable policy environment for dealing with climate change issues. “Nepal’s presence in COP26 was visible because we had made good preparation. Among the LDCs country, our preparations and commitments were visible. For this, we have to pass a climate finance strategy,” said Secretary Dr. Pem Narayan Kandel. “Nepal needs to be more visible in COP27.”

With commitments and implementation of a strategic plan of action for adaptation, mitigation, Gender and social inclusion, and budget coding, Nepal has already proved that it is committed to the process. “We have a road map, a clear vision for 2045. We need to have a climate action strategy, capacity and resources. The challenge before us is how to translate our ambition into reality,” said Dr. Kandel. 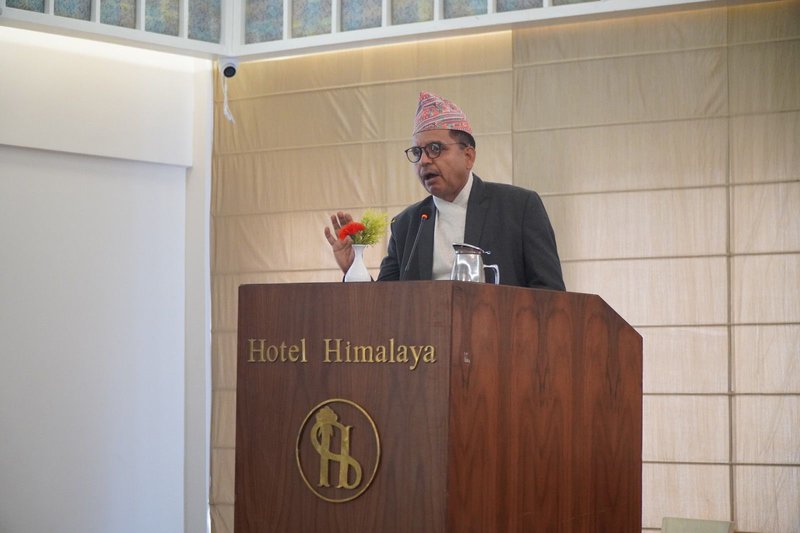 “We are taking this agenda at provincial and local level governments to have built the solidarity and cooperation to implement our commitments,” said Secretary Dr. Kandel.

Nepal is among a few countries to have endorsed most of the agreement and made action plans on par with the resolution of the UNFCCC. Some of the action plans including zero-emission has already in the implementation stages.

“During the Bon meeting, Nepal had presented priority and progress as an LDC,” said Dr Buddhi Sagar Paudel, Chief of Climate Change Management Division, in his presentation on Looking Back: Nepal’s Raised Ambition in COP26 and Road to COP27: Government’s Preparation for Strategic Engagement in COP27.

Dr. Paudel, Chief of the Climate Change Management Division said that Nepal has demonstrated strong leadership in taking domestic climate action and inviting development partners and stakeholders to be part of this journey recognizing that the participation of all relevant stakeholders is very crucial to contributing toward the implementation of the National Climate Change Policy and action plans.

In November 2022, Egypt will host the 27th Conference of the Parties of the United Nations Framework Convention on Climate Change (UNFCCC) in Sharm El Sheikh, to build on previous successes and pave the way for future ambition.

“COP27 will be a moment for countries to fulfill their pledges and commitments toward delivering the objectives of the Paris Agreement to enhance the implementation of the Convention,” said Dr. Paudel. 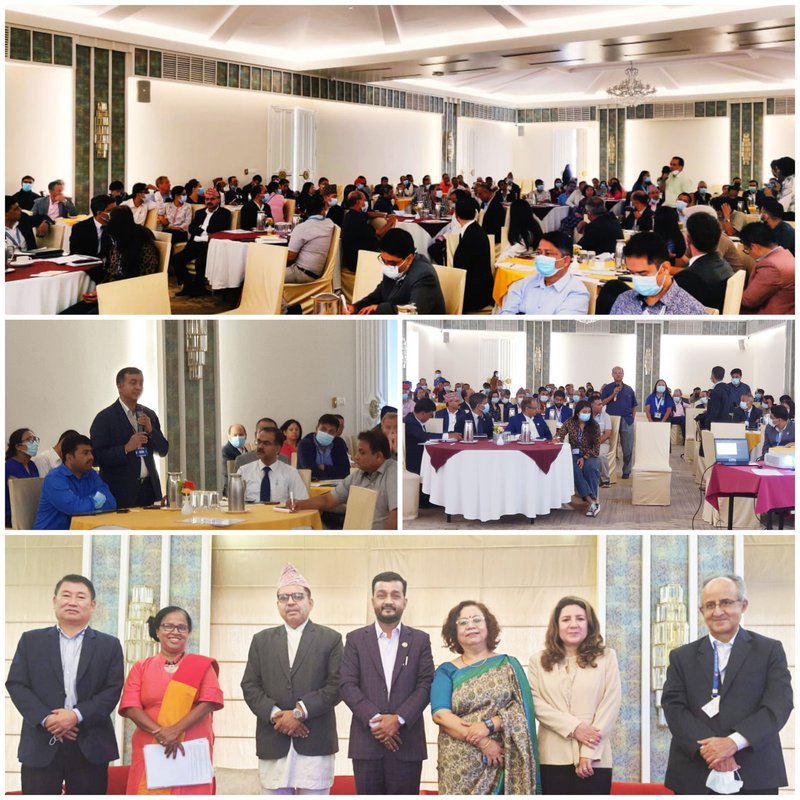 Building on this leadership on climate action, the Government of Nepal during COP 26 announced its world-leading commitment to remain cumulatively ‘net zero carbon’ from 2022-2045 and become carbon negative after that, halt deforestation and maintain forest cover to 45% by 2030, and ensure all vulnerable people are protected from climate change by 2030.

“ These commitments have made Nepal among the highest climate ambition countries in the world. Along with these commitments, Nepal has estimated about 46 billion USD is needed by 2030 to meet its adaptation and mitigation targets,” said Dr. Paudel in his paper.

The Government of Nepal proactively aims to engage more strategically and effectively at the national and international levels to raise awareness of the needs and priorities of Nepal, especially the mountain agenda.

With this Nepal has an unprecedented opportunity to ensure its heightened international profile on climate change and in leveraging and mainstreaming non-traditional and low carbon financing. Also, it is important to ensure that UNFCCC policies and funding instruments will be of benefit to Nepal. In this regard, MoFE aims to organize a round-table discussion with key partners and stakeholders to discuss the aspects of strategic engagement in the COP27 and develop an understanding of priorities and shaping up Nepal’s position in COP27,” said Dr. Paudel.

“The roundtable discussions also sought to leverage the climate leadership of development partners and stakeholders to accelerate Nepal’s strategic engagement in COP27, building upon the raised aspirations in COP26,” said Dr. Paudel.

The specific objectives are to Foster partnerships with different stakeholders in the COP27 preparation process, develop an understanding of themes-based priorities of different partners, get their feedback, and take forward these in shaping up Nepal’s Position in COP27 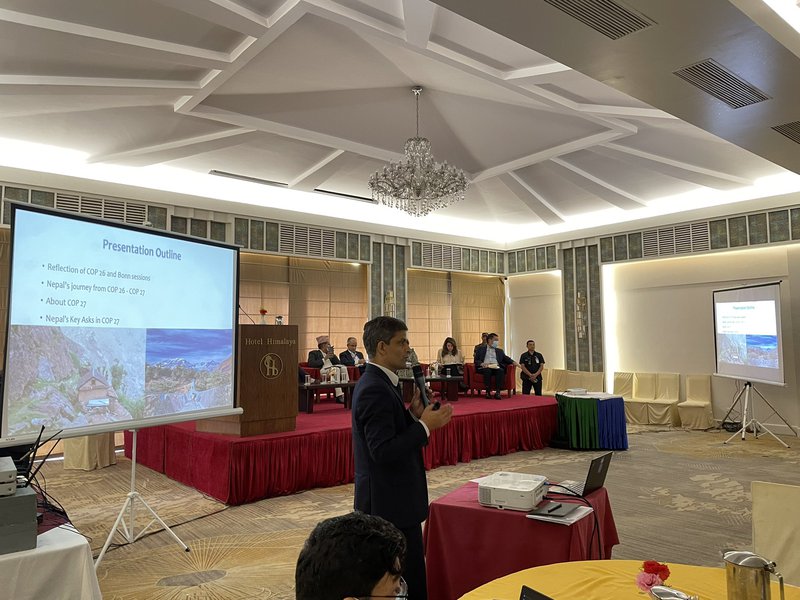 With key questions, how can Nepal are effectively engaging in COP27? – Position of Nepal, what to showcase? How to make good use of the delegate’s presence? And how can one contribute to the process with institutional and collective efforts? the participants tendered their views.

The programs also organize to see how participants can use the network of development partners/donors and others to advocate for Nepal’s Position.

Expressing their political commitments as a minister, Forest and Environment Minister Pradeep Yadav said that Nepal will have a strong team and strong agenda for the COP 27. “ Climate change is a major issue for us as Nepal has been facing floods, landslides, loss of agriculture productivity caused by extreme weather,” said minister Yadav.

Minister Yadav also said that Prime Minister Sher Bahadur Deuba has himself announced a program to replace the LPG and fossil fuel vehicles by promoting hydroelectricity. “ We will achieve zero emission as committed in our NDC,” said the minister.

With the commitments from high-level political leadership and preparation by a strong technical team, Nepal will likely maintain its visibility among LDG groups in COP 27.