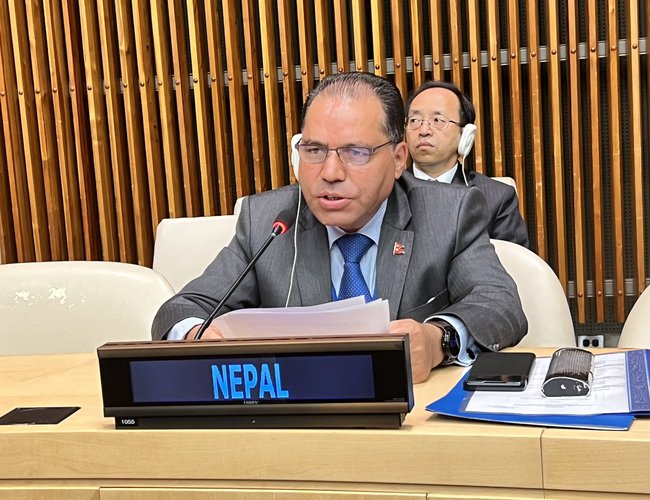 Foreign Secretary Mr. Bharat Raj Paudyal addressed the annual Ministerial Meeting of the Group of 77 & China (G-77 & China) on the sidelines of the 77th Session of the United Nations General Assembly today.

In the meeting, Foreign Secretary Paudyal stated that humanity faces multiple challenges arising from the pandemic, climate crisis, geopolitical tensions, and economic recession. People’s livelihood in vulnerable nations like the LDCs, LLDCs and SIDS were severely impacted by the problems like rising inequality, soaring food and fuel prices as well as financial and debt distress, he said.

He called for the timely implementation of internationally agreed goals and frameworks like 2030 Agenda, Paris Agreement, Addis Ababa Action Agenda, among others, as a way out of the crisis. Emphasizing on the importance of solidarity and cooperation at the global level, the Foreign Secretary underscored the need to fulfill ODA commitments and to utilize all forms of cooperation—North-South, South-South and Triangular—to accelerate global development. He reiterated Nepal’s solidarity with the group’s principles of unity, solidarity, and cooperation, and Nepal’s support for the cause of global peace and prosperity.

The Foreign Secretary also had a fruitful meeting with UN Under-Secretary General and High Representative Ms. Rabab Fatima. The discussion was focused on strengthening cooperation between Nepal and the UN on issues related to LDCs and LLDCs, and Nepal’s graduation from LDC category.

Remarks by Foreign Secretary of Nepal Bharat Raj Paudyal at the

Annual Ministerial Meeting of the Group of 77 and China. New York, 23 September 2022

I would like to express my sincere thanks to you, Mr. Chairman for convening this meeting and leading our Group during these difficult times.

I would also like to thank the G77 and China Secretariat for the professional services they have provided to the Group throughout the year.

At the outset, please allow me to extend our deepest and most sincere condolences to you, Mr. Chairman, and the Government and people of Pakistan, for the loss of lives and properties due to recent floods. We stand in solidarity with Pakistan at this difficult hour.

COVID 19 is still not only ravaging our economies, but also jeopardizing our efforts to eradicate poverty and achieve sustainable development.

Climate crisis continues to pose an existential threat to humanity. Many developing countries are experiencing the instances of floods, landslides, and fire like never before.

Food insecurity is rising, fuel crisis is soaring, and inflation is at record high.

This has exacerbated the persisting inequalities withing and between countries and aggravated liquidity crises and indebtedness of developing countries. The countries in special situation including LDCs, LLDCs, and SIDs, which are already in acute need of financial resources, are at risk of further relapse.

This warrants more solidarity and cooperation at the global level.

The developed countries must fulfil their ODA commitments.

We should redouble our efforts on North-South, South-South and Triangular cooperation for building back a better.

Global economic governance must be made fair, inclusive, and democratic so that developing countries are provided with a level playing field.

The countries like Nepal are bearing the brunt of climate change – for a fault of not their own. Nepal is one of the most vulnerable countries facing the climate crisis.

On our part, we have put in place the local adaptation plan to address the challenges and vulnerabilities of the people at the grassroots level.

We remain committed to realizing its net-zero ambition by 2045.

Developed countries must lead from the front by reducing emissions and providing climate finance.

As the largest intergovernmental organization of developing countries in the United Nations, G77 and China must redouble its effort to ensure that the fruit of development must reach the furthest behind first.

Nepal is committed to upholding the Group’s principles of unity, solidarity, and cooperation and supporting the cause of global peace and prosperity.

In conclusion, Chairman, as the largest negotiating block, our Group has the leverage to turn the tide for realizing our collective goals. Let’s utilize this strength for broader economic interests of developing countries while safeguarding multilateralism to garner global solutions for global problems.

World AIDS Day 2022: The AIDS Response Is In Danger By NEW SPOTLIGHT ONLINE 10 hours, 39 minutes ago