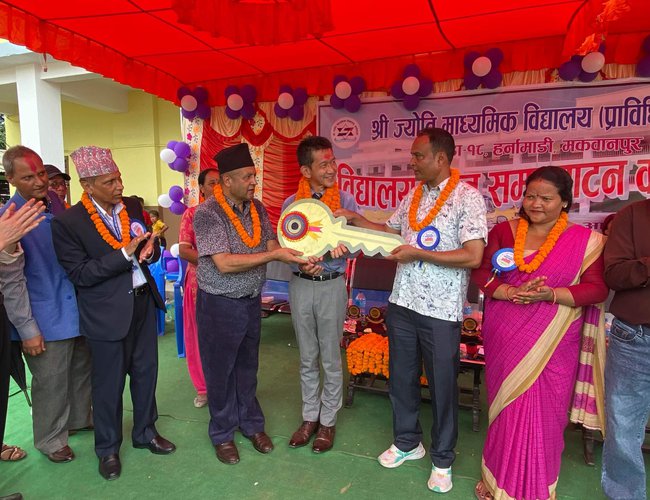 The newly reconstructed buildings of Jyoti Secondary School were handed over to the school management committee today. The school situated in Harnamadi, Hetauda-18, Makwanpur was damaged during the 2015 Gorkha earthquake. Since then the school faced difficulties in managing classrooms and education for the students.

The secondary school established back in 1967 AD (2024 BS) is now operating from Early Childhood Development (ECD) to grade 12 and has nearly 1,186 students. The reconstruction of the school structures started in January 2021 under the Emergency Reconstruction Project (ESRP) supported by JICA. The Project is being implemented by CLPIU - Ministry of Education, Science and Technology (MoEST).

The new buildings are reconstructed with multi-hazard resilient structures which are environment, child, gender and disabled friendly to provide an improved learning environment for the students based on the concept of Build Back Better (BBB) which increases resilience not only physically but also socially. The reconstructed buildings are designed to be a “complete school” which provides all the necessary facilities for the education of the students. In the new school blocks, there are classrooms with furniture, electrification, solar backup, playground, footpath pavement, and repair along with maintenance of existing buildings, which are also part of the scope of works.

Speaking at the ceremony, Rajesh Baniya, Deputy Mayor of Hetauda Sub-metropolitan City highlighted the instrumental role of the Government of Japan and JICA Nepal for the reconstruction and completion of the school buildings. He further assured to provide full support from the municipality for any other development endeavors for the school as well as the region.

Similarly, KIKUTA Yutaka, Ambassador of Japan to Nepal’s speech was delivered through a video where he thanked all the students for patiently waiting for seven years since the earthquake in 2015 for the completion of the new buildings. He further stated that this year Nepal is celebrating the 120th anniversary since the first Nepalese students were dispatched to Japan and Japan marks this anniversary as one of the “Japan-South Asia Exchange Year”. It was in the year 1902 when for the first time eight pioneer Nepalese students went to Japan for higher studies and came back to Nepal contributing immensely to the nation’s development through their work in various sectors. Likewise, he hopes to see all the students studying in this school play a leading role in improving people to people relationship between Nepal and Japan as well as contributing to the development of Nepal. 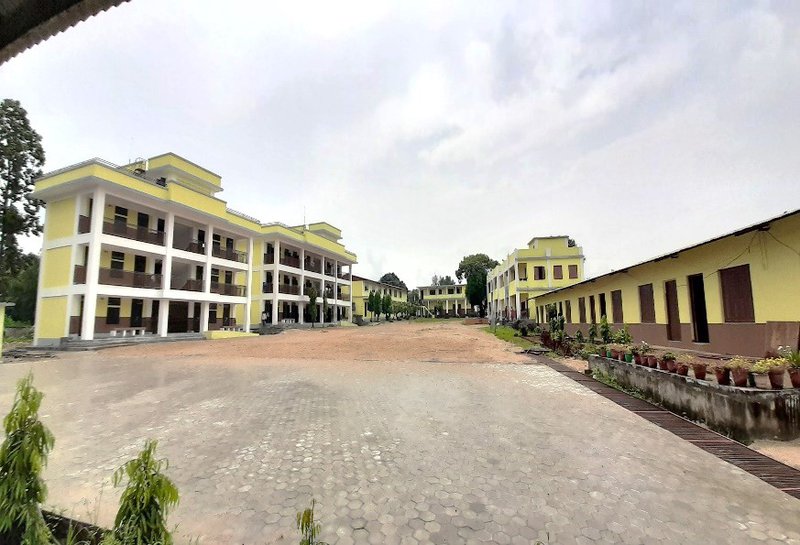 Akimitsu OKUBO, Chief Representative of JICANepal expressed his contentment in handing over such multi-hazard resilient school facilities. He further stated that although the school infrastructure is now complete the real testimony now lies in the appropriate utilization of the building, so that the future of all children is secured. He also requested the school management committee, and school team to give special attention to the operation and maintenance issue of the reconstructed schools.

Emergency School Reconstruction Project (ESRP): Total of 274 schools are being built, out of which 270are completed and 4are under construction (targeted to be complete by November 2022). The total cost for the project is JPY 14 billion(about NPR 12.7 billion) to support the reconstruction of disaster-resilient schools in Gorkha, Dhading, Nuwakot, Makwanpur, Rasuwa and Lalitpur Districts, based on the earthquake-resistant type design guidelines formulated by JICA under the principle of “Build Back Better”.