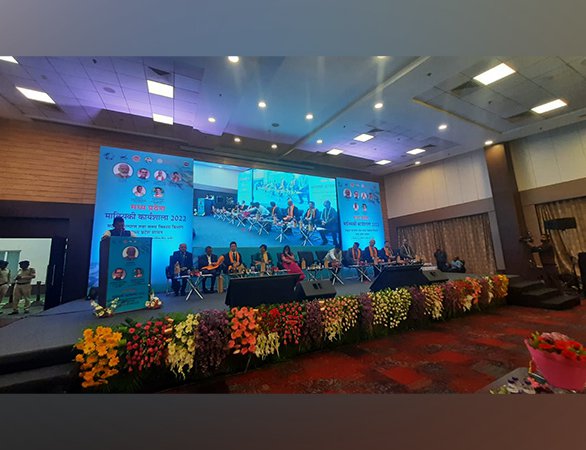 Minister of Water Resources, Fishermen Welfare and Fisheries Development, Mr. Tulsiram Silawat has said that the fisheries sector has an important contribution in the development of self-reliant Madhya Pradesh. Effective efforts are being made to promote marketing, branding and export of fisheries in the state. He said that the State Government is also paying special attention for the social and economic upliftment of the fishermen of the State. For this, many beneficial schemes and programs are being started and their benefits are being passed on to the fishermen.

​Minister of Water Resources, Fishermen Welfare and Fisheries Development, Mr. Tulsiram Silawat said in the workshop that many innovations have been started by the Fisheries Department in the state. These innovations being done by the state government will provide new employment opportunities to the youth of the fishermen society. New efforts are being made continuously in the field of making the state self-reliant. The fishermen welfare department is also not behind in this. We will be acquainted with international level experience from this workshop. Revolutionary changes will come in the field of fisheries in the state. Now the blue revolution in the country will start from the state. Efforts are being made that the economic condition of the fishermen should be improved and the Department of Fisheries Development should play an important role in making the state self-reliant.

Addressing the program, MP Shri Shankar Lalwani said that various schemes have been started by the Central Government to promote fisheries and for the overall welfare of fishermen. As a result of these schemes, fish production is increasing rapidly. Fishermen have also got social and economic security.

​While addressing the program, Joint Secretary, Fisheries Department, Central Government, Mr. Sagar Mehra gave detailed information about the schemes launched by the Central Government. He informed that Pradhan Mantri Matsya Sampada Yojana has been started by the Central Government. It is being implemented better. In Madhya Pradesh also, fishermen are getting better benefits of this scheme. He said that under the leadership of Prime Minister Shri Narendra Modi, special efforts are being made to promote fisheries. There has been a rapid increase in the growth of fisheries after the year 2014. The growth rate has been recorded at seven percent till 2021-22 and ten percent in the year 2022. He said that there is immense potential for employment and economic growth in the field of fisheries.

Principal Secretary Fisheries, Smt. Kalpana Srivastava informed that representatives of five countries including Japan, Vietnam, Thailand, Mauritius and Nepal also participated in this workshop. He has also signed MoI with the state. This will create new possibilities of marketing and export along with fish production in the state.

​The operators of fish department of more than 8 states of the country also participated in this workshop. He gave detailed information about the fish production and branding works being done in his state.

In the fisheries workshop, discussions and MoIs have been signed with representatives from different countries to provide a new market for freshwater fish produced in the state at international level. This will help in doubling the fish production in the state. Shrimp farming will also get a boost and shrimp production will be doubled in two years.

As the “Technical Partner” of “MP Fisheries Workshop 2022”, PHD Chamber of Commerce and Industry (PHDCCI) supported the Department of Fisherman Welfare & Fisheries Development, Government of Madhya Pradesh in organising this major program to promote the fisheries of Madhya Pradesh. PHDCCI also mobilised the senior international diplomats from five countries and brought a Knowledge Report on MP Fisheries. The diplomats shared their expression of interest to collaborate with the Government of Madhya Pradesh in the fisheries sector.

​Discussions will be held for the new role of fish farmers in the construction of self-reliant Madhya Pradesh, so that youth can be connected with employment by finding new employment opportunities. State investment is being made in the field of fish seed production and its processing along with fish production and there is immense scope for investment in this sector. Investment in this area will encourage export of freshwater fish internationally and locally. There will also be an increase in the income of fishermen and fish farmers.

It was informed in the workshop that the production of fish seed in the state in the year 2022 is 171 crore standard fry, which will be increased to 200 crore by the year 2023. Due to which the state will be made self-sufficient in the field of fish seed production. With the production of good quality seeds, improved seeds will be available to the fish farmers and there will be qualitative improvement in fish production. It was informed that so far 43 thousand 500 credit cards have been made for the fish farmers in the state.

​ ​In this workshop, an amount of 11 crores was also distributed by the Fisheries Federation under the Fishermen Incentive Fund and Aajeevika Sahayak Yojana. Smart fish parlors will also be opened for marketing in the form of innovation in the state. Along with this, it is also being considered to open fish corner for employment to the youth.

Along with this, 50 motorcycles, 100 Kisan Credit Cards, benefits of other schemes were also distributed to the youth of fishermen to help them for fish production and sale.

With the participation of state, national and international stakeholders, MP Fisheries Workshop 2022 organised in Indore to promote marketing, branding and export in the field of fisheries.

A large number of fish producers, fishermen and fish sellers took part, including representatives from 5 countries and eight states.