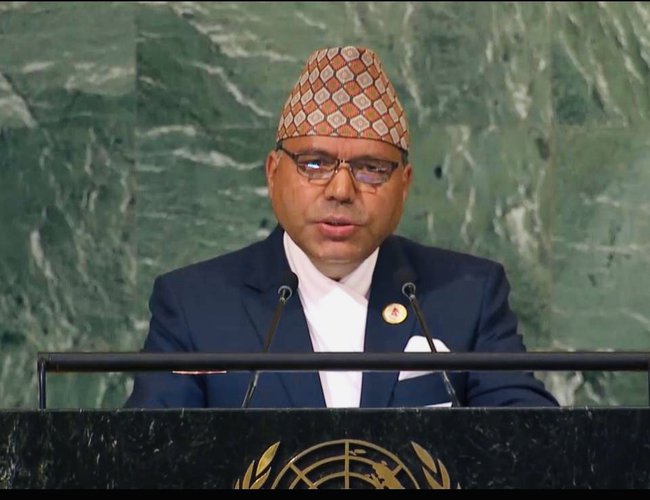 In his address, the Foreign Secretary outlined the threats to global peace and prosperity arising from the COVID-19 pandemic, geopolitical tensions, inequalities, and climate crisis and stressed for stronger solidarity and cooperation in the international system to overcome them. Accentuating pandemic control as the top priority for the world, he called for vaccine equity and universal vaccination to save lives. He mentioned that Nepal had vaccinated more than 96% of the target population while thanking neighbours, India and Chinaas well as development partners for supporting Nepal in the achievement of this milestone.

The Foreign Secretary stated that the interlinked global challenges seriously hampered the achievement of sustainable development goals, particularly for the countries in special situation like the LDCs, LLDCs, and SIDs. He mentioned that Nepal was on the path of graduation from the LDC category, in spite of the huge investment and capacity gaps for structural economic transformation and implementation of SDGs.

He called for enhancedlevel of development assistance, foreign investment, debt relief, aid for trade, and technology transfer in support of Nepal’s graduation process.

He also stressed the need forimmediate implementation of climate finance goals to address the climate crisis faced by developing countries and reiterated Nepal’s commitment to achieving net zero emission by 2045, as expressed by Rt. Hon. Prime Minister in CoP26 in Glasgow. He also urged for reforms of international financial architecture for an equitable economic order.

In his statement, the Foreign Secretary reiterated Nepal’s principled position on peace, security, and disarmament. Expressing concerns over the rising military expenditure in the world, he called for general and completed disarmament. He underlined Nepal’s opposition to threat or use of force against sovereignty, territorial integrity, and independence of any nation. He condemned terrorism in all its forms and manifestations and called for an early conclusion of a comprehensive convention against terrorism.

The Foreign Secretary reiterated Nepal’s unwavering commitment to human rights. He mentioned that the Constitution of Nepal had guaranteed universally recognized human rights and fundamental freedoms and had enshrined the principles of inclusion and participation. He also shared Nepal’s commitment to conclude transitional justice by addressing the concerns of the victims, complying with the directive of the Supreme Court, and abiding by the spirit of the Comprehensive Peace Accord and country’s relevant international commitments.

Paudyal expressed concerns about the situation in Ukraine, Afghanistan, Myanmar, Libya, Syria, Yemen, and the Middle East and urged all parties involved to ensure peace, security, and stability.

The Foreign Secretary shared Nepal’s commitment to promoting peace, security, and stability. Referring to Nepal’s contribution to the UN peace operations as the second largest troops and police contributing country, he expressed support for initiatives aimed at reforming UN peace operations. Condemning attacks against the peacekeepers, he underlined the importance of their safety, security, and dignity as well as the need for adequate training, resources, and modern technologies.

The General Debate of the 77th Session of UNGA is being held at UN Headquarters in New York from 20 to 26 September under the theme AWatershed Moment: Transformative Solutions to Interlocking Challenges.