EP DELEGATION Visit For Cause 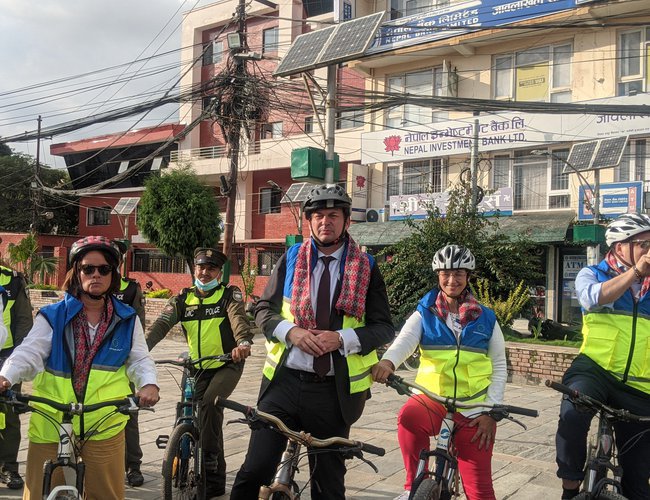 Instead of waiting for any formal programs, at exactly 4:30 afternoon, members of the European Parliamentary Delegation and Ambassador of the European Union Nona Deprez and staff joined 30 Nepalese young bicycle riders in a parade started from Jawalakhel to Nagbahil organized to mark the ‘World Car Free Day On September 22.

Although they arrived just early in the morning from Europe flying an almost seven hours flight, the visiting European Parliamentary (EP) Delegation led by Vice President Evelyn Regner joined the bicycle rally riding bicycles with Nepalese youths on the street of Patan.

Starting from Jawalakhel ground, 6 kilometers south of the capital of Nepal, the bicycle rally ended at the historic and culturally important place Nagbahal after completing about 2 kilometers.

Made for cyclists by Lalitpur Metropolitan City (LMC), the well-marked bicycle lane showed LMC’s commitment to a green and pollution-free city.

Along with the REGNER (Austria), Vice President of European Parliament, Ulrike MÜLLER (Germany), Tomáš ZDECHOVSKÝ (Czechia), and Maximilian KRAH (Germany, European Ambassador to Nepal Deprez and her colleagues from the Embassy followed around 30 Nepalese youth completed the journey showing the importance of bicycle.

For ambassador Deprez, the bicycle lane of Patan is familiar as she has been taking part regularly in the bicycles.

“I was so happy to join the bicycle rally with young Nepalese and travel at the historic city. This is something fascinating for me. Riding bicycles along with Nepalese young and energetic girls gave me immense pleasure and happiness,” said VP Evelyn Regner.

After the rally, EP delegate members participated in a discussion with the members of the Youth Sounding Board on gender, social inclusion and climate change. “This is a really good one to show solidarity with the global community for green development,” said Ulrike MÜLLER. This year’s ‘World Car Free Day’ coincides with ‘EU Climate Diplomacy Week’ on Thursday 22nd September.

During their interactions with various groups, the delegation members discussed matters related to inclusion, climate change, participation of women in politics and other issues.

They also discussed the issues of the Russian war and Nepalese solidarity with Ukraine and the Ukrainian people. This is a short but important visit to Nepal by a high-level European Parliamentarian delegation on the eve of national elections.

“Nepal Is A Beautiful Country “

When did you arrive and how do you see Nepal?

We just arrived on Thursday morning. We have the opportunity to talk to some politicians from different parties. They are very busy with the elections. This is my first visit to this beautiful country.

Kathmandu is a very lively city. This is also a city of young people. Nepal is a young country which is something great. We condemn the Russian War and we appreciate Nepal’s stand condemning the Russian Invasion and war in Ukraine. 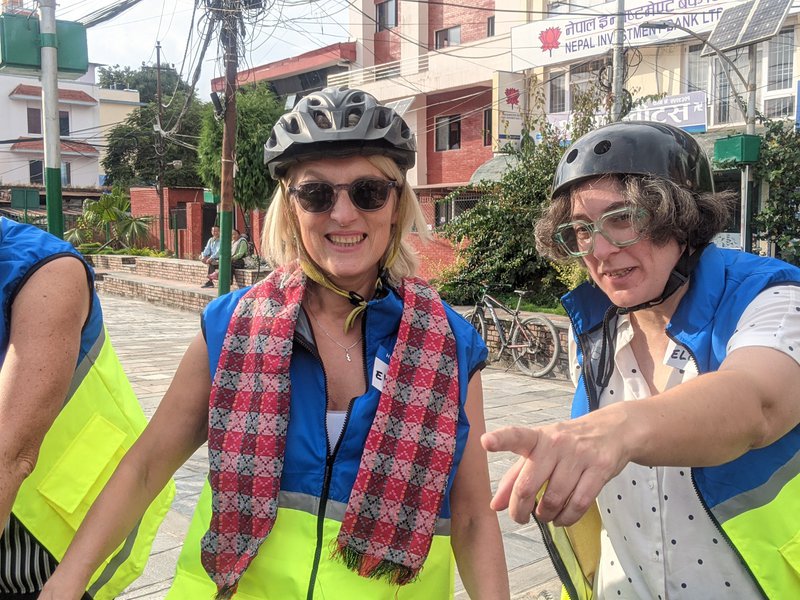 We have heard a lot of things and we will discover them during our two days visit. My picture of Nepal is not completed yet. After my interactions with political leaders and visits to the city, I will explain the full picture.

You are also interacting with young Nepali who will represent Nepal for the coming generation. How do you view this?

How about your delegation members?

We are four member delegation and we share common views. We all see Nepal as a small beautiful country with a lot of potentials. All of us are interested to support Nepal’s development activities further. EU can support Nepal in sustainable energy, hydropower and renewable energy. We won't see how Nepal is coping energy and food crisis. We are also interested to see Nepal’s agriculture sector and climate change issues. Sustainable agriculture is something important. There are a lot of issues to share.

How do you see women’s participation in Nepali politics?

As a woman parliamentarian myself, I always like to inspire women in politics and be strong. I want to see more women in Nepali politics. However, it seems that it is a long way to go. Since you have a good constitution, what Nepal needs is to apply it.

How do you see common between Austria and Nepal?

My home country Austria and Nepal have so many commonalities as both are mountainous countries. Austria has the Alps mountains and you have the Himalayas. It was a fantastic moment when we saw beautiful high mountains when our plane was approaching to land at TIA. This is something once in my life. It was really great. You have so many beauties a Nepal is a rich country in terms of nature Austria has also some world-renowned mountaineers who visited Nepal and climbed Mountaineers.

World AIDS Day 2022: The AIDS Response Is In Danger By NEW SPOTLIGHT ONLINE 11 hours, 23 minutes ago