Balen: Not A Media Product

Balen has especially inspired the youth with his capable ambition to make Kathmandu great again. 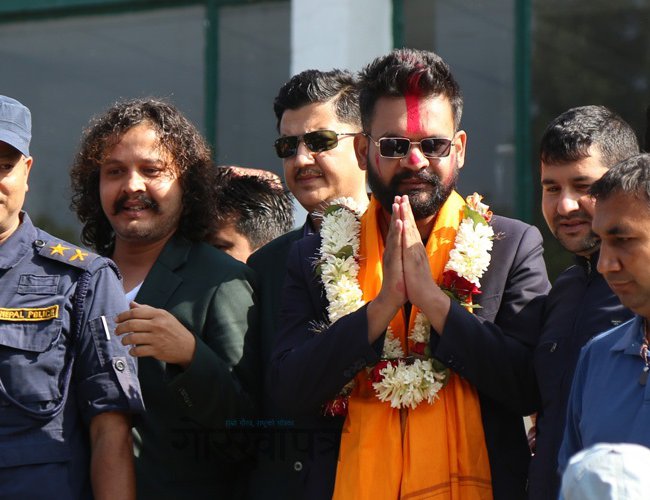 Balen: Not a media Product

Balen is not a media product, it is a spontaneous outburst of anger against established politicians and those who ignore the needs of the people - especially those who have been leading Nepal and Kathmandu Metropolitan City for the past five years.

Based on his experience and research, the voters of Kathmandu liked this young bearded candidate who speaks with a dignified voice with authority and is not afraid to take on the influential dinosaurs of Nepali politics. Meanwhile, some have called his activities a roaring river, while most people have liked and appreciated his activities.

Balen has especially inspired the youth with his capable ambition to make Kathmandu great again. When others spread condemnation and negativity, he gave them hope. Some opine that he is a river trying to drain the swamp of Kathmandu politics.

All columnists need to be prepared to prove themselves wrong now with their scripted sentences. The Balen incident has exposed the gap between mainstream media and Nepali society. The press is made up of a handful of people, and owned by a handful of people.

Balen's generation has no time for them, and to answer questions with the media they control. There is a radical new message going out: Nepali people must move forward themselves and no longer rely on mainstream parties and media to reflect their hopes and aspirations.

Now, according to the opinion of many people here, it should be kept in mind that illegal buildings are not brought by ship and train, but are built on the spot and it takes a long time to build them. Even in Nepal, we have District Administration Office, Forest Office, Ministry of Urban Development, Kathmandu Valley Urban Development Authority, Ward Office, Public Works and Kathmandu Metropolitan City and other departments and offices, how is it possible for those who build these big structures under the nose of these officials? When those buildings are under construction, why are the house owners or builders not being warned or the work being stopped? Why do you think these constructions come under the authority's eye only after they are completely constructed?

A large number of resources are spent to build these structures. On the other side of this, it was done in collusion, with political security, and the land mafia. It was also seen in the social network the opinion that whoever lost their property or house did not have to cry did it right. It should be done accordingly. Perhaps the investigative glasses will see it.

Destruction has cost to pay

Every such big construction involves big machines and crushers, which destroys the environment twice. First, they blast large quantities of dust particles into the atmosphere that affect the flora and fauna of nearby areas. Then when the order comes to demolish them, dust and debris are dozered, explosives are used and again the air is filled with dust and scenes of disaster.

In terms of ancient values, Nepal is a country that has adopted the welfare state system i.e. it is the responsibility of the state to protect the property of its citizens, protect the national borders and, if necessary, wage war against other countries to counter attacks or expand its territory. Such expansion is almost impossible in the current world order. They have the right to defend their borders but not the right to go to war to control another state's land. True democratic countries in today's world are 'welfare states'.

A welfare state assumes full responsibility for the personal and social welfare of its citizens and the protection of property in terms of special grants, concessions, or facilities for the needy from state funds. Each level of government looks after the physical and social needs of its population and makes adequate efforts to provide a minimum standard of quality living for all.

Basic characteristics of a welfare state

A country is a welfare state if it qualifies for the following provisions: 1. Constitutional provision for the role of the state in protecting and promoting the socio-economic welfare of the people, 2. Equal opportunities for all and not to envisage special provisions based on any class, caste, or caste representing individual or group identity, 3. The state and government have some defined role in the national economy – including the regulation of the economic activities of its citizens and enterprises under government control. 4. The state guarantees and maintains minimum social justice for the weaker sections of society. 5. The state formulates national policies and plans to achieve the socio-economic goals of the state by covering the entire community, especially the weaker sections of the society, in a balanced and planned manner.

Effective laws are adopted for the welfare and protection of workers working in enterprises that produce and distribute goods and services. Historical Evidence of the Welfare State in Ancient Hindu Society The ancient societies of Nepal or India cannot be expected to have all those features of the modern welfare state as mentioned above.

But, originally Hindu society had a welfare state. Almost all ancient Sanskrit state crafts and literature give ample examples of such provisions. Some such examples are given here as follows- When the fire was discovered in ancient Hindu society, it was accepted as the existence of "Brahma". For some scholars, the collective union of the Aryas was taken as Brahma and "yagna" was their system of collective production - collective labor and collective sharing in production. In this mode of collective production and distribution among the Aryas everyone was happy and satisfied and it was (1) a prosperous society. The ancient society described by Panini was a truly democratic society based on welfare.

The Buddhist way of life then had a great impact on the creation of a just and prosperous society where the welfare of every human being was ensured. In the "Mahabharata", there are many references to the welfare state. For example, the conversation between DevarshiNarada and King Yudhishtar I in the Srimad-Bhagavatam and hundreds of similar quotations in other Puranas richly describe the welfare state. They mention "prajaranjan" - people's happiness, people's compliance. "Welfare of the People" and "Protection of the People" - Protecting the people is the main task and duty of the state of the king and his people.

Kautilya in his evergreen magnum opus "Arthasastra" mentions that the ruler's happiness lies in the happiness of his people and his welfare in their welfare. Whatever is good and pleasant to his subject should be treated as something good and pleasing to him. Kautilya said that the weaker sections of society should be prioritized as audience along with kings and judges. They should travel on ferries for free. Women should be protected from exploitation and punishment should be provided for sexual harassment.

According to Kautilya, social security is a matter of both private and state. There can be a discussion on whether the methods and procedures decided by the city itself are effective. Since some cases are pending even in court, it is not appropriate to talk about them. In Kathmandu, there are many such structures built by violating the standards and without passing the map. Even though there are many 'big-big' people in breaking such rules, the common Nepalese have openly praised Mayor Balen's work.

After listening to the technical report of such buildings and the statements of the map owner, the chief will use his judicial mind to pass a fine or demolish any part of the building, and further action will be taken regarding the passing of the map. This procedure, contrary to the map, states that four steps must be completed before demolishing any part of the building.

First, the metropolis itself should ascertain whether any building or structure is in violation of the standards and building code. Second, the building map should be submitted to the mayor for a hearing if found to be in violation of past standards and codes. Thirdly, the mayor should look at the technical report of such buildings and give the nakshawala (landlord) an opportunity to present his views, and listen to his opinion. Fourth, after that, the mayor can use his judicial mind to pass the map by paying a fine or demolishing a part of the building and take further action related to the map pass.

This procedure set by the metropolis has absorbed the basic belief of the judicial process that no injustice should be done to anyone and even if someone has made a mistake knowingly or unknowingly, he should get a chance to be heard and have an opportunity to present his point. Laws and courts give an opportunity to have their say, even for people who have committed crimes as heinous as murder. If we look at the process adopted by the metropolis in recent days, we can see the crowd supporting Yesman.

There is no shortage of people who are free-spirited. Instead of finding out who has worked against the standards, and who has built a structure against the map, instead of letting those people have their say, the mayor suddenly reached with an excavator to demolish the structure by publishing a 35-day public notice. If the metropolis only follows the procedure set by itself, no one will suffer, there will be no injustice to anyone, and the metropolis will be able to demolish illegal structures.

We've tortured those elephants to get that ivory for our jewelry, we've dug holes in search of that gold for our currency, and we've plundered those forests to get the wood for our furniture. Its effects are due to the extinction of wildlife, climate change and global warming, pollution and deforestation. Alternatively, choosing destruction or development, some call it destruction for development. A necessary evil for the greater good. A bodybuilder calls it no sacrifice no gain, an economist calls it austerity for prosperity, and a chef says “you can't have an omelet without breaking an egg”.

Much of what remains of nature is now endangered and has become game parks and reserves. To see and experience vibrant nature, there is a need to visit tourist attractions, which are now rare. We've tortured those elephants to get that ivory for our jewelry, we've dug holes in search of that gold for our currency, and we've plundered those forests to get the wood for our furniture. Its effects are due to the extinction of wildlife, climate change and global warming, pollution and deforestation.

Destruction for development: Myth and reality

Alternatively, choosing destruction or development, some call it destruction for development. We define "green entrepreneurship; an activity that consciously addresses an environmental/social problem/need through the realization of entrepreneurial ideas with a high level of risk, which has a net positive impact on the natural environment and is at the same time economically sustainable." The planet wins, the people win and the companies profit. We learn to coexist with each other.

Where we benefit from the environment without causing much harm. We use our resources sustainably. We depend on renewable sources of energy for non-renewable sources. Where we cut down one tree, we plant another. When we dig into the earth, we fill the holes. We use more of the sun and wind for energy. We recycle our products as much as possible. Finally, if we are destructive we are destroying it for ourselves, if we are developing we are reserving it for ourselves. This is our home!

China’s Rapid Transformation And Lessons To Learn By Krishna Silwal 1 day, 4 hours ago

Youths In Nepal Elections: From Social Media To National Platform By Sangya Dhakal 3 days, 3 hours ago

Skeleton In The Sandook By Hemant Arjyal 4 days, 1 hour ago

An Overture Filled with Confusion By Dr. K. Uprety 5 days, 8 hours ago