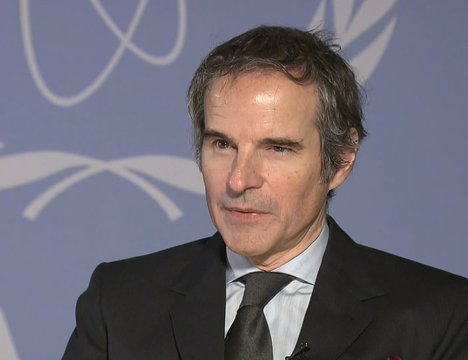 The head of the International Atomic Energy Agency will visit Russia early next week for discussions on ways to ensure the safety of the Zaporizhzhia nuclear power plant in Ukraine.

IAEA Director General Rafael Grossi's announcement on Friday comes after a series of recent scares at the facility, which is under the control of Russian troops.

He said shelling on Thursday has damaged a power line providing electricity to one of the plant's reactors, adding that the unit was forced to temporarily rely on emergency generators.

Grossi pointed out that the same unit also lost its external power supply in shelling on September 21, and temporarily ran on generators.

All of Zaporizhzhia's six reactors are currently in a state of cold shutdown.

Grossi said, "There is an urgent need to create a more stable environment for the plant and its staff."

Grossi says he will visit Russia for further consultations about an IAEA proposal to set up a protection zone around the facility.